Karen Darke added a second gold medal in the H1-2-3 time trial, the hand-cyclist's first Paralympic gold. Tandem duo Steve Bate and pilot Adam Duggleby then won their second gold of the Games with victory in the B time trial.

Storey - who won individual pursuit gold on the track to pass Tanni Grey-Thompson’s tally of 11 golds - was on a level of her own as she completed the two laps totalling 20km in 27:22.42.

Storey, 38, was over a minute-and-a-half quicker than Poland’s Anna Harkowska who took silver with American Samantha Bosco winning bronze.

"It is really exciting," Storey said after the race.

“I was so excited to race this morning. I woke up at about half-past four and I shouldn’t have, I didn’t need to wake up until ten to six. It was really, really cool. My time trialling has been going really well in the time trial races I’ve done in the UCI races and I’ve been part of our team time trial. It’s super exciting.”

Crystal Lane just missed out on joining Storey on the podium. The individual pursuit silver-medallist was fourth in 29:37.23.

Britain's @kdarke thought she might not make the Rio #Paralympics

Darke, a silver and bronze medallist at London, was 17 seconds quicker than American Alicia Dana after one lap of two.

And although the American reduced the deficit on lap two, Darke was 12 seconds quicker at the finish to take her place at the top of the podium.

WATCH @kdarke winning @ParalympicGB's second #gold of the day on the road - she stormed her H1-3 time trial https://t.co/3GZbH3TV48

“Three years ago I was hit by a car and thought I’d never ride again. I had an operation a year ago and I thought ‘there’s no way I’m going to Rio now that’s it’. I’m in shock.”

Ste Bate and pilot Adam Duggleby won a second gold in as many events in the tandem time trial. The duo had won the tandem pursuit on the track and carried their form to the road in a nail-biting finale to the 30km event.

The pair led at the 15km mark by just 11.59 seconds over Dutch riders Vincent Ter Schure and Timo Fransen and although the Netherlands riders produced a better second lap, Bate and Duggleby crossed the line in 34:35.33, eight seconds faster than their rivals.

"I can enjoy this one a bit more I think on the podium. The first one (on the track) wasn’t a surprise but we worked really hard for that. This one, we really wanted to win this for both ourselves and our physiologist Dan Henchy - he’s a big time trial man so it’s good to that one in the bag.”

“It’s a team effort,” Duggleby said. “We both train just as hard as each other, we train together a lot and have been doing loads of time trials at home. This was our main focus."

Bronze for Turnham and Hall

Lora Turnham and pilot Corrine Hall had also won individual pursuit gold on the track and added bronze in the tandem time trial over 30km.

They stopped the clock in 39:33.81, 34 seconds slower than winners Katie George Dunlevy and pilot Evelyn McCrystal of Ireland.

David Stone won bronze in the trike T1-2 time trial over 15km to collect his fifth Paralympics medal. The double Paralympic champion in Beijing completed the course in 24:42.25 - one minute and 44 seconds slower than winner Hans-Peter Durst of Germany.

Megan Giglia was also out to add a road medal to her track gold. Her time of 31:44.56 saw her take sixth in the C1-2-3 time trial as the Paralympic title went to Alyda Norbruis of the Netherlands. 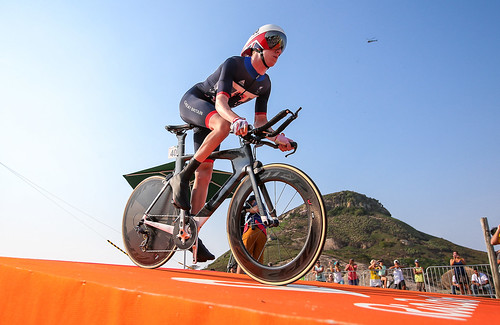