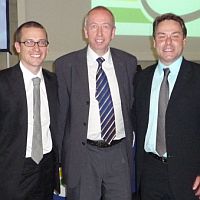 British Cycling and the UCI have signed a ‘Memorandum of Understanding' at the recent UCI Congress in Switzerland to create a worldwide Coach Education Programme designed to standardise and improve coach education in cycling.

The programme will be based on British Cycling's highly successful UK Coach Education Programme and draw on the expertise of its coach education team. By creating a worldwide coaching network, the programme will help train and develop a core group of international coach educators and help identify coaching talent.

John Mills, Coaching, Education and Development Director at British Cycling, has been appointed Project Director and will spend 40 days a year at the UCI directing the development of the new coach education programme.

He said: "Our involvement in this project provides a great opportunity to work in partnership with the UCI and to support the development of coach education and coaching around the world.

"This development, combined with the recent appointment of our President, Brian Cookson to the UCI Management Committee puts us in a great position to build on our existing relationship with the UCI."

"The invitation to join forces with the UCI is further recognition that Britain is not only a leading cycling nation but is also able to make a significant contribution to the development and globalisation of cycle sport."

The project will be overseen by Frederic Magne, UCI Director of Development and Director of the World Cycling Centre. Keith Flory, British Cycling's Coaching and Education Manager, will also be part of the new team having been seconded to the UCI for 17 months to manage the development and implementation of the project.