On 2 September 2013 the recommendations of ‘Get Britain Cycling’ report will receive a high profile attention when they are debated in the House of Commons. We set out how to get your MP to contribute to the debate. 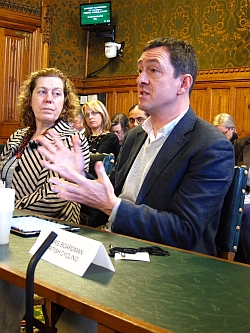 We all know that what cycling needs is political leadership.

Thanks to Julian Huppert MP and the thousands of you who signed the petition, we have a chance to move cycling further up the political agenda.

British Cycling is encouraging people to contact their local MP to ask them attend the debate on 2 September 2013.

On this page you will find a template which you can amend and address to your local MP. We have provided some standard text but it is helpful to talk about issues in your area.

This might include making roads better for cycling, more funding for cycling or getting more kids on bikes – anything you think is important.

The debate is hugely important to the future of cycling in this country. The Government has announced a significant funding package but now we need MPs to welcome this funding and ask for it be rolled out to all towns and cities.

The ‘Get Britain Cycling’ recommendations include: re-allocating transport investment to cycling equivalent to £10 per head of population, ensuring that cycling is planned in to all new developments, improving training for cyclists and drivers and lowering speed limits in residential areas.

This is the current text of the motion to be debated on 2 September 2013:

"That this House supports the recommendations of the All-Party Parliamentary Cycling Group's report 'Get Britain Cycling'; endorses the target of 10 per cent of all journeys being by bike by 2025, and 25 per cent by 2050; and calls on the Government to show strong political leadership, including an annual Cycling Action Plan and sustained funding for cycling."

Get Involved:  Find your local MP | Download the template letter