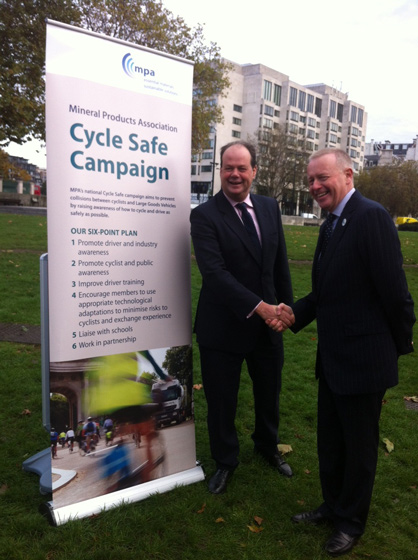 The event was held at Wellington Arch in London and gave people the opportunity to sit in the cab of a lorry and understand the drivers’ blind spots better. The event was also registering bikes for free to improve security.

As cyclists rode past, through Hyde Park, Stephen Hammond sat in the cab of a Hanson goods vehicle which demonstrated the blind spots which many goods vehicles have and the new mirrors the Mineral Products Association are introducing for all their members to improve blind spot vision. Speaking as he got out the cab, he was keen to emphasise the importance of education and changing behaviour to improving road safety such as exchanging places events which enable cyclists and lorry drivers to experience what it’s like for the other, on the road.

Later, at a meeting in the Houses of Parliament, Stephen Hammond was keen to show his commitment to improving road safety.

He said “taking steps to improve roads for vulnerable road users, and cyclists are one of them, is one of the most important things I can do as Road Safety Minister.”

Cycling and freight organisations were represented at the meeting and welcomed the Minister’s remarks, thanking him for his commitment to road safety and looking at all the different components of it.

Martin Gibbs, Policy and Legal Affairs Director responded “It’s good to see the new Minister taking an active interest in issues around HGVs and cycling. We know that last year HGVs are involved in a significant number of serious incidents with people on bikes. In 2010 HGVs accounted for 14 per cent of cyclists killed or seriously injured on the roads despite accounting for only 3% of total traffic in London. British Cycling is very much in favour of events like these which promote better mutual respect and understanding and we also need better national policy on measures to improve HGV safety and to ensure that these vehicles are designed to ensure the safety of other road users and are fitted with the best safety technology.”