Swift surged past team-mate Ian Stannard to inherit the national champion’s jersey from his cousin, Connor, while Barnes became the first woman since Emma Pooley in 2010 to win the national road race and time trial in the same year.

The 190km men’s race was punctuated by frequent attacks from the relentless Stannard, who took over from the trio of Dan Bigham (Ribble Pro Cycling), Chris Lawless (Team Ineos) and Michael Mottram (Vitus Pro Cycling p/b Brother UK) who animated the early stages of the race until the latter suffered an unfortunate crash.

From then, Stannard was a virtual ever-present at the head of the race, although his lead group of six – made up of John Archibald (Ribble Pro Cycling), Swift, Scott Thwaites (Vitus Pro Cycling p/b Brother UK), Matt Bostock and Alex Richardson (both Canyon DHB p/b Bloor Homes) – was caught by a chasing group which included the likes of Adam Blythe (Lotto Soudal), Alex Dowsett (Katusha – Alpecin) and Ethan Hayter (VC Londres) with little over 20km remaining. That group was eventually thinned out to four, with Stannard continuing to attack in an attempt to claim his second national road race title. Dowsett was the first to fall away, while Stannard’s final attack also looked to have shaken off his remaining contenders, Archibald and Swift.

However, Swift timed his superb counter-attack perfectly, sweeping past his team-mate in the final kilometre, over-taking Stannard as the race entered the closing stages in Norwich city centre and crossing the line comfortably clear to claim the national jersey.

Afterwards Swift, who suffered a ruptured spleen after crashing in training earlier this year, said:

“It feels really good. I’ve been chasing this title for a number of years; I’ve been second, fifth, fourth, near enough all of the places in the top five and top ten, so to eventually get this jersey in the way that we rode today - I’m really happy.

“I’ve come off the back of a really good but difficult season - obviously with the crashes and stuff like that - but I’ve just had a new lease of life this year and really been happy.

“It’s nice to keep it in the family, but I had to show my little cousin (Connor) how it’s done again.”

Stannard claimed silver and Archibald bronze, which represented a second medal of the championships for the Scot, who also claimed silver in Thursday’s time trial.

The women’s race – over 136km – was a more cagey affair, with the peloton staying together for a large period of the race despite aggressive riding early on from the likes of Connie Hayes (Liv Awol), Hayley Simmonds (BTC City Ljubljana) and Emma Cockcroft (Bianchi Dama).

By the time that group was caught the peloton had thinned considerably, and Anna Henderson (Brother UK – Tifosi p/b OnForm) and Lizzie Holden (Drops) took the opportunity to make their own move off the front. They were joined by Barnes and Abby-Mae Parkinson (Drops) at the 100km mark, ensuring that a formidable-looking group now headed the race.

They continued to go away from the peloton and entered Norwich city centre together. However, it was Barnes who had the legs to attack off the front of that group, riding away from second-placed Henderson in the final 200 metres to clinch an impressive double, and join her sister Hannah on the illustrious list of British national road champions.

After the race, she said:

“I knew I was coming into this with quite good form. My time trial kind of shocked me but to get both (titles) – I can’t really believe it yet.

“I rode the last two days and I’ve done a couple of stage races already this year so I think I recover quite well from those. I just fuelled well and went into today thinking ‘just go for it’.

“All the other three girls there are good at sprinting and all really strong, so we worked together really well. I knew exactly where I wanted to go and just dug in to the line.” 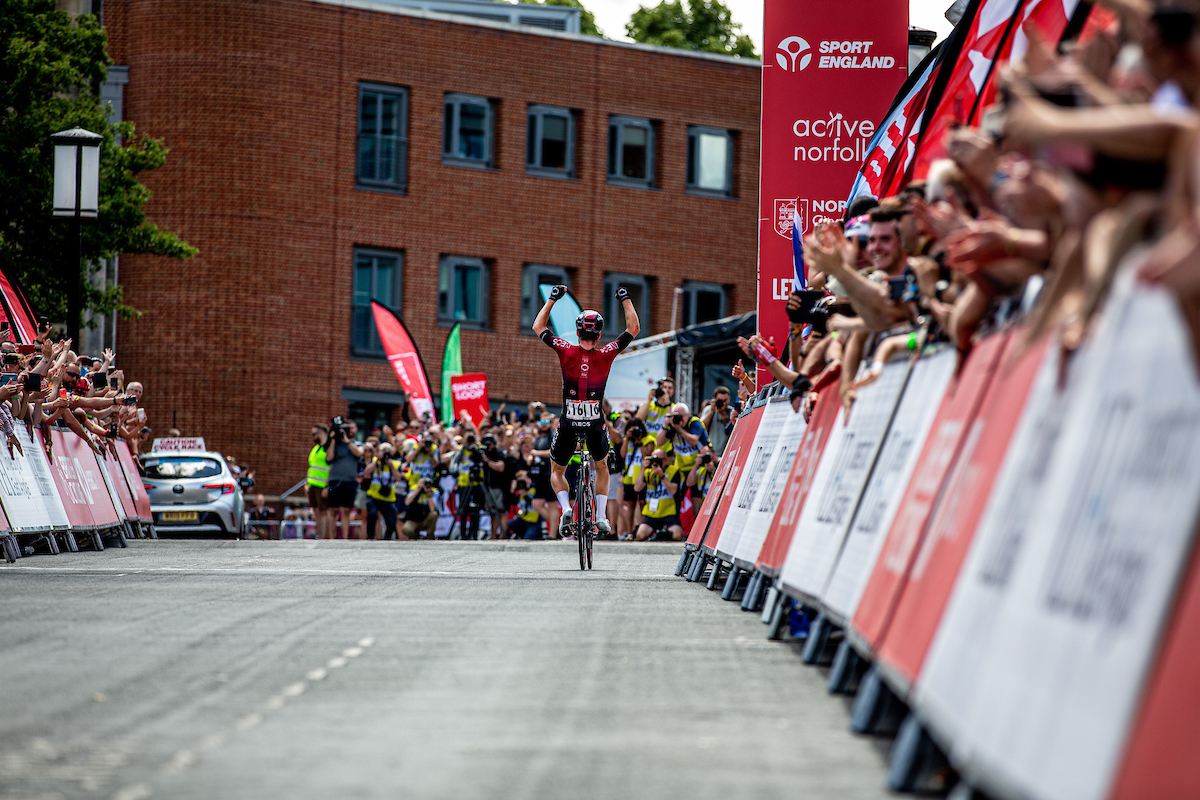 As with last year’s women’s race, two thirds of the elite podium was made up of under-23 riders: Henderson claimed the under-23 title to accompany the equivalent time trial jersey which she won on Thursday, while Holden and Parkinson won silver and bronze respectively in that category.

Today was the final day of the HSBC UK | National Road Championships, which formed part of the wider Great British Cycling Festival. On Thursday, Dowsett and Alice Barnes claimed the elite national time trial titles, while today’s road races were complemented by a number of opportunities for amateur riders to take advantage of the celebration of cycling – this included over 5,500 people taking part in a HSBC UK Let’s Ride event on the closed roads of Norwich city centre.