Alex Dowsett produced a world-class performance to equal Stuart Dangerfield’s record of four British time-trial titles on Thursday at Cadwell Park, head and shoulders above the competition, as earlier Hayley Simmonds and Scott Davies took the women’s and under-23 men’s crowns.

Dowsett set a scorching time of 1:00.11 over the testing 44.8-kilometre course that combined the open roads of Lincolnshire and the swooping tarmac of the Cadwell Park motor racing circuit.

"It's lovely to get it back," said Dowsett. "It's really significant being national champion. Now every time I do a time-trial I get to wear this, it stands me out as either the British or Dutch national champion!", he joked.

"I couldn't have lost it to a more talented guy last year in Brad but it's nice to have it back."

The early fastest time of 1:05.52 from CC Luton’s Ashley Cox stood until Lloyd Chapman carved away nine seconds, with a 1:05:43 from the Richardsons-Trek RT rider.

Chapman was quickly usurped by SportGrub Kuota Cycling Team’s Ryan Perry who lopped a huge chunk of time off the target time with a 1:04.28 effort.

NFTO’s Edmund Bradbury then dropped below the 1:04 mark with a 1:03.42 as title favourites Bottrill and Dowsett ploughed around the three laps of the open road sector of the Lincolnshire course, two of just six riders remaining with a chance of challenging for the medals.

As Dowsett passed Bottrill, his four minute man, it became clear that the 26-year-old Movistar pro was headed for a record-equalling fourth title – it was just a case how big the winning margin would be.

In the end Dowsett’s win was emphatic, a time of 1:00.11, ensuring that the British title was added to his remarkable year of hour record and Bayern Rundfahrt stage race triumphs.

"That was tough. I didn't have a radio so I had no idea where I was in relation to anyone else," commented Dowsett after his effort. "The course itself - in training I thought it would be easier in the race but it was actually harder, so I had no idea how well I was going out there. But when I saw Mat (Bottrill) I knew that either he was on a horrendous day or I was on a good one."

Despite what was in the end a comfortable victory, Dowsett confessed that he was far from comfortable out on the course. "I had a bit of a moment on the second to last corner around here," he said. "I've got quite a few friends who race British Superbike and I'm not going to hear the end of it from missing that apex!"

"On lap one I got stung by a wasp just inside my thigh, which kind of added insult to injury. Something always happens at nationals for me. I think I've had a crash, a bike change, being sick as a dog and this year a wasp sting so - yeah - a thrill a minute!" 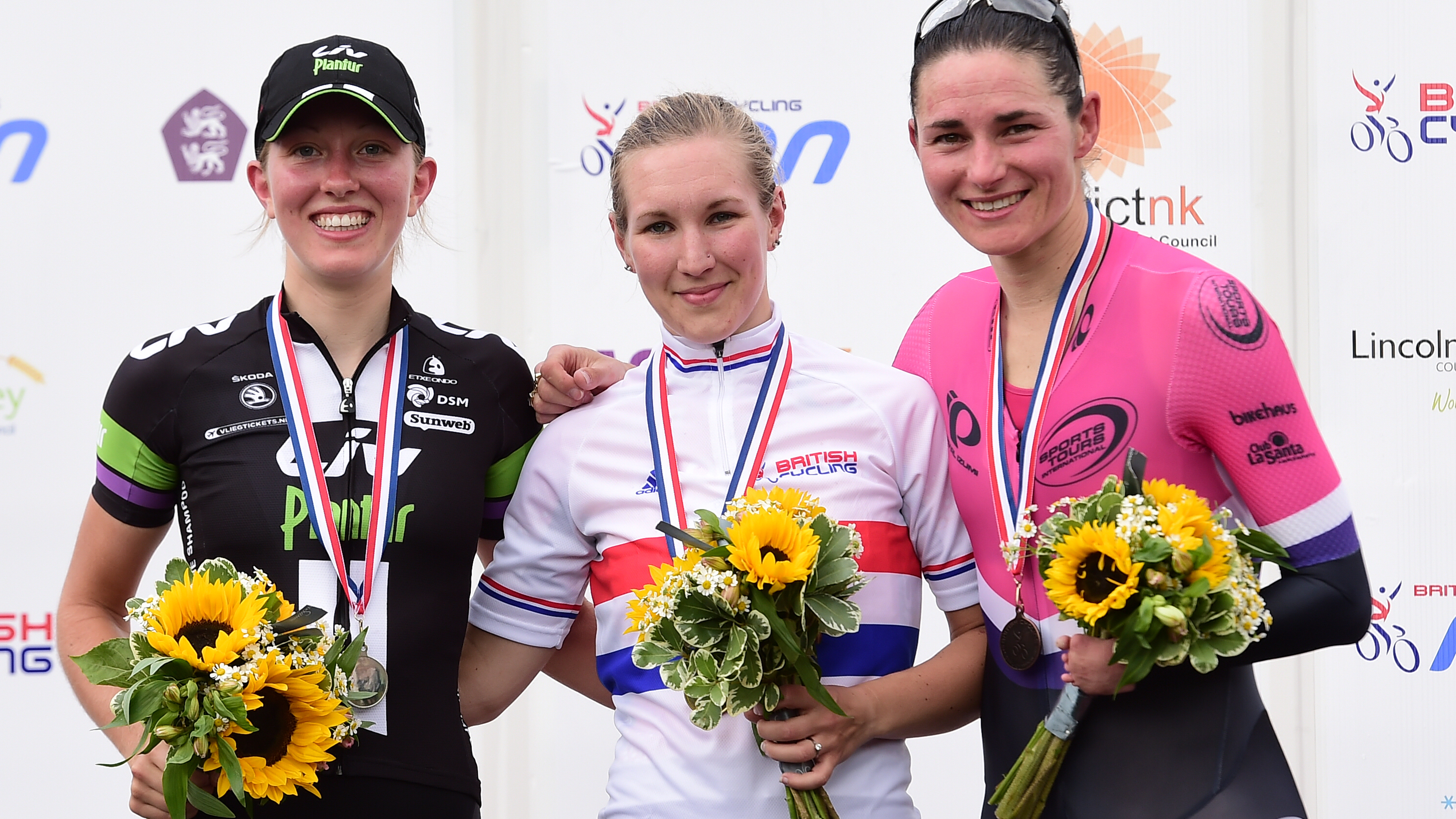 Simmonds, who moved from rowing in 2009, took the lead from early pacesetter Ciara Horne over the 33.6-kilometre course and no one could come close.

Horne, touted by Katie Archibald and Elinor Barker as a potential winner, posted the first serious time, 53:38.31 the time for the 25-year-old from Warwickshire.

Despite her billing, The Pearl Izumi Sports Tours International rider started early on in proceedings, resulting in a long spell in the Cadwell Park hot seat as rider after rider tried and failed to dethrone her; early rivals unable to get within minutes, let alone seconds, of the Great Britain Cycling Team pursuiter.

But time-trial specialist Hayley Simmonds of Team Velosport pulled off a massive coup, the 2014 10-mile and 50-mile time-trial champion posting 51:39.89, throwing the gauntlet down in resounding fashion with Katie Archibald and Dame Sarah Storey still out on course.

Liv Plantur's Molly Weaver soon pushed Horne into third with a 52.58.18 time and within minutes, pundits’ favourite Horne was dropping out of medal contention.

Dame Sarah Storey couldn’t challenge the time of Simmonds, the multiple Paralympic champion stopping the clock at 53.00.61 and dropping into third with just a few challengers left out on course.

Storey’s teammate Katie Archibald, who took silver in 2014, was the last challenger to finish but could only manage sixth, handing the women's crown to a delighted Simmonds.

"It's completely overwhelming - I've worked really hard for this," said Simmonds. "I hoped it was going to be really close and I just went out and did the ride that I thought I could, did the effort I thought I could and obviously it paid off.

"I was just trying to focus on getting out the ride that I was capable of and not necessarily concentrating on the other big names that were starting after me."

"After I finished and I was half collapsing over my bike I could just hear the commentator say my time and then say 'will anyone go under 50 minutes'. Dame Sarah and Katie Archibald are both capable of going under 50 and at that point I wasn't even sure that I was in the lead, let alone that I was going to win by a minute."

The win has vindicated the massive amount of work that Simmonds has put in to convert her body from the demands of rowing to those of cycling:

"It's really paid off - it's been a really hard road but it's paid off." 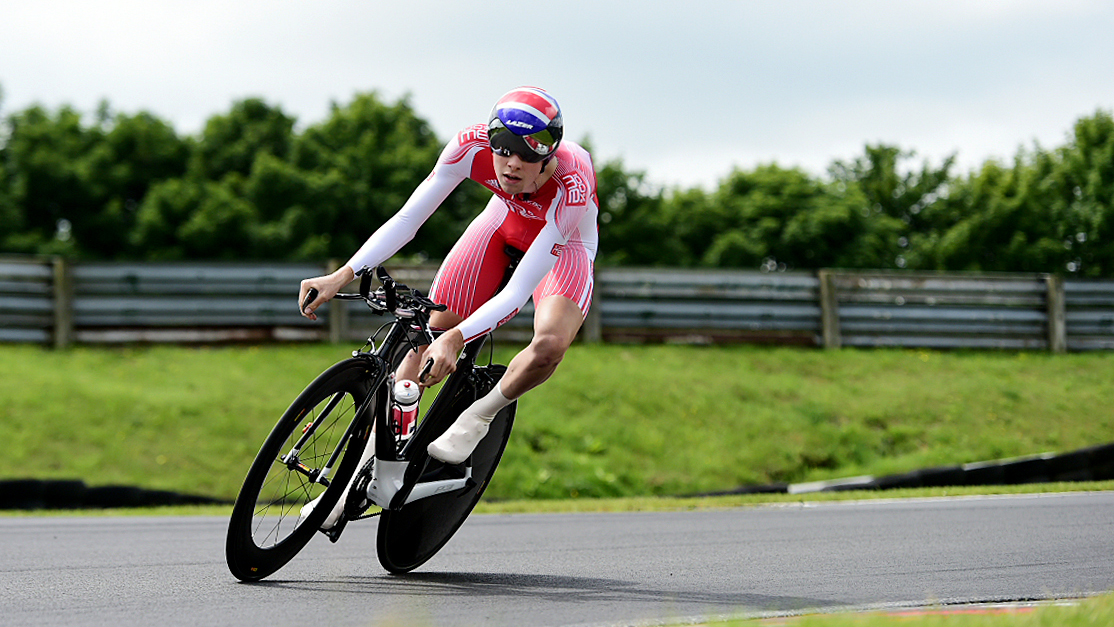 The day began with the under-23 men's title event, when 100%ME’s Scott Davies successfully defended his British under-23 time trial title.

The 19-year-old from Carmarthen fought off a strong challenge from fellow Welshman, Team Wiggins’ Owain Doull, recording a time of 47:20.32 to retain the jersey he won in Monmouthshire 12 months ago.

The under-23 men’s competition saw riders face an undulating 33.6-kilometre course starting and finishing in Lincolnshire’s Cadwell Park motor racing circuit, providing a unique location for the annual test against the clock.

Charlie Tanfield was the first rider to set a benchmark, the Easton Ritte rider stopping the clock at 49:37.80 for the 33.6-kilometre effort before Chris Fennell of Catford CC Equipe/Banks lopped half a minute off Tanfield’s time, recording a time of 49:07.13.

But it was 100%ME’s Gabriel Cullaigh who produced the first sub-49-minute time, scorching around the Lincolnshire course to record a time of 48.40.72. Cullaigh’s 100%ME teammate Mark Stewart soon deposed his teammate, taking the hot seat in a time of 48.37.24, shaving another three seconds off the mark.

One Pro Cycling’s Tom Bayliss then showed that a sub-48-minute effort was on the cards, rocketing around the course to record a 48:04.42 effort. James Shaw and Josh Teasdale both produced strong rides but couldn’t topple Bayliss, Teasdale slotting into second ahead of Shaw as the competition approached the sharp end.

With just a handful of contenders remaining Axeon Cycling Team’s Tao Geoghegan Hart was first to break into the 47-minute times with 47:37.90, only for Team Wiggins’ Owain Doull to immediately strike back with a stunning 47:26.53.

But Davies, continuing the stellar form demonstrated earlier in the year at Tour de Yorkshire, did not falter, besting Doull’s time by six seconds with a 47:20.32 masterclass, joining Alex Dowsett and Sam Harrison as only the third rider to win back-to-back under-23 time trial titles.

"It was pretty tough - I think the nature of the course meant holding a rhythm wasn't that easy today," said Davies following his effort.

"It's quite rolling so there's no real stretch where you can hold the same pace. It's up, down and up. That steep hill is quite tough as well - quite a testing course.

"Relieved is the word that I'd use to describe how today went. I came up to it with a bit more pressure than last year - relieved to have defended it."

Cycling in the heat

With much of the country currently experiencing a period of hot weather, and with a Met Office extreme heat warning in place in some areas from Sunday, we’ve pulled together the following advice for riders, event organisers and parents to ensure that we can keep everybody cool, hydrated and safe during this period.

Cat Ferguson and Elliot Rowe claimed Youth A national champion jerseys in the National Youth Circuit Championships at the Scarborough Festival of Cycling, while Leon Atkins and Mabli Phillips were crowned the Youth B national victors.

Cat Ferguson and Sebastian Grindley claimed Youth A victories in Round 6 of the National Youth Circuit Series at London 2-day, while Melanie Rowe and Leon Atkins were crowned winners in the Youth B races.