Olympic champion Archibald and Lloyd fought back from an early crash to win three successive sprints to set up a thrilling finale.

Needing to win the final sprint to take the victory, Scot Archibald dug deep to hold off leaders France and leapfrog them to send the home fans into a frenzy and triumph in the first world-level women’s Madison.

Archibald and Lloyd had to come from a long way back after the early crash. Archibald was quick to get back on her bike, with Lloyd taking slightly longer to regain her composure before re-joining the race.

Knowing they had it all to do, Olympic gold medallist, Archibald was a class apart, winning three consecutive sprints to put them into second place behind the French pairing.

Madison was "fast and furious".

Lloyd contested the penultimate sprint and couldn’t score points but did a huge turn on the front before bringing her teammate back into the race, with Archibald just pipping France’s Laurie Berthon, take the double points on offer for the final sprint and claim the win.

“It was fast, it was the biggest ask for us trying to get that lap," said Archibald.

"But we managed to bring it round and be competitive in the sprints. So yeah a pretty fast and furious race."

Archibald added that the 'Glasgow roar' made all the difference to her in the final stages of the race.

"I’d been there so many times with the French rider, I think it was Laurie Berthon, who I could just see out the corner of my eye, hearing it made me go all out to have that lunge; It helped!"

Lloyd said that, despite the crash in the opening stages of the race involving both British riders, they would not let that put them off their ride.

“I think we’re ok, the crowd got behind us and got us back on our bikes.

"We knew we had a good chance so we wanted to get back up and see what we could do."

Earlier in the evening Mark Stewart was agonisingly close to securing a bronze medal, missing out by a single point to Team USN’s Sam Harrison who made a late charge.

Stewart had taken an early lap with eventual race winner Cameron Meyer, early on but just ran out of steam at the end of the race. He will compete again in the Madison tomorrow.

GB's Mark Stewart left it all out there in the points race and came so, so close to a medal.#TissotUCITrackWC pic.twitter.com/XxWzYcoZJL

Following the race he paid tribute to the home support.

“I’ve got the Madison tomorrow so I’ll get back tomorrow and – I’d say more of the same but I’m hoping for a wee bit better!”

Crash. Get up. Win the first world-level women's Madison at the death.

In the day’s first session Emily Nelson rode for bronze in the women’s individual pursuit but lost out to Belarussian rider Tatsiana Sharakova.

Joe Truman looked in good form in the men’s keirin but couldn’t get his tactics quite right and went out in the first round repechage, though the crowd still had plenty to cheer as Team USN’s Lewis Oliva battled his way through the rounds to take a well-deserved bronze medal. 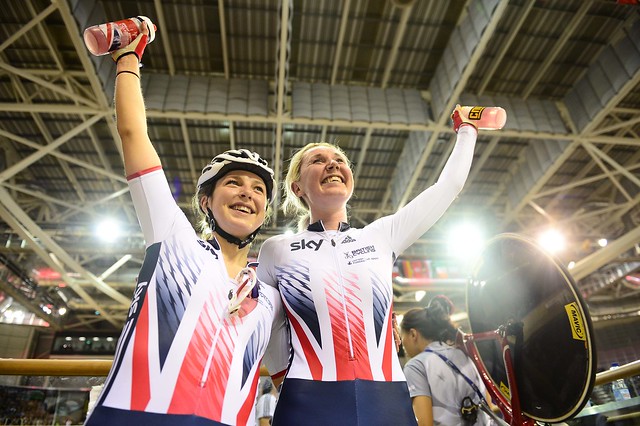 Kian Emadi also competed in the scratch race but was forced to retire after being lapped.

“My legs felt alright today but I made some mental errors out there on the track,” he said.

“I rode some scratch races when I was younger but it’s a lot different at this level – there’s more cat and mouse and, bluffing and using the least amount of energy.

“I’m really pleased with how this meet has gone, I hope we can build on that and refine things and be in a really good place.”