Records fell and medals came closely behind for ParalympicsGB on the final day of track cycling in Rio.

More gold followed for Great Britain’s tandem pairing of Lora Turnham and pilot Corrine Hall as they out-paced their opponents from New Zealand to win the women’s B individual pursuit title.

Sophie Thornhill and pilot Helen Scott performed an incredibly quick catch on their opponents in the women’s B individual pursuit to bag the bronze for Great Britain.

The tandem proved a profitable discipline for the British team as the pairing of Neil Fachie and Pete Mitchell won a silver medal in the men’s B kilo final.

Medals and records in Rio

It was a busy final session in the Paralympic velodrome, with riders competing across all three track disciplines; the team sprint, individual pursuit and the kilo time trial.

The women’s B individual pursuit was the first event on the track and Great Britain had two tandem pairs in the competition; Lora Turnham and pilot Corrine Hall, making their Rio debut, and kilo gold medallists Sophie Thornhill and Helen Scott.

Thornhill and Scott had set the fastest qualifying time in the third heat, executing a smooth catch of their Australian opponents and giving themselves the best chance possible of progressing to the finals.

The world champions, New Zealand’s Amanda Cameron and her pilot Hannah Van Kampen, seemed to be on course to beat the time of the first British pair, but tired towards the end of the race and only managed to set the second fastest time with four pairs left to ride.

Turnham and Hall had a blistering start and held the number one spot throughout their qualifying race, breaking the Paralympic record in doing so.

In the team sprint qualifying round, Great Britain’s trio of Louis Rolfe, Jon-Allan Butterworth and Jody Cundy were the final team to take to the track, after watching the team from China set a very good time.

Rolfe went off like a rocket and at first it seemed Butterworth could not keep with the pace but the British team were soon ahead by the end of the second lap and Cundy finished strongly, setting a new world record in the process.

Para-cycling newcomer James Ball was the first British tandem athlete to take to the track in the men’s B kilo final and set the fastest time so far with his pilot Craig MacLean, with four pairs left to ride.

The German duo of Kai-Christian Kruse and Stefan Nimke went even quicker in their kilo effort and Stephen de Vries and Patrick Bos of the Netherlands posted the second fastest time, pushing Ball and MacLean down into third.

The British duo flew out of the starting gate but could not quite beat the sensational time set by Tristan Bangma and pilot Teun Mulder of the Netherlands and instead sped to silver in a time of 1:00.241.

Something of a medal landslide followed as Thornhill and Scott quickly caught their rivals to bag bronze and Turnham and Hall beat their opponents Foy and Thompson from New Zealand to win the gold in the women’s B individual pursuit.

There was barely time to catch the breath before the team sprint trio were back on the track in the gold-medal final.

Another world record followed and an eighth gold medal for ParalympicsGB in the final event in the cycling track programme.

"For the kilo, I was properly nervous and I didn't really enjoy it that much but for this one, with these guys and the way they've been riding for the last few months, it's just a pleasure to get up there.

"The fact that we broke the world record in the heats, we knew there were a few little things we could tweak and we just got it all right in that last ride.

We just really enjoyed every second of it, picking up these medals in front of this fantastic crowd." 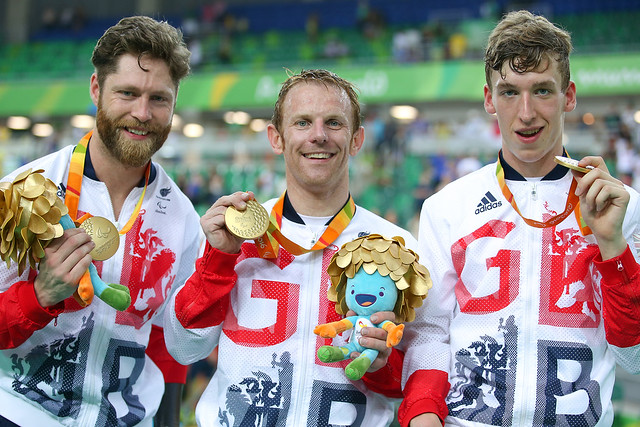