Laura Trott, Katie Archibald, Joanna Rowsell Shand and Elinor Barker smashed the world record to defeat the USA in a time of 4:10.236.

"[Winning a third gold medal] was something I wanted to achieve and to do it alongside these three girls is just incredible," said Trott.

"The feeling we were getting, it was like this machine was coming together. To come away with a time of 4.10 was honestly incredible."

"This means the world to me," said Rowsell Shand, who now has two Olympic gold medals.

"I won gold four years ago but this was a much harder battle.

"It has not all been going our way over the last two years, but we pulled together."

Olympic debutant James then added silver with a superb late surge in the keirin.

James, who has fought back from a career threatening injury, powered down the outside on the final lap as she finshed behind Elis Ligtlee of the Netherlands, who won gold, with Australian Anna Meares in third. 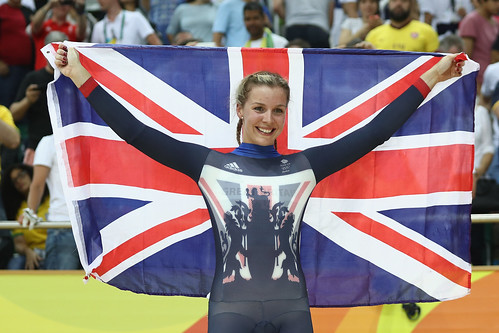 "I came in with good form and I love the keirin and I love racing. Once I got through the first round I just wanted to enjoy the day. I was at the back and was just thinking 'when do I go, when do I go?'

"It was so special, I have 10 of my family here - my mum has never been on a long-haul flight before.

"I have had so much support from British Cycling, it has been a tough two years and I couldn't have done it without everyone's help."

Skinner and Kenny into sprint final

Skinner, who won his first Olympic gold in the team sprint, saw off the challenge of Australian Matthew Glaetzer in his semi-final 2-0.

Defending champion Kenny, though, found himself 1-0 down against Russia’s Denis Dmitriev but produced two fantastic sprints under pressure to make the gold medal final for a third successive Games.