The medals continued to roll in for the Great Britain Cycling Team on day three of the UEC Track Junior and Under-23 European Championships.

Jon Dibben, the current elite points race world champion, showed his class in the final endurance event on the track in Montichiari.

After allowing the race leaders to gain four laps to his two over the rest of the field, Dibben proceeded to execute his comeback, picking up first one and then two laps to draw level with the leaders.

The rainbow stripes-wearer then increased his total to 125 by by dominating in the intermediate sprints and taking a fifth lap with Irish rider Mark Downey.

“I really enjoyed it, it felt good and my legs felt good," said Dibben.

"It wasn’t the plan to start easy and build up; I thought I’d be marked which I was but straight away I could tell that a lot of laps were going to be taken.

“It’s a big event, another jersey, so I’m happy to come here and win it.”

Emily Nelson showed her strength in the under-23 women’s points race as she finished in the silver medal position after a fast and furious ride.

Already a European champion in the under-23 team pursuit, Nelson collected points throughout the race, before gaining a lap on the rest of the field and taking the top points from the final sprint.

Nelson was only beaten by Belgium’s Lotte Kopecky, who managed to gain two laps during the course of the race and finished with 48 points.

“It was really hard but I found my legs a little bit more later on," said Nelson.

"I managed to get a lap with six laps to go and won the sprint at the end so I managed to pull it out of the bag.

"At one point I didn’t think I was going to get anything so I’m really happy to come away with silver.”

Joseph Truman won a bronze medal in the under-23 1km time trial with a new personal best time of 1.01.742. The sprinter added the bronze to the gold medal he won earlier in the week in the team sprint event.

“I was buzzing from that time,” said Truman.

“I couldn’t do anything about the finishing result, but I wasn’t expecting to go that quick and do a two-second PB. It was a good ride”

Finished 3rd in the end, buzzing off that with a PB of over 2 seconds!

The British rider finished in bronze medal position, after Paternoster of Italy and Raaijmakers of the Netherlands took a lap on the rest of the field to clinch gold and silver respectively.

“I’m pretty happy; it’s always good to get on the podium,” said Raybould.

“The Italian was so strong so I was just happy to be in the same ball park!”

Jake Stewart finished in eighth position in the junior men’s points race, which was won by Czubak of Poland. 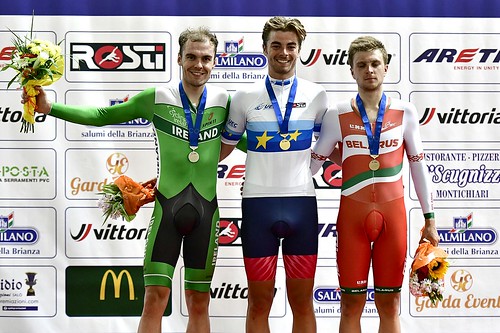 Ethan Hayter got off to a good start in the junior men’s omnium, clocking the fastest time in the individual pursuit and finishing sixth in the scratch race.

After the elimination race, Hayter finished the day in second place with 106 behind Krawczyk of Poland, on 118, with Ottevanger of the Netherlands in third on 94 points.

Alex Joliffe qualified for the semi-finals of the junior men’s sprint, beating Vasileios Dimitropoulos of Greece in the quarter-finals.

Follow our #RiderRoute blog from three of our junior riders here.