After qualifying fastest on Friday, Matt Crampton was swapped out of the men’s team sprint to concentrate on keirin duties with Callum Skinner replacing him in man three and the trio went on to produce a 43.751-second ride to defeat Poland’s Maciej Bielecki, Mateusz Lipa and Kami Kuczynski.

"Really happy with that," said Kenny. "Getting a couple of second rides in and having the confidence to change team and still perform with a different line-up."

"I think we've clinched the world cup leaders' jersey so it's a really good sign of consistency through the season," said Skinner.

Man one Hindes added: "It seems like every world cup we're doing we're getting better so it's a good sign for Rio." 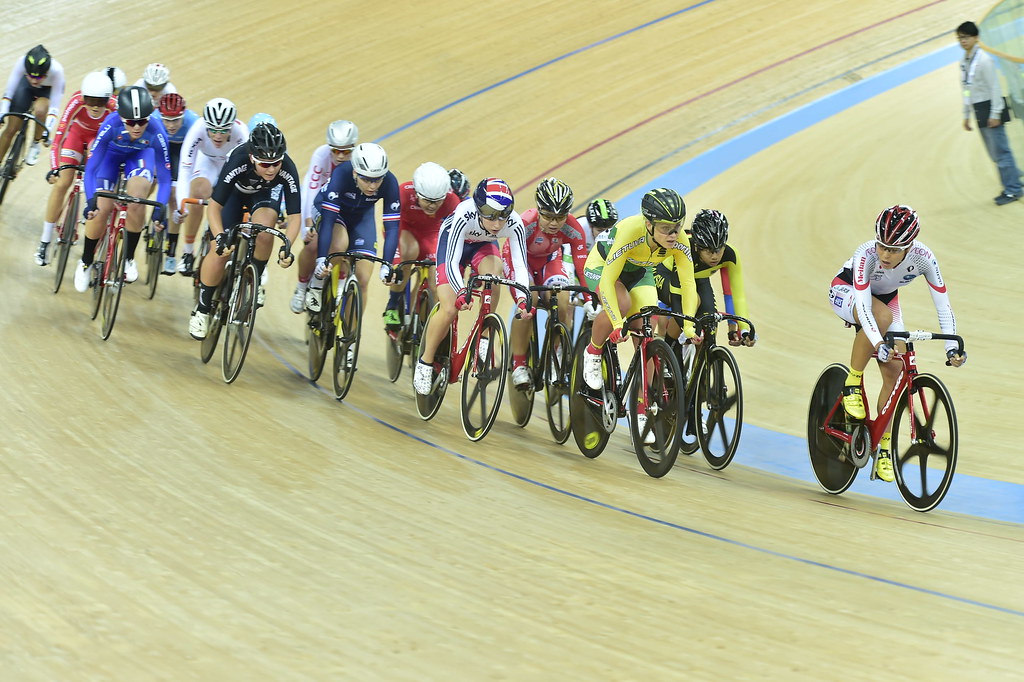 The men’s medal came after Great Britain’s women took silver in the team pursuit. After qualifying fastest on Friday, Laura Trott, Joanna Rowsell Shand, Elinor Barker and Ciara Horne produced a 4:18 to defeat China’s team pursuiters in the first round and book a place in the final against Canada.

Following her points race bronze a day earlier, 19-year-old Emily Nelson was swapped in for Laura Trott but after a kilometre the British team were three-quarters of a second down, the gap going out to half a second at the halfway point. Britain narrowed the margin as the contest concluded, stopping the clock on 4:20.034, around a quarter of a second shy of Canada’s winning time.

The result meant third overall for Great Britain in the team pursuit world cup rankings with 674 points, behind winners Canada (870pts) and the USA (736pts).

"It was a good battle out there,” said Rowsell Shand. “We've had two really good rides in the first two rounds. We've tried different line-ups and Emily's really stepped up well today.

"It's a massive change in pace for Emily and big step up for her.

"A really good battle out there and we've really enjoyed the weekend."

Good ride in the final! We managed to get the win and to become overall World Cup winners! #Rio2016 #hongkong pic.twitter.com/zggBg1OJLT

Earlier Jess Varnish and Katy Marchant took a superb silver medal in the team sprint. After qualifying second on Friday the British duo lined up against Rusvelo’s Daria Schmeleva and Anastasiia Voinova.

But Voivona’s sub-19-second opening lap, the only one of the competition, was too much to overcome and a 33.625 second time for 500-metres secured Great Britain’s first medal of the day, leaving the team eighth in the overall team sprint world cup rankings.

“It's a big step in the right direction. We're not going to read into times too much here because they're completely irrelevant.

“We're really still up against it for Olympic qualification so to come here and put places between us and the other European countries is really been a step in the right direction.

“We're fully committed to being there in Rio.”

Great Britain’s male team pursuiters took bronze in a superb comeback after misfortune in Friday’s qualifying ride, which saw Kian Emadi puncture and crash. With Germain Burton replacing Mark Cavendish alongside Emadi, Ollie Wood and Chris Latham, the squad put in an impressive 3:59.839 first round effort to elevate them to the bronze medal final against Germany, which they won by almost a second.

Solid riding from the lads for the Bronze here in HK in the TP. Always a pleasure! @kianemadi @MarkCavendish @olliewood95 @ChrisLatham9

"Obviously we're quite a young team here," said Germain Burton. "With a little mishap in qualifying - despite that we still knew that we could do a good ride and be in contention for a medal. We knew the strength was there."

"It's been good to have (Cavendish) back in the team," added Chris Latham. "It's been getting better and better in training. I suppose its weird, him asking us for tips and things like that - he's fitted well - straight into it after a long time out of it."

Great result! Credit to @matcrampton for qualifying us for the final. https://t.co/svUWclfIeq

It was a busy day for Katy Marchant, who faced the dual duty in the individual and team sprint. Marchant began her individual sprint with eighth in qualifying, going on to beat Liubov Basova of Ukraine in the 1/16 finals to set up a 1/8 final draw against Shuang Guo of China.

But the triple 2012 Olympic medallist beat Marchant by one thousandth of a second, forcing the Briton into the repechage, Marchant taking the win and progressing to the quarter finals.

However Marchant had met her match in Australia’s Stephanie Morton, narrowly losing to the Australian in two matches, eventually securing sixth in the minor final.

Becky James exited in the 1/16 final stage, beaten by Natasha Hansen of New Zealand after placing 18th in qualifying.

It was bad luck for Matt Crampton in the keirin, fifth in his first round heat with just the first two progressing. Second place in the repechage meant game over for the British keirin champion.

Mark Cavendish began his omnium challenge with second place in the scratch race, best of the rest after Artyom Zakharov of Kazakhstan gained a lap. A 16th place in the individual pursuit lost the Manxman valuable places but the 30-year-old came back in the elimination race to finish second behind Thomas Boudat of France.

Fifth in the scratch race began Laura Trott’s omnium campaign, the Olympic champion avoiding a last lap crash. An excellent second in the pursuit behind Sarah Hammer was followed by a win in Trott’s tour-de-force, the elimination, to leave her in a strong position at the halfway stage.

Action concludes on Sunday at the Hong Kong Velodrome with the climax of the omnium, the men’s sprint, featuring Jason Kenny and Callum Skinner and the women’s keirin, which will see Katy Marchant’s packed programme continue.