Mark Stewart won his first ever senior international gold medal with a gutsy and tactical ride in the scratch race on day two of the UCI Track Cycling World Cup in Cambridge, New Zealand.

The 20-year-old Scottish rider added to his bronze won in the team pursuit in Cali in last season’s world cup with a brilliant performance at the Avantidrome.

After Colombian rider Brayan Stiven Sanchez Vergara took a lap and the lead late on in the race, Stewart bravely decided to follow – a decision that paid off as he took gold on the line.

Stewart admitted he came into the race without a gameplan - his aim was just to enjoy it.

"It's lovely, you go in, no pressure, you just think, right, I'm going to do what I love doing and just ride a bike and race it, I love it.

It’s the Great Britain Cycling Team’s first medal of the weekend and comes after a day where the squad’s sprinters took another step forward on the road to Rio with some strong performances.

Jason Kenny finished fifth in the keirin after a consistent day of riding, having also taken fourth in the team sprint alongside Philip Hindes and Callum Skinner.

4th today in the teamsprint against Australia out here in New Zealand! Some decent qualifying points for Rio. Next up a visit to Hobbiton

Katy Marchant fought back through the repechages to make the sprint semi-finals before finishing sixth after a number of gutsy rides.

The former heptathlete had to overcome returning teammate Becky James in the first round.

It was the first time the two-time world champion had returned to the world stage in almost two years following a knee injury. Although she didn’t make it past the first round, speaking to BBC Sport’s Hanne Davis, James said it has been an encouraging weekend.

“It's been really nice just to be back racing again and being in this environment because I was a little bit nervous and didn't really know what to expect but I'm happy to where I've got at this level in such a short time.

"It's a good step forward and I'm a long way off but I'm hoping I'm going to keep progressing and I've got a lot more work to do so hopefully in the next few months I'll be back to my best.”

There were more signs of a bright future, and indeed present, for the endurance squads, as Great Britain’s academy riders backed up their great start on day one with yet more encouraging performances.

Chris Latham is leading the omnium after three events, having finished sixth in the scratch race and second in the individual pursuit in a time of 4:22.057. He followed that up with a third place finish in the elimnation to be the man to beat on Sunday, with 104 points - a four point lead.

Emily Kay, on world cup debut, sits in 16th place overnight. After a difficult start in the scratch race, she recovered well to place 13th in the individual pursuit in 3:41.637 and battled bravely to finish seventh in the elimination race. 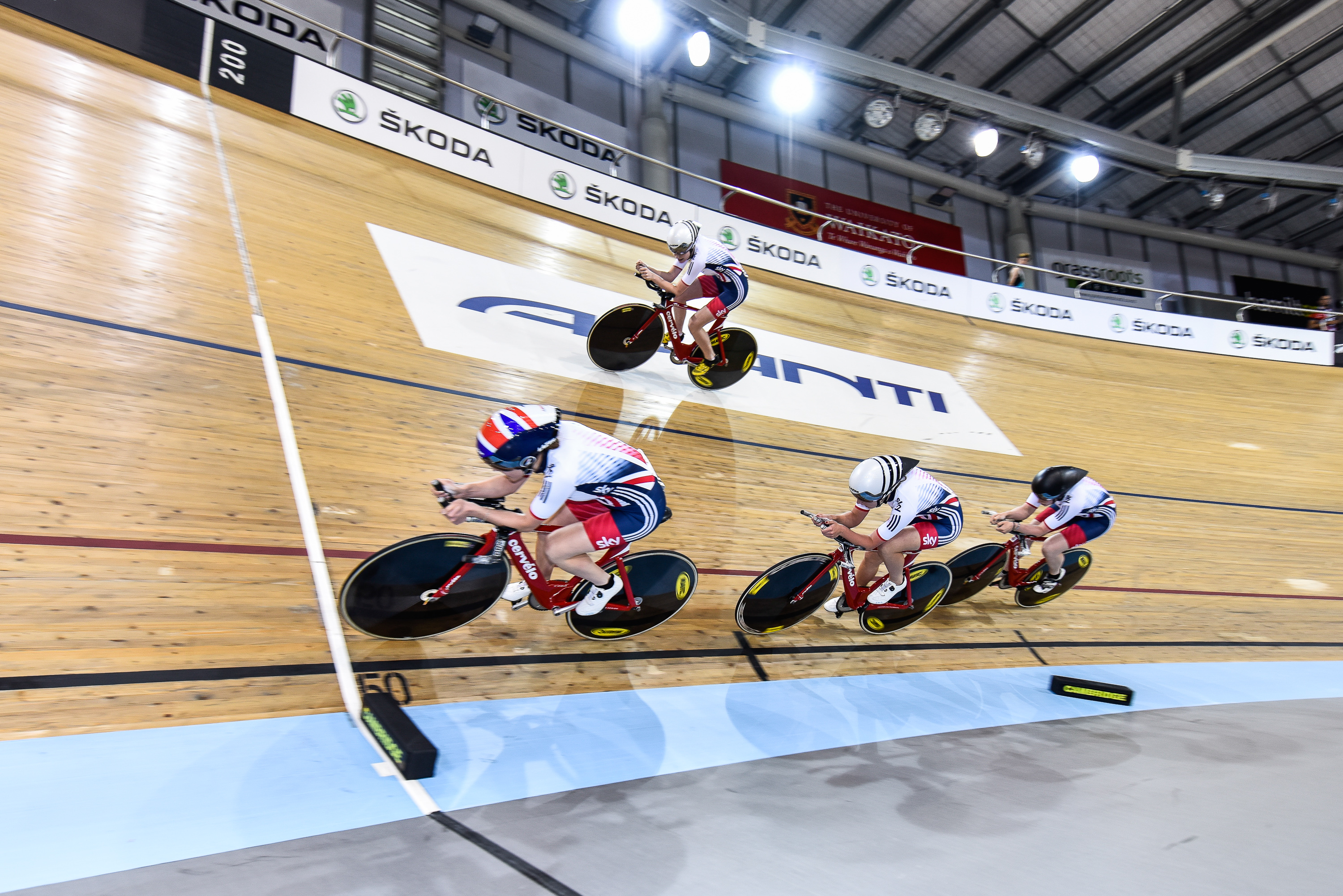 With omnium duties taking priority, Latham and Kay were replaced in the team pursuit line-ups by Joe Holt and Megan Barker respectively.

The men’s team, including gold medallist Stewart, produced a time of 4:02.169 in round one to book a ride-off against France for fifth place. They improved on their time again, finishing in 4:02.127 to cap off an impressive weekend for the pursuit squad.

The women produced two more consistent rides as they took eighth place overall. Manon Lloyd said it had been a great weekend for the team so far.

“We were racing against all the country's best teams and we're Great Britain's second best team so to qualify and be up there in the top eight I think is really good for us.”