Great Britain Cycling Team battled to bronze in the women’s team pursuit with only three riders after an extraordinary effort at the UCI Track Cycling World Cup in Cali.

Joanna Rowsell Shand, Katie Archibald and Ciara Horne defeated the Chinese quartet by less than two-tenths of a second in 4:26.662 to win Britain’s only medal of the opening day after Elinor Barker felt unwell and could not complete the race.

Barker had to take to the line in order to fulfil UCI rules but pulled off the track once the quartet had started the 16 laps of the Alicides Nieto Patino velodrome.

“She has been feeling a bit unwell,” said Rowsell. “But the regulations say that although you can finish with three you can’t start with three so I think she was a real hero to be getting up on the line so we can start the bike race.

“Racing with three was quite a battle but we enjoyed it and got it, just, thanks to Elinor for putting us up on the line when she wasn’t feeling up for it.”

Tough day in the office!Illness meant @elinorbarker was unable to race the final so we went old school & raced as a 3!Delighted with bronze!

Horne added: “It was a really good team effort throughout the day, we had Laura (Trott) in for the qualifier as well and we have really, really battled in that final and we are delighted with the bronze.”

Trott, Horne, Barker and Rowsell had qualified second fastest behind Canada in 4:21.736 before Archibald replaced Trott, who will ride the omnium on Saturday and Sunday, for round one.

There they lost to the USA but the time of 4:23.661 was enough to secure a spot in the bronze-medal ride. 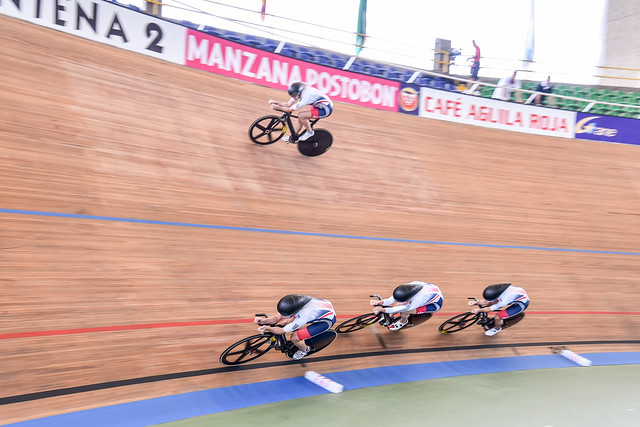 The quartet had qualified in fourth in 4:01.507 but lost out to eventual gold medal winners Russia in the first round - as Jon Dibben replaced Burke - despite improving on their time with a 4:00.629.

Burke returned for the third and last ride as Switzerland won silver and Australia bronze.

Philip Hindes, Jason Kenny and Lewis Oliva were denied a ride for a medal in the men’s team sprint with the fifth fastest effort in qualifying in 44.311 seconds.

Three-time Olympic champion Kenny delivered the fastest second lap in the field in 12.806 seconds but the trio missed out on the finals by nearly half-a-second.

In the women’s team sprint, Victoria Williamson and Katy Marchant were ninth in 33.746 seconds as Williamson took on the opening lap. China won gold with Team Jayco-AIS second and Rusevelo third.

Saturday sees the start of the men’s and women’s omniums as well as the women’s sprint, men’s keirin, men’s individual pursuit and women’s scratch race.