Laura Trott, Katie Archibald, Joanna Rowsell Shand and Elinor Barker caught Russia within 2500m after an explosive start to win the women’s final at the Velodrome Swisse, going on to set a time of 4:17.010.

"That was classic team pursuiting there against a nation that has pushed us in every round,” said Wiggins.

“Until the end there, the last few laps, it wasn't in the bag and we had to fight and that is the spectacle of the team pursuit. I just love it.”

Both men’s and women’s teams had qualified fastest on Wednesday.

Thursday morning saw Barker, Archibald, Rowsell Shand and Ciara Horne defeat the Polish quartet in the first round while Wiggins, Steven Burke, Matt Gibson and Doull saw off Russia in their men’s round one heat.

Trott replaced Horne in the women’s final while Tennant and Dibben came in for Burke and Gibson in the men’s race. 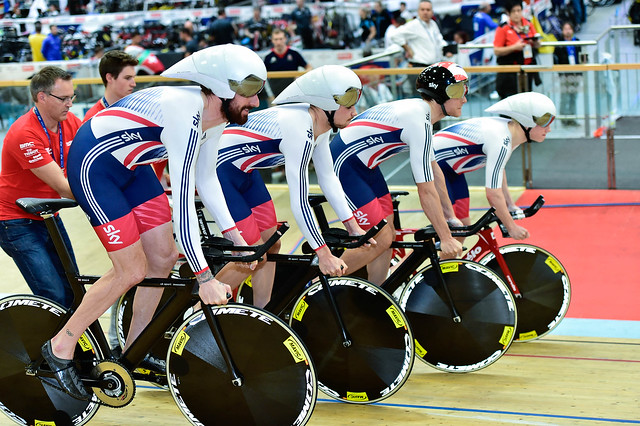 On a stunning win in the women’s race, Archibald said: “It’s so rare – we’ve never had a catch where we’ve continued on riding. Paul had said to us beforehand that he wants us to do three full rides and we all kinda went, ‘Really?’”

In the team sprint events, Great Britain’s men’s and women’s squads missed out on the medal rides, both fifth in their respective qualifying.

British champions Jess Varnish and Katy Marchant paired up again after their success at the British Cycling National Track Championships.

Olympic champions Philip Hindes and Jason Kenny were joined by Lewis Oliva in the men’s event but 44.024 seconds was 0.09 seconds shy of France in fourth-place.