The 26-year-old outsprinted Dutch rider Anna van der Breggen to end her wait for an illustrious rainbow jersey on the road.

“This is the big one,” Armitstead said.

So many people to thank for supporting me to this moment. My dream has come true. I am the World Championpic.twitter.com/4yKlnsRqVb

“You get to wear the jersey and the rainbows are a very special thing in cycling.

British Cycling president Bob Howden said: "This is a landmark moment in the history of British Cycling. Lizzie represents the best of our great sport and deserves all of the praise coming her way.

"Her coolness under pressure in that final kilometre is the hallmark of all the great champions of cycling. She was the pride of Yorkshire and Great Britain already - now she's the best in the world.

"I was very proud to have been there to see it in person, and in the company of Jonny Clay, now cycle sport and membership director at British Cycling, who spotted Lizzie's potential when she was still at school in Otley."

It looked as if Armitstead’s wait for a road world title would be extended in Virginia.

Without any teammates left, Armitstead had missed the move and with only 32km left it seemed the breakaway would last the distance. 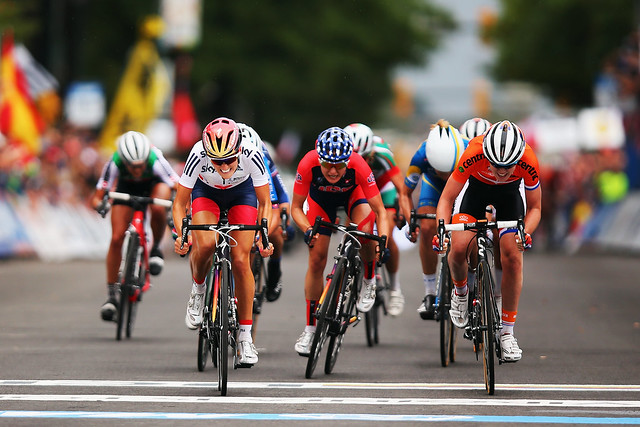 But attacks from Jasinska and then Scandolara and Kitchen saw the good work the leaders had put in to establish their advantage go to waste, and the race was back together for the final two climbs up 23rd Street and Governor Street.

Armitstead attacked on both, but on each occasion was pulled back. It was left to a bunch finish on the false flat and the Briton showed her tactical astuteness to time her sprint to perfection with van der Breggen unable to catch her.

"I knew that the sprint was going to be difficult," she said.