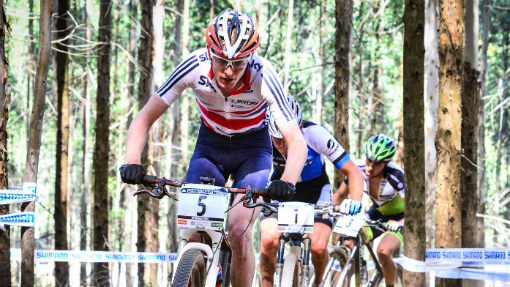 Great Britain’s Grant Ferguson took a superb podium spot with third place in the under-23 men’s cross-country race at the opening round of the UCI Mountain Bike World Cup.

The Scotsman finished in a time of one hour and 24 minutes after five laps at the Cascades mountain bike park in Pietermaritzburg, South Africa, one minute and 22 seconds back from winner Jordan Sarro.

The result is a first podium and career-best for Ferguson at world cup level.

A crash at the start left Kenta Gallagher unconscious and he was removed from the course by medics.

Iain Paton finished an impressive 16th in his first world cup race at under-23 level.

“It’s a long time since we’ve had a podium proper in the world cup. It’s a great ride from him. We’ve come in under raced so we didn’t have too many markers and this race was about laying a marker down.

“We’ve got a lot of training data and I know that Kenta and Grant are in the best shape they’ve ever been in. Kenta got caught in a crash at the start and knocked himself out, he was really unfortunate.”

Starting on the front row for the first time at a world cup, Ferguson took advantage and forced himself into seventh position in the first technical zone in searing temperatures.

By the same zone on lap two, the British champion had moved through into fourth and by the end of the lap, he was third behind under-23 European champion Sarrou and Dutch rider Michiel van der Heijden.

As Sarrou extended his lead to over a minute, Ferguson was left to defend his position on his own for the final two laps with James Reid and Anton Cooper in a chasing group behind.

The Scot held on to finish 38 seconds clear of South African Reid and start his world cup campaign in style.

Eighteen-year-old fellow Scot Paton also delivered an impressive performance as he made his under-23 world cup debut.

"That’s a lifetime best, he carried himself really well and he had to finish within 10% of the winner's time to get one mark towards his selection for the Commonwealth Games so he’s really happy," Dixon said.

"He had a freak crash at the end of lap three on the last descent. He was moving through the field and at one point I thought we were going to get a top 10 finish but that crash cost him. It’s massive experience for him."

With Rio 2016 Olympic qualification starting later in the year, Dixon is positive about the talent in the squad.

"Grant said racing for a podium is very different than racing for a fourth to 10th position, he went to a new place in focus and commitment so Grant will take a lot from that so great signs going into that two-year qualification period."