The 2012 British Under 19 Championship event was held at Exeter in the south and after some thrills and spills along with the occasional surprise, Wednesfield’s Ben Mould came out on top. 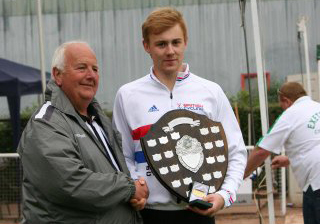 Proceedings didn’t go picture perfect for him however during the first half of the event when he was beaten by favourite Thomas Reed from the inside as he showed the Welsh star the way around his home track. Looking fast Reed came up against his Elite League team mates in heat 9 but it was Aaron Morgan who took the four points ahead of Lewis Roberts after Reed had a tumble with Leyton Glover and couldn’t quite run to the line ahead of the Ipswich competitor.

Mark Carmichael was looking to defend his title but pressure got the better of him when he jumped at the start just before the interval. Clearly unhappy with himself he knew that was a bitter blow to his chances of success this year. After three heats Ashley Hill found himself near the top of the pack but faced Mould in heat 15. Ben Mould made a great gate and Hill was eliminated to the back but he will be happy with his fifth place finish.

As the show came to the last round Mould knew a win would give him the title. The first running of the race saw a bunch up on the first bend and Ben knew he would have it tough to come out of the second bend in the lead from gate four. Not quite making the start ahead of Lewis Roberts Mould was forced back into third but soon crept up the pack with a cut back under Exeter’s Aaron Coles and now the chase for first place began.

Mould closed the long gap between himself and Roberts and fired into the fourth lap with an almighty forceful but legal dive for first place. Roberts came off his bike heavily and all eyes were on referee Mike Legge who, fresh off his honeymoon in Devon, waved to race on and for Roberts to get up. At last Ben Mould has finally succeeded in winning the under 19 title having been the runner on two previous occasions.

The men’s and women’s competitions will take place over the same four event weekends over the course of the season, with both taking place as geographically close together as possible.