On day 1 of the Dudley Grand Prix at the Manor Abbey Stadium in Halesowen, organised by HA&CC’s Geoff Dingley, the third round of the British Cycling Sprinters League was held along with many other support races. The riders were greeted at this well used outdoor velodrome by glorious sunshine with a gentle breeze to keep the high humidity and temperature tolerable.

Sprinters League
The day got under way with the Sprinters Time Trial to establish the fastest 12 times to go through to round 1 of the Sprint. The windy conditions in the back straight kept the Time Trial times down with only three of the top riders achieving sub 12 seconds times.

Round 1
The first round of the Sprinters League was well contested with each of the heats going to form with the strongest riders winning. 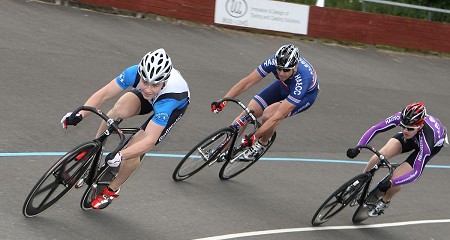 Heat 1: Steve Cronshaw led for the first part of the race but Tom Powell powered his way over the top of the riders to take the win from Cronshaw closely followed by Tom Baker.

Heat 2: There was a slow tactical cat and mouse start to the next heat which only came alive with the sound of the bell. Eoin Mullen took full advantage of the tactics to lead the race but Jim Varnish coolly powered up the finish straight and past Mullen to take the win on the line. 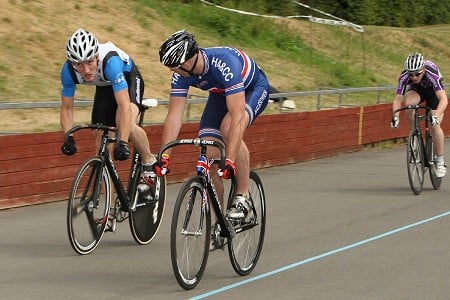 Jim Varnish pins Callum Skinner on the fence whilst Tom Gregory looks on from a  safe distance.

Heat 1
Callum Skinner lead the three riders out for the half first lap before Jim Varnish increased the pace taking the lead with 500m remaining. Into the last lap, Skinner attacked in the back straight to overtake Varnish who was now fading fast whilst Gregory found his strength and pushed Skinner all the way to the finish where Skinner was the stronger and took the win.

Heat 2
John Paul secured his place in the final with a controlled ride which saw him hold back until the last bend where he attacked, outsprinting both Tom Powell and Kian Emadi in the home straight and winning by a clear bikes length.

Minor Final
Jim Varnish (HA&CC) withdrew from the minor final leaving only three riders to contest the minor places. Kian Emadi (Tunstall Wheelers) led out the riders in the first lap, keeping the tempo high whilst he manoeuvred Tom Gregory (HA&CC) and Tom Powell (Newcastle RC 2001) high up on the fence. At the bell Kian Emadi was still ahead as Tom Gregory came over the top of Powell, coming shoulder to shoulder with Emadi as they hit the finishing straight but Emadi was to strong taking the win at the line. 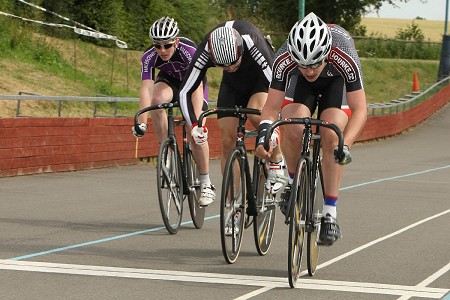 Final
City of Edinburgh RC’s John Paul drew the inside position to lead out the final from his team mate Callum Skinner. A slow walking pace was set for the first lap with no change in position. John Paul kept a eye on his opponent by looking constantly over his shoulder and then at the bell, Paul increased the pace significantly. With 150m to go, Callum Skinner drew level with his team mate and a drag race down the finish straight ensued. John Paul managed to win by half a bike length. The race recorded that fastet 200m of the day with an 11.57.

Afterwards, John Paul explained “I am very happy with win. Its been a brilliant day with such fantastic weather and I am really pleased to be added to the prestigious list of winners on Texaco Cup, some of which come from Edinburgh. With my previous win at Newcastle, I’m sure I’m now leading the series.” 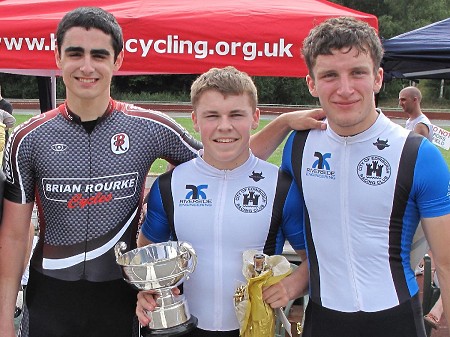 Open Scratch Race
Irish Development (Track) Team’s Tighernach Murphy dominated the Open Scratch race. The alternate race for non qualifing riders of the Sprinters League. The Irish rider’s lone attack after only 8 laps enabled him to not only lap the field but he attacked again to win the race.

Open B Sprint – Non Sprint League riders
With only the first two from each heat going through to the semi final later in the day, the heats of the Open B Sprint were each closely fought with the exception of the last heat where Halesowen A&CC rider Alex Cogswell went for the long sprint. At the bell, he was still way ahead of his nearest rival leading all the way to the finish line to win.

Odd Numbered Riders
The sedate pace of the first lap allowed rider Keiran Yates (Tameside Cyclesport) to take to the front of the field to gain a 50 meter advantage for two full laps. In the back straight Tim Lawson (Science in Sport) came from the back of the field at full speed overtaking the group and leading rider Keiran Yates, Yates slipped onto Lawson’s wheel. As Lawson faded in the finish straight, Keiran Yates zipped past him to take the win. The winner Keiran Yates said after the race “That was a hard win”.

Even Numbered Riders
A much quicker start and pace was set than the previous race with the field staying together until the bell lap, when Julian Pearson (Team Wallis CHH Racing) took to the front gaining a small advantage but this lead was short lived as Robert Lambton (Brooks Cycles) came from the back of the field overtaking in the home straight to take the win.

Semi Final 1
A class ride from Masters champion Geoff Cooke (Sherwood Pines/Co-op Motor Grp) took him to the final in a superbly timed ride. On the last lap, Ted Bate (HA&CC) went for a long sprint gaining a good lead, but the three reamining riders turned on the speed and as Bates legs died, Geoff Cooke over took them all in the finish straight by a good bike and half length.

Semi Final 2
Port Talbot Wheelers rider Keith Williams secured his place in the Open B Sprint final with a full speed race to the line.

Course De Prime
The Irish riders dominated the course de prime, Enda Ryan went on the first lap to gain the first prime of the day, but soon dropped back. Steve Cronshaw then took the lead and the next prime as the race splintered. Tighernack Murphy went for a long lead, taking the next two primes and was joined by Julian Pearson who took the next prime and they worked together over the next four laps, alternating the primes until 3 to go when Pearson tired and Murphy continued to power ahead on his own a good half lap ahead of the main field.

Ian Cooper and Tim Lawson dominated the Vets and Ladies open points race after breaking way after the opening sedate pace. They took the points between them over the next sprints whilst opening a gap of over 50 metres over the rest of the field. Nev Pearson attacked on the last lap trying to bridge to them but was unsupported by other riders.

Senior Points race
Enda Connelly took the first points after taking the lead early on but was soon caught. Jason Streather attacked to take the points on the next sprint resulting in the race fragmenting. Robert Lambton took advantage of the situation and put himself at the head of the race gaining more distance with every lap. T Murphy kept his pace high to try and bridge the gap but couldn’t and eventually dropped back to the main field. Lambton’s lead was now 100m and he kept up the momentum right up to the last lap, only easing up as he crossed the line in first place.

Minor Final
The riders watch each other all the way to the start of the last lap. Neil Withington (VC St Raphael) used the height of the banking to overtake the other riders and won by 10 yards wagging his finger in salute with 80m to go all the way to the finish line.

Final
Helen Scott (HA&CC) lead out in the final staying ahead for the first lap. Keith Williams (Port Talbot Wheelers CC) dived down the track on the last lap to overtake her in the back straight with Scott almost glued to his wheel. Geoff Cooke (Sherwood Pines Cycles) & Alex Cogswell (HA&CC) manage to recatch the two leaders and both challenged Williams & Scott all the way down the home straight but could not power past. 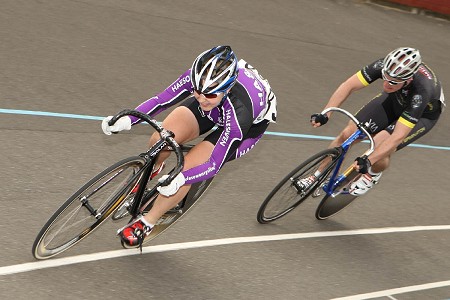 Open Danish – Points Race followed by a Devil
Irish rider Enda Connolly drove the Points race from the start taking the lead early on. He was soon reeled back in by the bunch when the first sprint for points was signalled. After the first sprint, Tim Lawson (SIS) attacked from the front gaining a 1/4 of lap over the bunch but when the bell went for the next sprint, again the bunch reeled the lone race leader back in.

After the sprint Jason Streather (VC St Raphael), Tom Gregory (HA&CC) and Tim Lawson (SIS) pulled away from the bunch however this attack fell apart when no-one wanted to commit to the break. Upon seeing this, Robert Lambton (Brook Cycles) took full advantage and in a lone attack, passed the three riders and managed to pull away with every lap.

Unfortunately Lambton was finally caught with 5 laps to go by Tom Gregory (HA&CC) and Neil Withington (VC St Raphael) who worked together well to gain a healthy lead for the rest of the race where Gregory took the final points. The race was now neutralised for a few laps to allow everyone to come together before the final “Devil take the Hindemost” race eliminating a rider a lap until there were only three riders remaining for the final sprint.  The final sprint was won once again by Tom Gregory from Ian Cooper (Planet X) and third spot to Tim Lawson (SIS).

The day’s Senior racing was complemented by a Youth Omnium. Each of the three age groups rode four races, these being Scratch race, 400 Time Trial, Keirin and a Points Race. Joe Deakin (H A&CC) was the overall winner of the Under 12’s omnium, winning all of the races.  Newport Velo rider Ellie Costa dominated the Under 14’s omnium by winning all her races and posting a respectable Time Trial time of 29.49 for her age group.

Her closest rival was Emily Nelson (Lichfield City CC) who came second in each of the races. The overall winner of the Under 16’s omnium was Jack Cracknell (H A&CC) he won three of his races but only managed third place in the points race, which was won by third place overall Tom Ward (Redditch Road & Path).

Day 2: Click here to read the report and results from Day 2