The fourth round of the British Cycling National Trophy Cyclo-cross series visits the Moorways Stadium in Derby, which hosted the national championships back in January.

A senior men's race packed with quality is all the more intriguing for the return to the British 'Cross scene of former national champion Roger Hammond. He will take on the leading domestic riders, led by Paul Oldham and Jody Crawforth, plus a band of high class Belgians, led by the winners of the last two rounds, Jelle Brackman and Floris De Tier. With the weather once again set fair, we should be in for a cracking day of racing - and with that in mind, here's a look through all the categories and how the various series are shaping up: 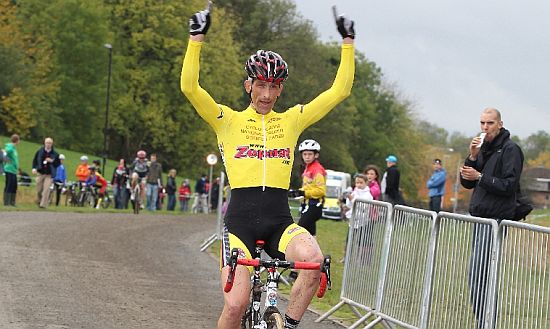 The Veteran-40 series is very interestingly balanced: James Bryan (pictured) won the first three rounds, but Darren Atkins, last season’s series winner came back from a quiet start to the series to win the Southampton round and, with three rounds still to go, he must still fancy his chances of hanging on to his title. Yorkshire duo Noel Clough and Chris Young are also both still in touch after consistent starts to the season.

The Veteran-50 series now hinges on whether anyone can stop Steve Davis. Last year’s series winner missed the opener this time round, but came back with convincing back-to-back wins in Leicester and Southampton. That means he’s only 16 points down on series leader Mick Bell and with Dave McMullen, Ian Wright and Malcolm Cross all stealing points from Bell and each other, Davis has to have a great chance of winning the series if he wins again in Derby.

The Under-16 Male category has become a three-rider contest: Dan Fox (pictured), James Shaw and Jack Ravenscroft have all won a round each. Initially it seemed that Solihull team-mates Fox and Ravenscroft had the measure of Shaw, who they worked over and relegated to third in the two opening races, which they shared. However, Shaw showed he’d learned from the experience with a great win in the third round and with only 8 points separating the trio, it looks like this category will not be decided before the final round.

The Under-16 Female series is a little less open following Grace Garner’s brace of wins in rounds one and two. However, Jessica Wilkinson and Abigail van Twisk beat her in Southampton and although Garner still leads the series by 16 points, she will be looking for a strong result in Derby to settle her nerves or else she might be drawn into a tough dogfight over the last couple of rounds.

The two Under-14 series are, contrastingly, apparently already pretty much sewn up. That may seem a strange observation, given that there’s still half the series to come, but such have been the convincing margins of victory enjoyed by Charlotte Broughton and Daniel Tulett in all three opening rounds that it will take a monumental improvement by their opponents coupled to a dramatic loss of form for either to lose their grip on their respective categories. In the meantime, just marvel at these contrasting but equally precocious talents. 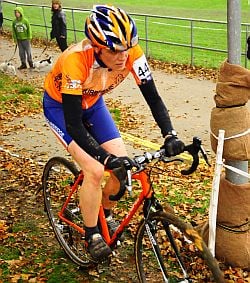 The Women’s Series is developing into a straight battle between Adela Carter and Hannah Payton. They shared the opening rounds, before Lucy Garner beat them both in the third round, where Carter was second and Payton third. Garner isn’t expected to start in Derby, but Stourbridge CC’s Louise Robinson (pictured) is planning to make her first appearance of the season at this level.

Although 46 years old, the three times national champion won the 3-Peaks event back in September and on Sunday rode to an remarkable 10th place in the ultra competitive Yorkshire League veteran and women’s race, beating several top ranked male riders in the process. She and her team-mate, Isla Rowntree, also a three time national champion, both have the class to be in contention. Carter and Payton will be concentrating on their own battle, but the win just elude them both!

The Junior Men’s series is similarly shaping up into a straight head-to-head, with Joe Moses and Alex Welburn only four points apart, having taken a win apiece. They are well clear of the rest. Hugo Robinson, the national champion, makes his second appearance of the series and on the evidence of his win in Southampton will start as favourite. 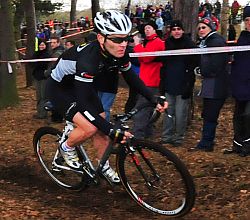 Another series which is looking increasingly like a straight fight between two riders is the Senior men’s. Paul Oldham and Jody Crawforth have been the two leading British riders in all three rounds to date, with Oldham getting the better of his arch-rival each time. That’s given him a useful 11 point lead in the series.

And it will probably fall to this duo to try to claim the first home win of the series, with Belgian visitors having claimed all three races to date. They will have their work cut out, though, with Southampton winner Floris De Tier joined by fellow Belgians Jelle Brackman, Kris Lapere, Kristof Kop and Kenny Geluykens.

Watch out too for another rider familiar with the Belgian ‘Cross scene, eight-times national champion Roger Hammond (pictured) who makes a now rare appearance in the winter discipline he excels at. There’s little to guide us on his form, but you can bet he won’t be turning up to make up the numbers! 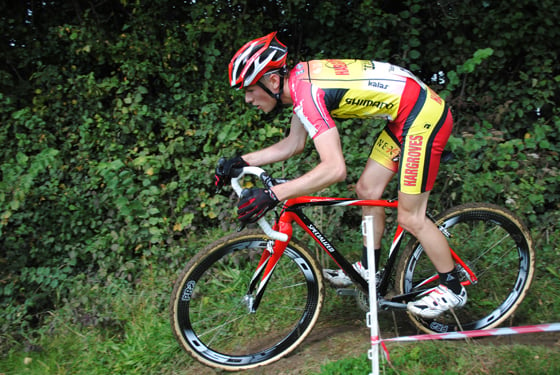 In truth, James has been the rider of the season to date in this age category, but a mechanical robbed him of a hatful of points at Southampton and he’ll be keen to get back onto the front foot.

In a category where form seems to fluctuate more than most, there’s a handful of other riders who could also contend for the win, including Kenta Gallagher, Luke Grivell-Mellor, Lee Westwood and Rob Watson. Their race should make an intriguing sub plot to the seniors’ event.

Britishcycling.org.uk will be at the event reporting back throughout the day, so watch out for updates on twitter (@BCreports) and on this site from late morning onwards.

Spectator entry is free and much of the course can be seen from the sheltered grandstand which makes it spectator friendly whilst fans will be able to get close to their favourite riders on the popular technical sections such as the banks and hurdles. This certainly helped to create a fantastic atmosphere which the riders appreciated at the last race. Car parking is adjacent to the course in the adjoining Rolls-Royce site.

In addition to the National Trophy racing, Cycle Derby are once again putting on a day of activities for cycling youngsters in Osmaston Park (just over the road from Moorways). Young hopefuls will be able to race themselves and then watch their heroes in action on the main course.

As usual its free entry to spectators and they will be able to feast at the excellent Quaver Catering kitchen which provides traditional cyclo-cross refreshments. An event village will be in place for spectators to visit many of the sponsors’ stalls. The event is grateful for the support of Onimpex UK, Optical 3 Sportvision, Total Hire and Sales, Flowfayre and Prestige Partitioning & Storage. This year it also welcomes new sponsors CNP Professional and Forme Bikes.