The Duchy Pirates played host to the South West Club Championships at their track based at The-Track at Portreath. The weather turned blustery and drizzly for the day but that didn't stop the 207 entries having a good day with some excellent racing.

Visiting riders came from as far afield as Norwich and Harworth and they certainly added interest to the races by taking some of the trophies from the SW riders albeit the coveted "SW1" plates went to the first rider from within the Region. 52 Novice riders took part and Novice 6 and Under fell to Jack Nation with Cornwall's Finlay Keogh taking the 7-9s. Burnham's Curtis Pickard took 10-12s with Duchy Pirates' Nicky Stevens securing 13-15s and David James the 16+ group.

The MTB category went the way of Duchy's Sean Herman after defending holder, and The-Track owner, Steve Tonkin crashed out in three of his races. Another Duchy rider, Ben Clarkson, took the Cruiser 15 & Under title whilst Bideford's Brian Jury took the 16-24 group.

Burnham's Clive Hawkins gained himself the spoils in Cruiser 25-39 holding off the attentions of Duchy's Chris Cummin, both riders having won all their motos during the afternoon. Visiting Norwich rider Ady Warden ‘stormtroopered' the Cruiser 40+ group after seeing arch-rival Dave Herman coming together with Ian Wherry and both going down on the first jump in the A final. Ady took the trophy with Exeter's Steve Jenks taking the "SW1" plate. Exeter's Rachel Brooks romped away with the Ladies 20+ category. 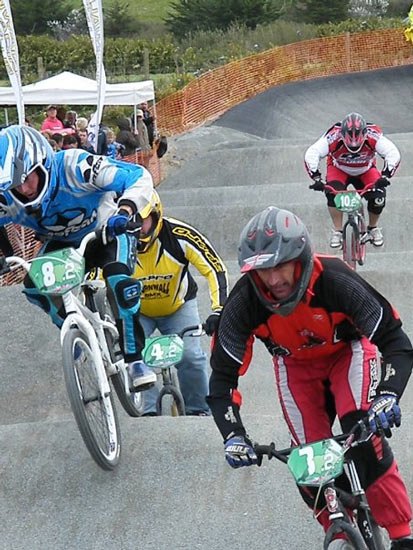 In Expert 6 & Under it was Cornwall's ‘pocket rocket' Ashley England who crossed the line first and in Expert 7 Duchy's Harry Fernihough was triumphant. Visiting from Royston, Daniel Blanche won Expert 9s but it was Cornwall's Daniel Commons-Lomax who took the plate. Another visitor, Ben Turner from Harworth took Expert 10 but Burnham's CJ Tye was awarded the plate. Duchy rider Scott Dominguez took Expert 11 and Cornwall's Tyler Caddy secured Expert 12s.

Another Duchy rider winning the day was Sheldon Johns in Expert 13 and another visitor, Bradley Minns from Harworth upset the Expert 14s by beating Cornwall's Dan Davis. James Clark from Burnham took a clean sweep of wins in Expert 16 and Duchy's Ben Clarkson did likewise in Expert 17+.

Bideford's Michael Smart looked good all day and won all his races beating club mate Sam Hommell in the A Final. Honours in the Female classes went to Cornwall's Megan Wherry in 7-9s, Decoy's Emily Green in 10-12s and Duchy's Georgia Rase in !6+. An interesting meeting,especially the way the visiting riders took to the track, well run by the relatively new Duchy Pirates Club and the track, with it's two recently tarmaced berms, riding well despite the headwind on the first and third straights.