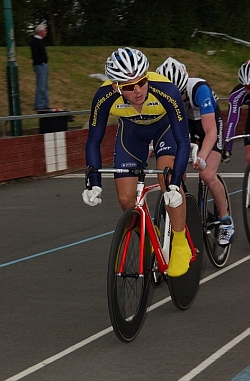 Matt Gittings, who is studying in the United States at Marian University in Indianapolis, was named as Male Personality of the Year in the Reading Sports Awards.

Gittings, who was nominated by Reading Velodrome Racing, was recognised for his achievements in 2011.

Riding for AW Cycles.co.uk, he was a convincing winner of the Reading Track League Senior A's and the Endurance League, despite missing a large part of the season.

Gittings also took the honours at the Reading round of the National Endurance League, the Paris Bordeaux meeting.

He capped off his season in Britain with victory in the Reading Dernyfest meeting, relegating Adam Duggleby to second place after a thrilling tussle.

Gittings was unable to better his silver medal in the 2010 National Derny Championships when rain called a halt to this year's first staging of the championships at Welwyn after he had won the first heat.

But on arrival in the United States on a scholarship to Marian University, Gittings was quickly off the mark as he won triple gold at the National Collegiate Track Championships at the Major Taylor Velodrome in Indianapolis.

He formed part of the winning combinations in the Co-Ed team sprint and men's team pursuit, in the latter event the first freshman to appear in the strong Marian University line-up.

Returning to the United States after the Christmas break, he is concentrating on a road programme ahead of the collegiate and UK season.

"I would like to thank Reading Velodrome Racing for putting me forward for the award," said Gittings. "I believe it shows that cycling is now seen as a major sport both locally and nationally and I will be doing my best in 2012 to live up to the honour."

Mike Mullett, the long-time track announcer and official at the Reading Track League, also received a well-deserved Loyalty Award for his hard work over many years.

The event at the Hilton Hotel in Reading was attended by a number of leading sports stars and personalities, with Ann Packer (now Ann Brightwell), a gold and silver medal winner from the 1964 Tokyo Olympics, among the guests of honour.

With Gittings back in America to resume his studies, his mother Helen received his award from Packer and Sir John Madejski, the Reading Football Club chairman.