Although the statue here at the National Cycling Centre is a lasting tribute to the memory of Reg Harris, there has never been an event in his honour. 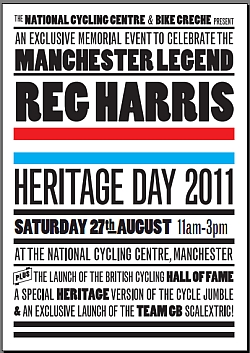 The National Cycling Centre presents the Reg Harris Heritage Day, that will also have the theme of "Fallowfield Remembered". A "My Reg" website has been created for fans to recall their memories of Fallowfield and Reg Harris - visit http://regharris.co.uk/ The content of the website will contribute to a new book on Reg, written by William Fotheringham.

Paul Wilson of Bikecreche is the organiser of the Heritage Day, and manages the Reg Harris website. Admission is £3.00 for adults, children £1.00.

Race the new Scalextric Team GB cycling set. This new kit goes on sale on 1st September and follows the traditional slot racing format, with two miniature cyclists dressed in Team GB outfits. There will also be Hornby London 2012 toys and souvenirs on sale. In the Riders "D" 10:00 am - 3:00pm

Display of Reg's MG TD Sports car that he raced in the 1952 RAC Rally of Great Britain and a display of Reg's motoring trophies. Car on show in the track centre 10:00 am - 3:00pm. The owner, Paul Critchley will do a talk at the vehicle at 2.00pm.

Cycle Art - a gallery of images and sculptures by local and international artists for display and purchase in the track centre 10:00 am - 3:00pm

Meet Evans Cycles staff in advance of the new Evans Cycles store opening at the National Cycling Centre, they have the upper concourse shop with their popular marquee sale, with 30 bikes on sale! 10:00 am - 3:00pm

Opening ceremony at the Reg Harris statue by Jennifer & Mike Oliver. Jennifer is Reg's widow. 11:00am

Leisure ride to Fallowfield Stadium site - hosted by Friends of Fallowfield Loop line - a guided ride with the history of the loop line on the way and Reg's former residence in Levenshulme (no blue plaque yet!) - a safe off road route from 12:00pm

Fallowfield remembered - memories from those who were there. Meet the stars who rode at Fallowfield, including Cyril Bardsley, Geoff Cooke, Tommy Godwin, Alan Partington, Jack Tighe, Les West, and Derrick Woodings. If you rode there as well, please come along! Including the premiere of a DVD of rare footage of Fallowfield racing, including colour images from the 1970's, and the last images of Fallowfield, after it closed, courtesy of Rayfilms. (Also on sale during the day) 11:30am Harris Suite/Boardroom

Fact finding for a new book on Reg, to be printed after the Heritage Day, so the day's events are included in the book with William Fotheringham, the author. From 1:30pm

Meet up at the "Where are they now bar? On the level D in the track Centre to meet old friends from 12:00pm

The Pinkerton Collection - a talk by Doug Pinkerton and a Tour of the exhibits on the Upper concourse 12:00pm & 2:00pm

The Story of George Barnes - Powered flight at Fallowfield by a cycling champion, a talk and book signing by author David Snow "The Story of an Edwardian Record Breaker, Sportsman & entertainer" 1:00pm Harris Suite/Boardroom

Meet Julio César León, the first Venezuelan athlete ever to compete in the Olympics. He rode the Herne Hill Olympic Games cycling in 1948, as is now 86 years old. Julio raced in the same event as Tommy Godwin. TV are filming a documentary about his goodwill visit to the UK. 2:00pm Harris Suite

"Maestro" - a BBC documentary about Reg - DVD on sale, and William Fotheringham book signing at the Rayfilms stand 2:00pm

Tickets now on sale for the UCI Track Nations Cup 2022