A wet day greeted riders and officials at the Quibell Park Velodrome in Scunthorpe on Sunday where the 2010 British Derny Champions and a Youth Omnium were planned to take place. With the outdoor track rendered unrideable by the rain, competition was delayed until three in the afternoon and the Youth event was cancelled.

Racing eventually started on a damp track with the heavens overhead all the while threatening to open during the heats and finals and cause more disruption. Inventive methods were used to dry the track and eventually, the British Championships were held. 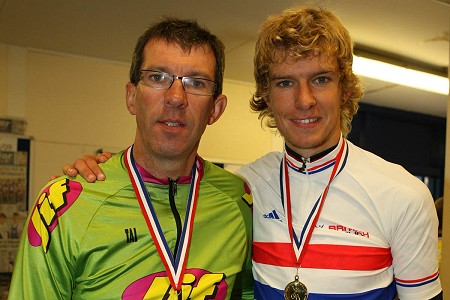 The 2010 Men’s National Derny Championship was won in fine style by Matt Rowe and his pacer Courtney Rowe. The selection of riders for the final was made with the running of two qualifying heats just before the Women’s final.

In the Men's final, after an initial jockeying for better positions, the race settled down to a steady pace. Matt Gittings (AWCycles.co.uk) and pacer George Gilbert took the lead with all the other teams tucked in behind them. For the first half of the race, there were no significant manoeuvres and a steady pace ensued.

After 34 of the 61 laps, Jamie Rogers (Scunthorpe Poly CC) and pacer Steve Parsons attacked from third position to take the lead. Adam Duggleby (i-ride.co.uk) and pacer David Urquhart then countered pushing Gittings back into third spot. After a further 10 laps, James Lowsley-Williams (Agiskoviner.com) and his pacer attacked to take the lead but with the end of the race in sight, Duggleby and Urquhart increased their pace and took the lead back again.

As the race entered the 5 laps to go point, the riders held their position until the last lap when Rowe, a former World Cup race winner on the track, stepped up the pace considerably and overtook the leading three teams down the finishing straight to take the win. 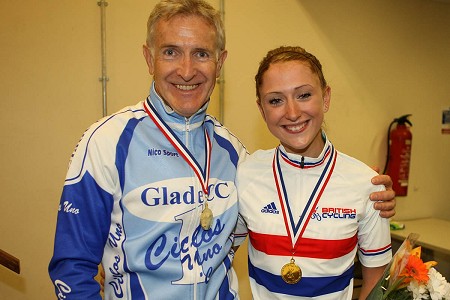 Laura Trott (Welwyn Wheelers) and her pacer Sean Bannister are the 2010 Women’s National Derny Champions. The straight up final was held after a long delay to racing due to heavy downpours saturating the track. After rain eventually stopped before lunch, the organiser managed to convince three of the club members to drive their cars around the track to try to dry it out and racing finally got under way just after 3pm. Eight ladies took to the track for the 31 lap final.

Race winner Laura Trott (Welwyn Wheelers)/Sean Bannister led in the early stages of the race keeping a reasonably high pace before Harriett Owen (Bicester Millenium CC)/George Gilbert took the lead in the mid section of the race. The lead changed again after 18 laps as Laura Trott/Sean Bannister upped the pace again before defending champion, Danni King (Horizon Fitness)/Courtney Rowe took the lead off Trott in the latter stages with a significant increase in the pace.

With the rest of the riders spread out around the track, King and Rowe looked set for the win but with four to go the Trott and Bannister tandem increased their pace and tried to overtake the leaders but didn’t quite make it as King responded by raising the pace yet again.

Such was the pace of both King and Trott they managed overtake and lap the riders contesting 3rd and 4th positions. Young Trott kept up the pressure as King struggled to stay in touch with her pacer and on the very last bend with less than 200m to go, Trott and her pacer managed to get over the top of King who had by now completely lost contact with her derny. Janet Birkmyer managed to hang on for third place.

John Archibald and Jason Kenny were among those crowned national champions on the opening day of competition at the HSBC UK | National Track Championships in Manchester.