Alfie George (Discovery Junior CC) made it three national track titles in less than 24 hours at the Geraint Thomas National Velodrome of Wales.

Having previously only one national title to his name on the track, day four of the competition proved a fruitful day for George.

Victory in the junior male 1km time-trial in the morning session was followed by success in the final race of the day, the BSA Plaque junior points race. Both titles added to yesterday’s success in the Madison with partner Lewis Askey (Backstedt Cycling).

George and Askey found themselves head-to-head in the TI Raleigh Trophy 1km time-trial competition, George having to ride the final race alone as Askey’s foot became unclipped from the start gate, immediately pulling off the circuit.

"It always seemed so hard the past couple of years, but this year it just seemed to happen!"@The_Alfster was seemingly ecstatic with his three national titles at the National Youth and Junior Track Championships 2019!#YJTN2019 pic.twitter.com/EdiiiCanmR

Unfazed by the distraction, George powered around the circuit in a time of 01:04.535 to take the top spot by just two hundredths of a second from second-placed Max Rushby (HMT Hospitals Giant CT) and third-placed Oscar Nilsson-Julien (VC Londres).

A determined Backstedt put the hammer down from the go, catching her rival Ella Barnwell (Liv CC-Halo Cycles) with one lap to go.

Not content with winning Backstedt, passed her opponent and continued to surge forward in an attempt to break the world record.

In a bid to claim another national jersey, Backstedt had earlier decided to withdraw from the 2000m pursuit championship to concentrate on the Madison.

Couzens and Backstedt made for a formidable team, the pair attacking the field from the start, winning four of the eight sprints and putting valuable points between them and the rest of the field.

They eventually posted a score of 73 points, 13 ahead of Madelaine Leech (RFDA) and Morven Yeoman (East Kilbride RD) and 25 ahead of Grace Lister (Wolverhampton Wheelers) and Flora Perkins (VC Londres).

Edward Lowe (Black Line) raced to victory in The Jack Sibbet Trophy - the U16 male 500m time-trial - smashing the National record in the process with a time of 32.734.

Second place went to Harry Ledingham-Horn (Lyme RC) in a time of 32.924, less than 2 hundredths of a second off gold. Tom Sharples (Welwyn Wheelers CC) finished third in 33.307.

The MI Racing Academy duo had to fight hard to win the final sprint and take the maximum 10 points as they headed into the closing laps on 19 points, with eventual silver-medallists Innes Harvey and Max Poole on 18 points close behind.

Josh Charlton and Keiran Riley finished in third on equal points - 17 - with Aidan Lawrence and Finlay Pickering, taking their placing by finishing second in the final sprint.

Jade Hopkins (DIMASCO) upgraded a second place finish in the sprint earlier in the week to win the U16 female 500m time-trial - the Girls TT Trophy.

Recording a time of 36.863, not far off the national record, she beat second place Anna Wadsworth (Beeline Bicycles RT) by seven hundredths of a second. 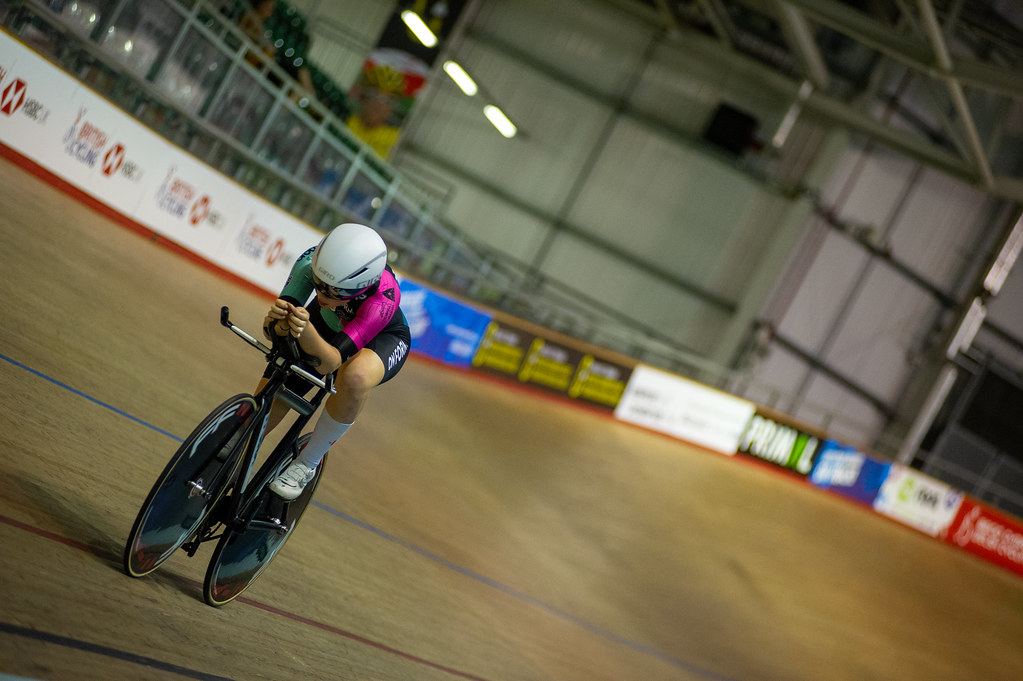