Katy Marchant continued her superb season with a second title at the British Cycling National Track Championships on Saturday, with victory in the women’s keirin.

Marchant leapt from the back of the group at the crucial moment in the final and held off the challenge of James, with Varnish taking bronze.

“It doesn't get much better than that does it, I'm really happy,” said the former heptathlete. “It's good to be up with such a competitive field and come out on top, for me it's just learning to race still at the moment.

“The other girls have got the experience but I've got the engine at the moment and you've got to use it when you can!”

Marchant’s feat was matched by Laura Trott, who took her second British title of the meeting, retaining the scratch race title. 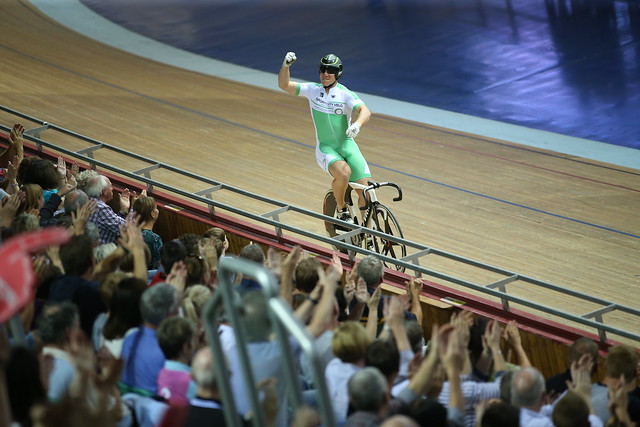 Trott, along with Katie Archibald, lapped the field twice in her quest for a title defence and beat the Pearl Izumi Sports Tours International rider in the final sprint. Bronze went to Manon Lloyd of Team USN.

“It's fantastic,” said a delighted Oliva. “It's what we all work towards, for me this is the pinnacle of this weekend, this is something that I've really wanted for a number of years.

“To come here today and finish the job we started this morning, I can only be happy. This is something that's really been close to my heart for a number of years. It's almost as important as Wales winning the rugby!”

Oliva, first rider to take to the track, held the fastest time for the opening half of the competition before his time was bettered by Andy Tennant, one of a number of endurance riders to take part. But in the penultimate heat Kenny took the lead with a 1.02.042, a time that newly-crowned keirin champion Crampton could not better.

“It's good, I'm happy with that!” said Kenny. “It's a shame that Callum (Skinner) and Ed (Clancy) couldn't ride, hopefully those boys will be back fit soon.

“Matt Crampton has found a bit of form this week, he won the keirin yesterday. He was really strong in that. Today I was just watching him take massive chunks out of my lead in that last lap of the kilo.

“He's going well, so I'm happy to have hung on for the win.”

Oliver Wood was crowned men’s points champion in a frenetic race that saw the 100%ME team dominate proceedings. Wood took two laps on his way to gold, with defending champion Mark Stewart leaping into silver medal spot at the end of 160 laps of racing, thanks to a last-ditch lap gain. Chris Latham completed an all 100%ME podium.

“It's brilliant,” said Wood. “I got the scratch last year, it's always good to get a different one! It's one of the big track events of the year and we've got a lot of strength in depth at the moment, so it's good to race against all the other lads.”

“The best 200m I've done ever,” said a delighted Cundy. “I've set some really good times in training, it's really satisfying to go that fast.

“It's been such a long while since I've had a national jersey, it's quite nice to pull it back on again. To stand on the podium and receive the jersey, it's pretty special.”

“We can't believe we went that quick,” said Thornhill after receiving her British champion’s jersey. “We did a training effort earlier on in the week, we didn't go anywhere near as quick as that so we're absolutely amazed.

“It's great to see at the start of the season, it's really promising.”

Both teams suffered a false start in the final but once they were away, there was no stopping the Pearl Izumi quartet.

“That's my first ever national title, I'm delighted with that,” said Ciara Horne. “It's a brilliant team effort, I'm super proud to be on the podium with three other incredible athletes. It means a lot (to win the national jersey), I don't really want to take it off right now.

“You might see me wandering around the velodrome with it on for a fair bit longer! To have the stripes, what an honour!”

Lora Turnham and Corrine Hall were victorious in the para-cycling BVI pursuit while Jon Gildea retained his title in the C1-C5 pursuit.

“I really wanted to retain the jersey today most of all because my dad’s watching today and he starts chemotherapy on Tuesday,” said Gildea. “So before the race, all I was thinking about was my day to be honest so I just wanted to pull on the jersey for him really.”

Turnham was delighted with her performance after a long spell off the track. “It’s a really positive ride - it just makes me more excited to get on with it and get to the next track race in November because I know we can definitely make massive improvements.”