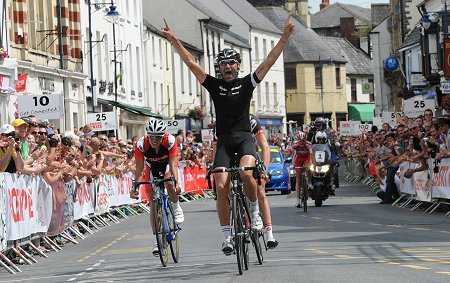 A rider willing to work for others has his big day in the spotlight -- Kristian House wins the 2009 National road race championship.

Rapha Condor's Kristian House won the 2009 National men's road race championship. Prior to the event, much was made of the quality of the field and the race certainly lived up to its billing.

Attack, after attack characterized the day. World-class riders like Bradley Wiggins were seen leading breaks up the road from the off. For many riders it was an ultra-tough day in the saddle. After only 20 miles, with a quality break away up the road, many of the favourites found themselves stranded in a peloton which was splitting asunder as riders chewed the handlebar tape in their efforts to get to the next wheel in front.

Coming off the top of the climb of the Tumble, Bradley Wiggins and Chris Froome had finally broken clear in what was to be the significant move of the race. They had some two minutes plus on the chase group.

However, Wiggins eventually came back to the chasers as the race moved onto the finishing circuit for the first time. Froome continued to lead lap after lap, with a fragmented chase group behind him. When he was finally caught, it was by a quality trio, namely Peter Kennaugh, Daniel Lloyd and Kristian House, who had themselves broken free of what remained of the main field. Froome looked around, took a quick breather and then went again. Initially, no-one wanted to chase him and even on the final lap with the other the playing cat and mouse he continued to attack in the hope of stealing the win.

However, he was finally reeled in one last time and dropped back leaving the way clear for a thrilling final sprint, with Peter Kennaugh leading out the sprint, only for Kristian House to come from behind to win the title in front of a massive crowd. Dan Lloyd was third. A very popular rider, Kristian was overwhelmed and a good ten minutes afterwards was still saying ‘I'm speechless!' 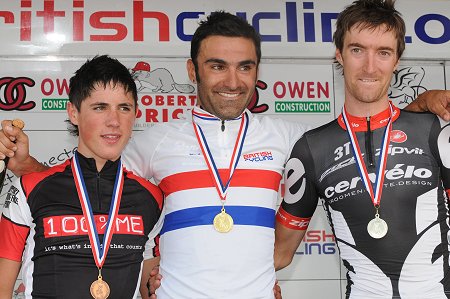 The top three, bronze to Peter Kennaugh, gold to Kristian House and silver to Daniel Lloyd.

Kristian House: "I'm speechless. I was cramping up there at the end. John (Herety, his team manager) wanted me to hit out with a k' to go but if I'd done that, I'd have died. When Froome went, I thought it's over." Asked how he felt as he crossed the line to claim the title, he replied "I don't think I have ever felt like that before. I really don't know what to say."

"I started off riding for Chris (Newton) and Tom (Southam) and I thought I'd slip into some moves and when they rode across, I'd be there. I felt great out there today. Wiggo was so strong and Froome as well, incredibly strong. So you just have to bide your time and wait."

"I am not an out and out winner so you end up working for the other guys but I can't believe I am the national champion, especially off the back of all these crits: this week I raced in Chester, and then Southend. You end just trying to recover as much as you can and I've been having been problems with my hips too, which hasn't helped."

"The course today was perfect for me. The climbs were not too big and on the Tumble, I bided my time and stuck with the Cervelo riders because I knew they were here for the win as well. And these finishing circuits: although the profile was not big, it was quite tough."

On how he and the other 3 riders who chased down Froome got away, he said "that was almost like a soft move. A guy (Dan Lloyd) just rode off the front and I think it was me and Pete who rode across. It didn't feel that hard and then a couple of minutes later John came on the radio and said, we're riding for you now because it has stopped behind."

On the finish, he said "I took the risk of waiting until Pete went because I knew he was the fastest guy there. I think he went from so far out, I think he died at the end and I came off his wheel really late. I thought for a second he was going to close the door on me but he didn't do, so good on him for that."

On how it felt to wear the champion's jersey, Kristian said "I can't explain it - this is something I have wanted for such a long time. I have never been national champion in anything - I came close on the track but to do it on the road and in the one race that really matters, it really is a dream come true."

Peter Kennaugh: “I wasn’t racing for third or second out there – I wanted the win. When I went, they jumped on my wheel but I was confident so went into the last corner as quick as possible and still felt good but over the top where it starts to go downhill, my legs buckled.”

“Since the Giro, I haven’t really recovered or had good sensations. I have got good form but I don’t feel good on the bike. Early on, I was letting it pan out and I had some good teammates who were willing to bring the break back. The further I got into the race, the better I started to feel and I went over the Tumble at my own pace.”

Peter then explained what he saw of the break with Wiggins and Froome, which had over two minutes lead at one stage. He said that it was Wiggins who sat up from that break leaving Froome out front as they hit the finishing circuit for the first time. The key moment of the bike race for Pete was when Froome attacked with a K to go. “Everyone looked at each other and I was a bit stuck for what to do for a split second, but then just went for it.”

Daniel Lloyd: “I am pleased and disappointed. I didn’t deserve to win as I wasn’t the strongest rider in there. I am always really nervous before the nationals. This morning I was just as nervous as I was at the Tour of Flanders. I was really up for it.”

“Once we caught Chris (Froome) the first time, we had quite a big gap. I hadn’t been feeling that comfortable up until then to be honest, but once we caught him, we were going quite easy and you’re never quite sure how the legs are because it’s easy. But on that last lap, I was on my last legs.”

“There is always a bit of luck involved in the nationals. There were a lot of people  behind who were going stronger than me, like Cav was flying and Roger was going good, Brad was going good and it’s a strange thing that you can just slip off the front of a race. Like the final break, I just went through and then Kristian or Pete said, we’ve got a gap and we were away.”

Chris Froome:  “On that last lap, they caught me and I’d go out the back and then they’d be looking at each other so I’d come back and attack again and I kept on getting little gaps and thinking I could hold them off but someone would keep bringing me back. It’s a shame to be fourth after being at the front for the last 100k.”

“Bradley was going well and when he was in the front with me, that was more a threat to the guys behind and I think they were chasing harder when he was with me than they were when I was alone.”

“I started racing in South Africa and it is very similar where you have to race it from the front and be super aggressive. So I am quite used to racing like that.”

“I am gutted at being fourth though after what I did in the race.”

Picture-by-picture Report -- Our thanks to NEG pilot Neil McKenzie for his excellent work in helping us get these pictures of the race unfolding. 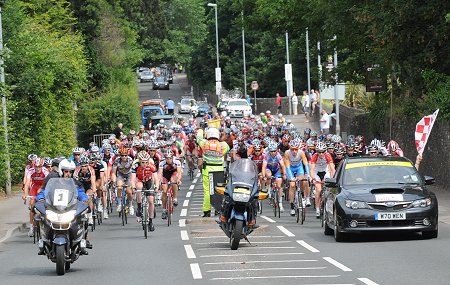 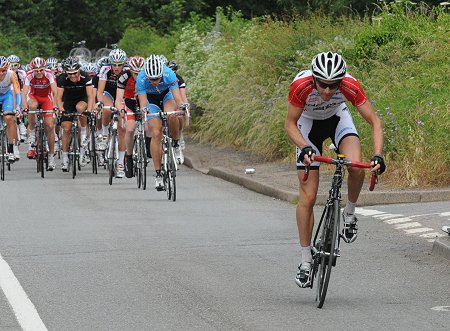 An Endura rider is the first to attack 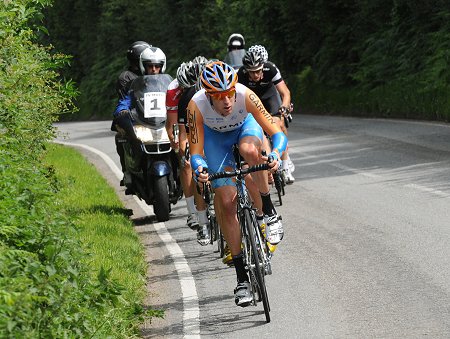 Bradley Wiggin leads a break after around 10 miles 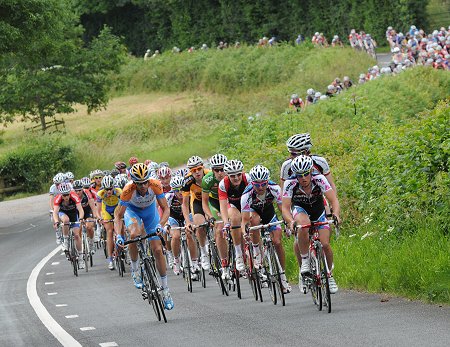 David Millar following up with an attack of his own to continue the frantic pace during the early stages of the race. 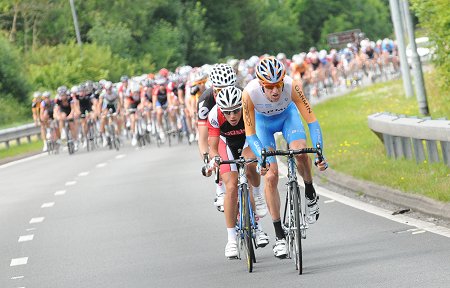 When Millar's move fails to get a group going, Wiggins tries again with Kennaugh and Lloyd for company near Raglan. 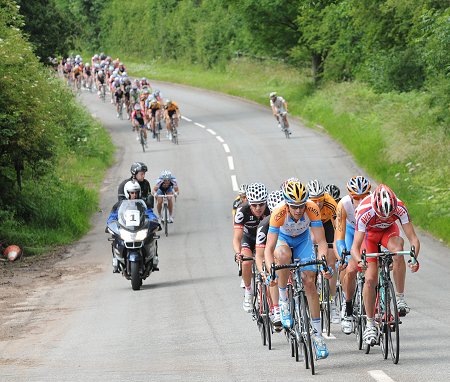 Approaching Monmouth, a group is clear with Millar and Wiggins in the mix as well as Andy Tennant and Chris Froome. 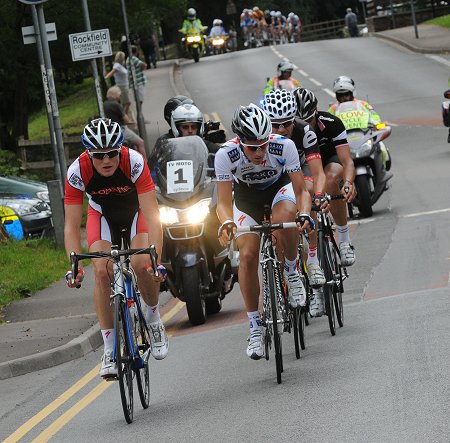 Out of Monmouth, Andy Fenn and Jonny Bellis get across to Hunt, House and Wilkinson. 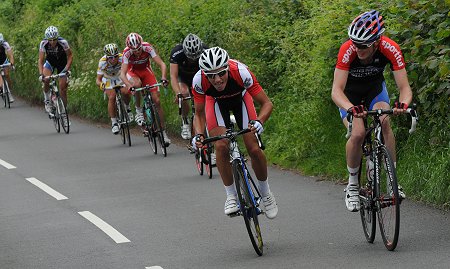 Third group on the road in bits and here Peter Kennaugh attacks to get to the group in front. Mark Cavendish is a few places back here. 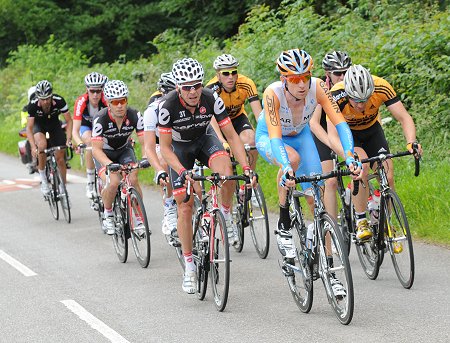 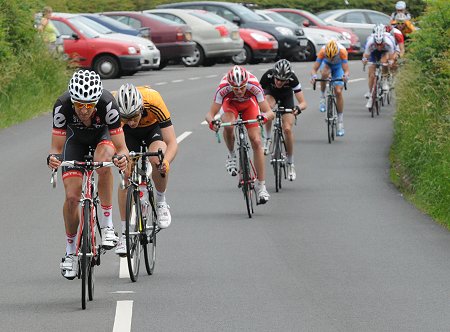 After the front group grows in size as riders get across to it, Daniel Lloyd attacks after there was a bout of follow the leader across the road.

Approaching the dual carriage way before the Tumble and the leading group is all over the place -- Hammond leads Ian WIlkinson and Russell Downing is there as is Andy Fenn, Jeremy Hunt and Kristian House. 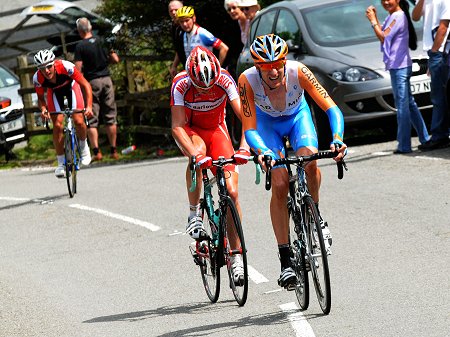 Near the end of the first sector of the Tumble and out of the trees, Wiggins leads Froome with Peter Kennaugh just being distanced. 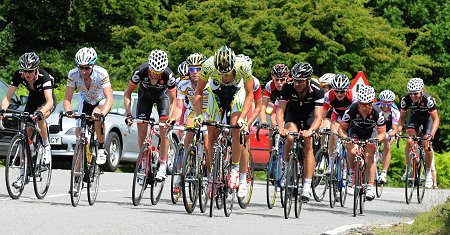 The chase group behind the leaders up the Tumble -- it has in it Mark Cavendish, Kristian House, Ben Greenwood, Dan Lloyd, Roger Hammond, Ian Stannard, Russell Downing, Jeremy Hunt, Andy Fenn and others. Up the road in front of them in between them and Wiggins/Froome were Oli Beckingsale and David Millar. 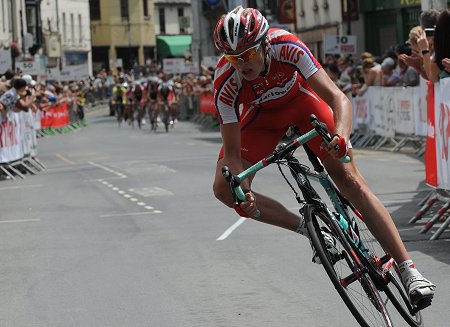 After Wiggins went back to the chasers, Chris Froome carried on alone despite the chasers being so close. 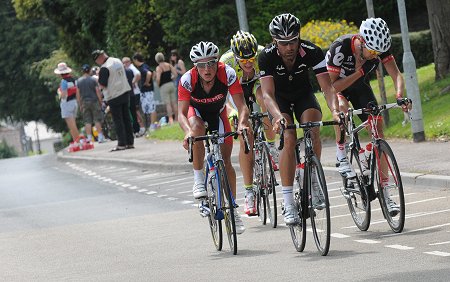 A soft break splits the chase group with four in it, Ian Stannard, House, Kennaugh and Lloyd. 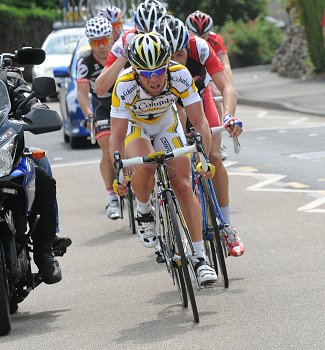 Cavendish was then left without help as most of the riders in this group had teammates up the road. 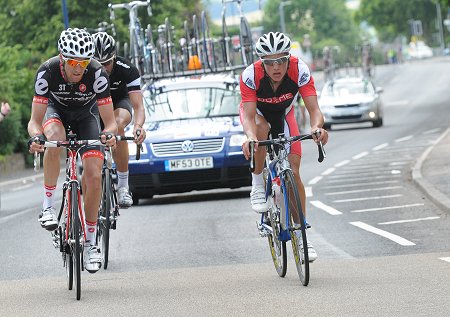 After a few finishing circuit laps, Stannard was dropped to leave three chasers with Froome out front. 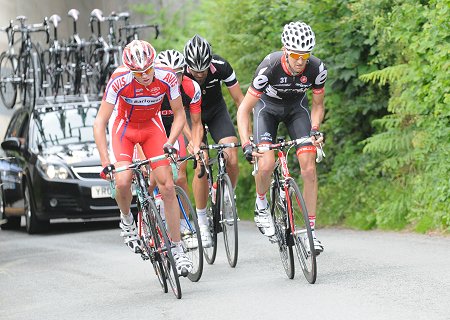 Froome gets caught but ... 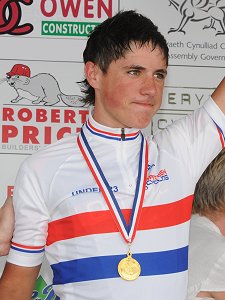 New Website Tip: To change the Home page so you only see the content that interests you, click the ‘Add more to this page' button below the header. A drop down box will appear allowing you to select the content of interest to you by placing ticks in the appropriate boxes.