Team Wales together worked well over the three days of the 2012 RIS Junior Tour of Wales. They took the well deserved Team prize for the Tour, with all members of the team finishing inside the top 20. Hugh Carthy Champion Systems took the Yellow Leaders Jersey and Polka Dot KOM Jersey for the weekend, and National Road Race Champion Sam Lowe, Hargoves Cycles took the Green Points Jersey.  Ed Laverack was the top Welsh rider, finishing in third place overall.

Team Wales with the Mayor of Blaenau Gwent

Michael Heaven, Assistant Coach at Welsh Cycling was pleased with the weekend's performance, "Overall the weekend was a huge success for the riders. All of the riders have worked really hard over the past few months in the build up to the Tour and we set out to put all of that hard work and development in to practice which is exactly what the riders did throughout the weekend.

We started off the weekend with a number of high placings in the TT which then gave us good options for the rest of the race providing we raced well, which was our main goal. The riders knew they had the fitness it was just about riding well as a team, putting themselves in the race and making the most of opportunities.

We had number of riders consistently in the top 5 in 4 of the 5 stages. This consistency was demonstrated when we had 3 riders in the leading group on the final stage demonstrating the strength of the team.

All of this handwork was rewarded with the team prize, 3rd place overall for Ed Laverack, 5th Scott Davies, 10th Dan Pearson and 19th Zach May.

An excellent performance by the riders both as a team and as individuals. They rode with excellent maturity and I am very pleased with the results. With two of the riders only in their first year as juniors we will look to build on this in 2013." 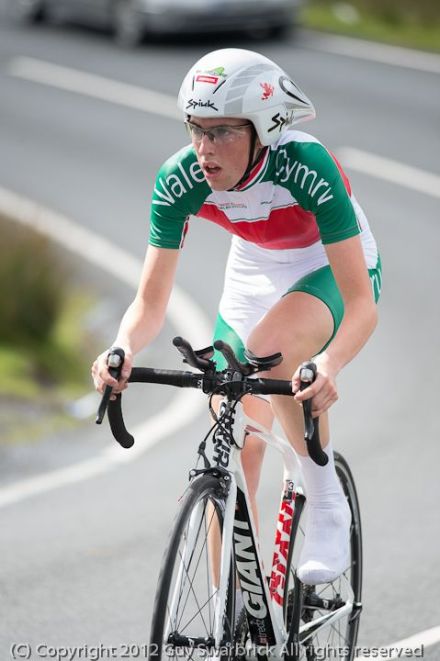 The final stage of the RIS Junior Tour of Wales 2012 saw the weather change to that of a traditional grim and wet Bank Holiday Monday. With the final climb of the Tumble barely visible, the Junior Men were in for a tough day.

Dan Pearson had earlier this year expressed his eagerness to win a stage of the Junior Tour of Wales, with a win on top of the Tumble his aim. Team Wales worked well all day, with Zac May making the move to get away early on in the day, staying away until the final climb. The peloton began to break up on the the climb, with James Knox, Craig Wallace, Hugh Carthy and Wales' Dan Pearson in a lead group. However It was Knox who made an attack with a reaction from Wallace that led Knox over the line in first with Pearson coming in 4th behind the Yellow Jersey of Hugh Carthy.

Day Two began with a closed road circuit stage at Bryn Back Park, Tredegar. 10 laps of the circuit were to be completed, with the opportunity to pick up points in the sprint competition.

Dan Pearson was in contention for the first and second sprint, collecting 5 points. Scott Davies and Ed Laverack also collected individual points in the final sprint for the finish. Laverack came in 4th and Davies in 5th. The stage winner was National Road Race Champion, Sam Lowe of Hargroves Cycles.

The afternoon stage was a flat rolling course of 57.2 miles, a welcome change for many of the sprinters. With a break struggling to stay away throughout the stage, it looked like a sprint finish may have been on the cards. Sam Lowe of Hargroves Cycles took the stage win, his second of the day. Team Wales' highest finisher was Scott Davies in 13th.

Team Wales finish Day One of the Junior Tour of Wales in second place. The team performed well in the stage one time trial and worked together in the afternoon's 45 mile road race, finishing on top of Llangyndir mountain.

The Time Trial saw Ed Laverack finish in 4th place with a time of 12:21. Dan Pearson completed the hilly course in 12:27 putting him in 6th place. Scott Davies finished in 12th and Zach May in 59th after suffering from mechanical problems. This put the team in second place going into the afternoon road stage.

Zach May during Stage One Time Trial

The 45 mile course took the riders from Brynmawr, down to Gilwern along the A465 and through some narrow country lines to Brecon providing a technical route for the Junior Men. They then travelled back through Bronllys and Llangorse, to begin the climb up Llangyndir mountain.

Scott Davies made an early move and stayed with the lead group throughout the race. Team mates Pearson, Laverack and May controlled any attempts to attack the lead group. Climbing the mountain scattered the peloton, with it stringing out along the Welsh roads.

Team Wales managed to hang on in the front, with Scott Davies taking 3rd on the stage. Ed Laverack wasn't far behind in 9th, with Zach May on his tail in 11th. Dan Pearson finished just in the top 20, coming in in 20th.

Hugh Carthy of Champion Systems/Maxgear/Kyklos took the stage win and now wears the yellow jersey for the start of Stage Three on Sunday. Team Wales remain in second, with Central Region leading the Team Classification.

It was a tough day for the riders with some steep climbs. Sunday's stage at Bryn Back Park is a reasonably flat closed circuit, followed by stage four taking the riders from Brynmawr out to Raglan and finishing outside the Hardwick.

Welsh Cycling will be represented by a team of four Junior Men at this weekend’s Junior Tour of Wales taking place across the South Wales Valleys.

Welsh Cycling will follow the team this weekend, with results posted on the Welsh Cycling Twitter page after each stage.