Many years ago I found an early 1950s Polish cycling poster advertising ‘Wyścig Pokoju’. This was the Peace Race, the famous two week stage race run off annually between Berlin, Warsaw and Prague during the Cold War. The poster depicts a group of cyclists riding under the flags of the host nations, with an industrial landscape in relief. Along the roadside an ordered but enthusiastic crowd, each wearing a red bandana, waves the peloton by. From up above, Picasso’s white dove, the symbol of the event, confers security upon the riders. Its presence guarantees safe passage as they traverse three countries devastated by fascism but now united and rebuilt through collectivism. 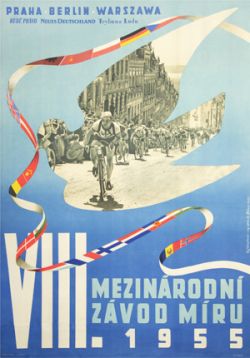 The poster bears all the classic propagandist leitmotifs of post-war socialism. It invokes the joy of community, the value of work and heavy industry, the fellowship born of mutual endeavour. It brilliantly embodies all of the ideals of Marxism, with the Peace Race cast as perfect sporting metaphor. Like the race itself it’s mysterious and beautiful, and it perfectly captures the optimism and idealism of the immediate post-war years.

As I began to understand the social, geopolitical and sporting significance of the race to the people of Poland, Czechoslovakia and East Germany, so I started researching the artist who had created this poster. In the best Cold War tradition it would prove difficult but, like all such projects, truly fascinating. It transpired that every year each of the three host countries commissioned one of their very best graphic artists to design a promotional poster for the race. Thousands would be posted along the route in the preceding weeks and then, like all posters, would be torn down and replaced. Like all posters they were essentially a call to action, a rallying cry for local populations with little or no access to electronic media. In the case of the Peace Race they were, apparently, hugely effective: millions, quite literally, would watch the stages. 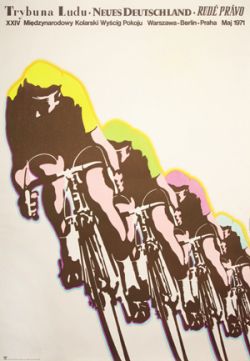 Though the event existed in the sporting black hole which was the Soviet Bloc, as regards pure spectacle it was a class apart. For all that it was ostensibly an amateur race (professional sport didn’t technically exist under communism) its mass appeal far outweighed that of the Tour de France. Or that of any other western European sporting event for that matter…

At the cessation of World War II most of Warsaw lay in ruins; an estimated 80 per cent of the city destroyed. As vast acreages became either building site or bomb site, protective fences started to appear all over town. They served to create natural galleries, which were readily appropriated by the city’s artists.

Thus the humble poster, the most egalitarian and immediate of all art forms, played its part in reanimating a city and its people. Warsaw had long been one of the cradles of European graphic art, but now a new wave of designers emerged, encouraged by the free space on offer. Pretty quickly, however, they were either driven underground or found their creative horizons foreshortened.

As the country was Sovietised, control over the supply of such goods as there were was tightened. In retrospect it was unsurprising in a country that had suffered an estimated 30 per cent population loss, but it soon became clear that one form of totalitarianism had simply been replaced by another. 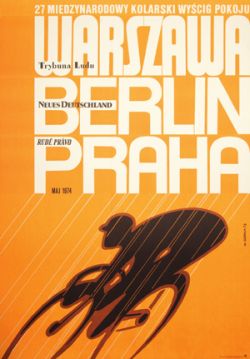 All official (ie. paying) art was commissioned centrally, heavily censored and heavily steered towards propagandist Soviet-style realism. Posters of the era are characterised by imagery of an enlightened proletariat, delivered gleefully from the clutches of fascism by Stalin’s munificence. Many of the early Peace Race works are imbued with precisely this kind of political symbolism, albeit without the crass, heavy-handed dogma prevalent in Russian graphic art of the time.

This is an extract from “Wyscig Pokoju”, courtesy of Rouleur magazine. For the full story, and many more like it, sign up to Rouleur today. All British Cycling members get their first issue of Rouleur FREE.

Four Peace Race Posters are available to buy through Rouleur. Members of British Cycling can get hold of to two exclusive Peace Race bundles by visiting the Rouleur member benefit page.