The Abergavenny Festival of Cycling takes place 13th - 15th July 2012 with bike racing and supporting activities taking place throughout the weekend. Below are details about 'On the Fringe' activities in Abergavenny during the festival.

Blood, Sweat and Gears - A Film by Nick Davis

Blood, Sweat and Gears is the story of a unique American professional cycling team, a team devoted not only to cleaning up the sport of cycling but to succeeding in the Tour de France.

Setting off from the frozen roads of a Colorado winter, racing over the dangerous cobblestones of the Spring classic Paris-Roubaix, and finally arriving at the Champs-Elysees, the grand Parisian boulevard which marks the end of the Tour de France, this riveting, eye-opening documentary takes viewers on an incredible emotional journey, following the ups and downs of an underdog cycling team as they try, against all odds, to ride triumphantly into Paris. From the intensive daily training required to compete at the highest level to the glory of winning races against the world’s best pro riders, Blood, Sweat and Gears captures the passion and suffering of this simultaneously beautiful and brutal sport.

The event is free. We will be raising funds for Wales Air Ambulance and donations will be gratefully received. 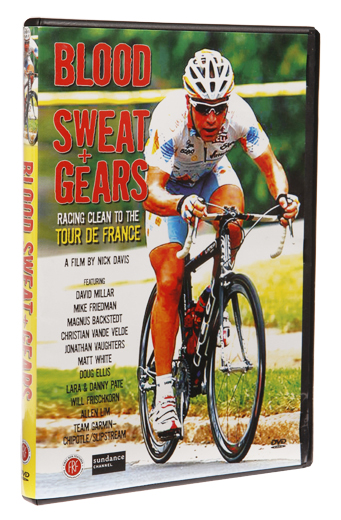 An illustrated talk by top cycling journalist and author William Fotheringham about the incredible Eddy Merckx. Eddy Merckx is to cycling what Muhammad Ali is to boxing or Pelé to football: quite simply, the best there has ever been. Merckx was a machine. He didn’t just beat his opponents, he crushed them. But his triumphs only tell half a story that includes horrific injury, a doping controversy and tragedy. For Britain’s leading cycling writer, William Fotheringham, the burning question remains, why? What made Eddy Merckx so invincible? The result is this extraordinary and definitive story of a man whose fear of failure would drive him to reach the highest pinnacles before ultimately destroying him.

William Fotheringham writes for the Guardian and Observer on cycling and rugby. A racing cyclist and launch editor of procycling and Cycle Sport magazines, he has reported on over twenty Tours de France. He is the critically lauded author of Fallen Angel, Roule Britannia, and Put Me Back on My Bike, which Vélo magazine called 'The best cycling biography ever written.'

Rob Penn's latest book It's All About the Bike: the Pursuit of Happiness on Two Wheels is published by Penguin Press in the UK. It was a Sunday Times bestseller. 'Gem of a book,' Economist. As a journalist, Robert writes for the Financial Times, The Observer, Sunday Times and Conde Nast Traveller, as well as a host of cycling publications.

Tickets are £4.50 from Abergavenny Borough Theatre – Box Office 01873 850805 or www.boroughtheatreabergavenny.co.uk