On the final day of competition Elinor Barker was crowned National Junior Womens Pursuit Champion. Emily Nelson continued her good run of form during the Championships to add another silver to her medal haul in the 500mtr TT followed closely by Ellie Coster in bronze. 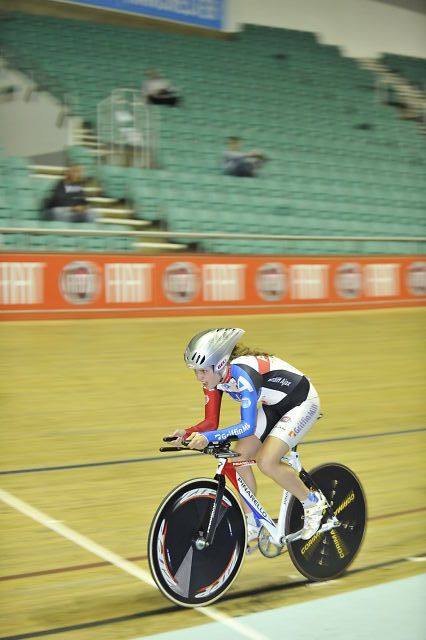 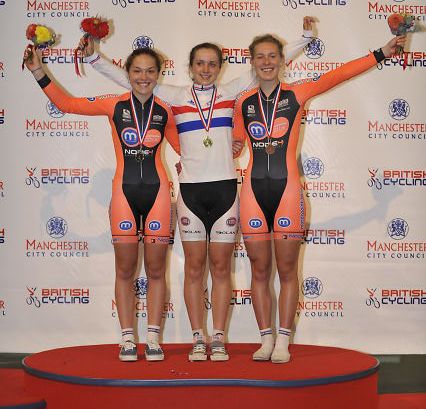 Elinor Barker finally got the title she deserved

It was a wonder week for Nelson, finishing with silver in the 500mtr TT

Coster on her way to bronze in the 500mtr TT

Owain Doull continued his run of good form by winning a silver medal in the Junior Mens pursuit on day 5. Doull qualified fastest in the morning session, beating team mate and European Champion Jon Dibben. In the final Doull pushed Dibben all the way but it was Dibben who finished stronger to take the title. Both riders will be taking part in the Junior Tour of Wales which takes place this weekend.

Emily Nelson continued to impress at the Championships by taking a 3rd medal in the u16 Girls points race. Nelson has been in great form and she added a bronze to her medal tally with some great sprinting throughout. Amy Hill managed to take 4th behind Nelson.

Robbie Westwood was up in the under 16 sprint and managed to make it through to Fridays semi finals.

Doull on his way to a Junior Pursuit silver

Emily Nelson is in the form of her career and following on from her 3rd in the pursuit she went one better and got herself a fantastic silver in a really close sprint that almost saw her take gold.

Elinor Barker came close a title again in the Junior Womens Scratch race but it was not to be. The Motorpoint riders once again controlled the race enough to get their rider to the line first with Barker sprinting home for 2nd.

Robbie Westwood riding in the 500mtr u16 Boys TT blasted himself around the track to come home in 3rd place. Westwood was one of the early runners but his time was fast enough to see him take 2nd for most of the competition. It was only in dying stages that he was bumped out of 2nd by a few 100s of a second.

Rob Westwood on his way to a bronze

Doull on his way the Junior title 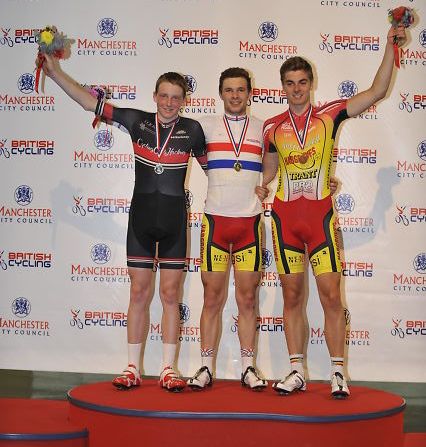 Day 3 - The medal tally keeps increasing for the Welsh riders

Amy Hill of Newport Velo and Emily Nelson of Halesowen both secured medals in the finals of the under 16 girls pursuit. Hill battled hard in her pursuit for the gold medal and after an early lead she narrowly missed on the win. Nelson dominated the ride off the bronze medal and will look to continue her run of good form going into day 4.

Owain Doull opened his National account with a silver in the Junior mens scratch race. The scratch event can sometimes be a bit of a lottery but Doull looked strong and confident throughout race with a strong finish to take the silver.

The Welsh riders are well on their way to breaking the record for the most medals won in the championships in any one year. Keep up the good riding guys.

Megan Barker and Emily Haycox filled the 2nd and 3rd place steps on the podium for the u14 girls omnium Championships. Both riders from Maindy Flyers were in day long battle with the overall winner Grace Garner. Barker took an early lead in the competition, winning the Pursuit but it was Garner who the remaning events to secure the win. Haycox had to battle hard for 3rd place but a 2nd place in the sprint gave her just enough to secure the bronze medal.

Ellie Coster riding in the under 16 girls sprint was the hot favourite going into the competition.
The first year under 16 rider qualified in 3rd place with a time of 12.640 over 200mtrs. The Bush Healthcare CRT rider then went on to make it in to finals with relative ease with Emily Kay being the only rider to really challenge her. The final saw two great, close sprints that both went to the line but it was Khans day and she walked away with the jersey.

Emily Haycox on her way to 2nd in the sprint

Ellie Coster on her way to 3rd in the 200mtr qualifier

Ellie Coster beats Emily Kay to go through to the final

4 podium spots out of 6 were filled by Welsh riders in the Youth C category at the National Junior and Youth Track Championships event held in Manchester. Day 1 of the Championships saw Welsh riders walk away with two title and two bronze medals. Tomos Owens and Jess Roberts both pulled on the Champions Jerseys at the end of the day with James Tillett and Sophie Williams stepping onto the 3rd step of the podium. The future generation of Welsh Track Cyclists have got proceedings off to a great start.

Jess Roberts on her way to the jersey 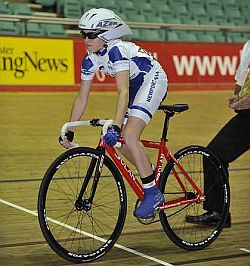 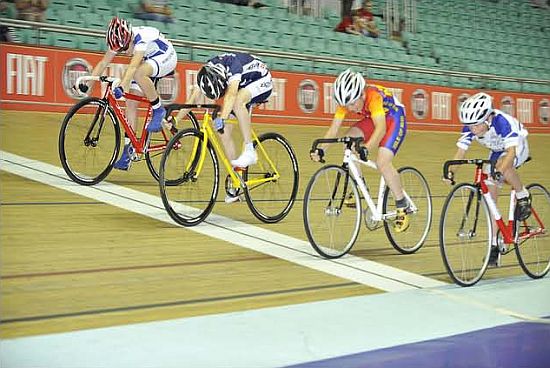