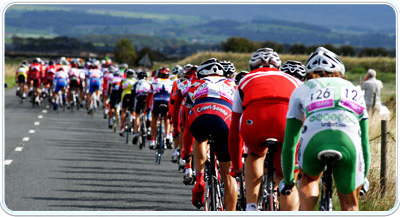 Calling all cyclists
young and old!

On Monday 15th August 2011 a special launch event will take place in Caerphilly to announce the Welsh stage of the forthcoming Tour Of Britain cycle race.

The Welsh stage of the race will take place on Wednesday 14th September when ninety six of the world's top professional cyclists will compete to wear the new IG Markets Gold Jersey of race leader. This stage is set to be the hardest section of the competition as the competitors face the uphill route to Caerphilly Mountain at the end of a gruelling 182 kilometre ride from Welshpool to Caerphilly.

Caerphilly County Borough Council is delighted to be involved in hosting the finale of the Fourth Stage and is keen to secure a regular place in the race's future plans.

Cllr Ron Davies, Cabinet Member for Regeneration and Planning said "We are planning a special launch event and calling on cyclists from across South Wales to join us on Crescent Road in Caerphilly (adjacent to the magnificent Caerphilly Castle). We are aiming to beat the Guinness Book of World Records for ‘the longest single line of bicycles - 916 cyclists'. So whatever your preferred mode - BMX, cycle speedway, cyclo-cross, mountain bike, road and track cycling - please make the effort to join us at 12 noon on Monday 15th August 2011 as we're aiming to get 1000 bikes on the site"

"We have exciting plans to celebrate the UK's biggest professional bicycle race, which attracts over a million spectators to the roadside and hundreds of thousands more on television and via the internet. We want to make a real Welsh welcome for the race and riders and so our launch event has got to be outstanding and something really special." said Cllr Ron Davies.

Cyclists should meet at Crescent Road, Caerphilly from 12 noon onwards. On site will be Tour of Britain representatives along with professional cyclists from some of 16 international teams and their sponsors. Gwent Police are supporting the event and will be on hand to offer security advice to the cyclists. Local suppliers to cyclists and all of the cycle clubs in the county borough are also being invited to play their part in the event.