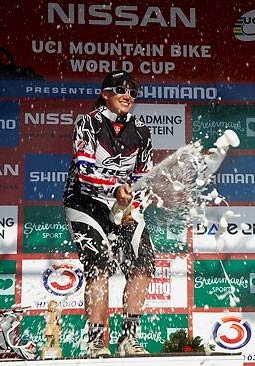 After a winter of training in the snow and ice it didn't take long until I was getting a good tan of sun and dust in South Africa at the Cape Epic when I travelled out at the end of March. Check out my Epic reports here.

With the Epic completed and still in one piece and not entirely ruined I then had two weeks to recover and get some downhill bike time before the first World Cup in Pietermaritzburg, just a short flight from Cape Town. We arrived a week before the World Cup and raced the South African National on the same course that would be used for the World Cup a week later. The weather however was not a typical South African autumn weekend, it rained and rained and rained so much that the race had to be started lower down as no medics could get to the top of the hill. After qualifying, the conditions got worse and the vehicles could not even get the riders to the start half way down the hill so the race was cancelled. It was decided to take the result from the qualifier for the final result - and while that was good for me, it had not been a great weekend of time on my DH bike. Instead I had the opportunity to do a couple of intervals on the pedalling section of the course in conditions that I am sure could get no worse even if it rained the following weekend at the World Cup!

Fortunately for both the riders and the organisation the sun came out and the track just got drier and drier for the World Cup. It was super fast and pretty good fun to ride except for the 45+ second pedalling section in the middle of the track ! I think all the Epic miles in my legs certainly helped although I had been used to slightly less intensity for a long time, so in my race run I tried so hard on the flat section that I completely blew up at the finish and only just held on in a few places, but it was good enough to take the perfect start to my year with a win at round 1 of the World Cup.

After being away from home for over five weeks it was great to be back, but all that lovely summer you had in the UK in April seemed to end as soon as I arrived! However I had a few weeks of downhill racing and with my new found XC legs decided I would have a go at the Dalby XC World Cup!

I have always ridden loads of cross country, in fact my first downhill race was on a XC bike so it was something that I have always followed. After our Trek team cross over challenge last year where the XC and DH riders both swapped disciplines for a combined race I said back then I would love to do an XC World Cup one day...and well here I was about to have a go!

I spent two days with the Great Britain Cycling Team up on the course before the race, just to get a feel for it and make sure I wouldn't entirely embarrass myself! I also did the Southern Championships the weekend before Dalby as a bit of practice and to my surprise found myself at the front of the race and took home the title!

The following weekend was somewhat a different challenge. I also took part in the Sprint Eliminator race around the streets of Pickering. I really had no idea what to expect, and when I walked the course I was not looking forward to the prospect.

I somehow managed to qualify in fourth spot and after that horrible two minute effort felt like I was going to pass out on my way back to the pits as I could see double and had a very fuzzy head! That was only qualifying! I then managed to take the holeshot in every one of my heats only to get passed in every heat on the last climb up to the finish...still managed to get through to the small final and finished in seventh spot!

I was pretty happy with that at my first attempt, sadly my legs were not so happy as I could not get to sleep for a few hours that night as my legs were throbbing so much!

By the time Sunday came around it was time for the proper race. I thought I would be recovered ok, but as soon as I hit the first climb on lap one I just had nothing, no power in my legs! This was going to be a long and painful experience, five laps with dead legs! However, I managed to keep a steady rhythm going and if it hadn't have been for a puncture on lap four I may well have been able to complete my full five laps, but I got pulled from the race. I still finished a respectable 69th, but I was disappointed as the goal I had set for the race was to complete my five laps....there may well now have to be another occasion to achieve that goal sometime in the future!

With my crazy XC exploits done it was back to my proper job, downhill racing and getting the chance to wear that rainbow jersey for the next few months! I was planning to take part in the National race at Glencoe but sadly due to some wild Scottish weather the race was cancelled on the Sunday morning due to high winds and the gondola not being able to operate. The weather was still grim at the start of the week of the World Cup in Fort Bill so I headed up to Aviemore where the forecast was much nicer and spent a couple of days training and resting in the sunshine. Back to Fort William on the Wednesday night and back to more rain and wind! Fortunately the weather improved and behaved itself and treated all the riders, organisation and fans to yet another sunny and dry Fort William World Cup! I feel as though we have been a little spoilt the last few years.

Fort William...well...where do I start. I was looking forward to it so much this year as current World Champion to race in front of a home crowd, but somehow I was also coming into the race as World Cup Leader so that in itself was such a great feeling and experience. Fort William has treated me to so many special moments over the years starting with my fist ever World Cup win back in 2002 and ten years on I'm still racing and looking for win number 5 on this track. I was conscious not to over practice this weekend as I hadn't done loads of downhill and was worried I wouldn't have the specific downhill strength. I went into qualifying not really knowing if I was going fast or not. I ended up second only 0.2 secs behind Rachel Atherton so I now knew I was going ok, but felt as though I could ride the track a lot better in a few places so I decided the walk the course after qualifying.

That certainly helped and I ended up going over ten seconds faster in the final run and took the lead by seven seconds with only Rachel to come. It was going to be a tight race as Rach is always on form and always races well, but I managed to just have a bit more strength in the final pedalling section and won by 1.7 seconds. It was such an amazing feeling to win my fifth World Cup in Fort William. Yet another memory that I will never forget. 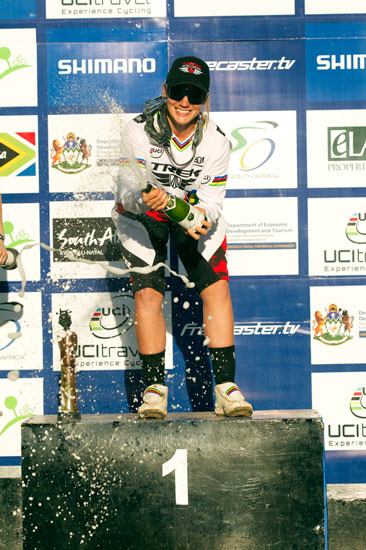