Images: Fraser Watt & Will BeresfordThe Youth Tour of Scotland is a four day stage race around beautiful Perthshire between 6th-9th April. The event is in it’s eighth year, hosting 20 Boys teams and 20 Girls teams from all over the UK and Europe.

Keep up to date with startlists, results and reports all weekend here...

A nervous girls peloton set off from Forteviot village for a wet and wild Stage 1 of the 2019 edition of the Youth Tour of Scotland. The dreich conditions didn't stop the females from racing hard as three riders attacked hard off the front on the opening lap. The Forteviot road race course is a lung busting rollercoaster with a corkscrew descent and riders having to chase hard to stay with the bunch.

Commentary and banter was provided throughout the stage by Matt Payne who kept the soaked spectators abreast of developments out on the course.

Having dominated at the 2018 edition of the Youth Tour of Scotland, and fresh from winning the under-17 Gent-Wevelgem last week, Team Wales rider Zoe Backstedt was a driving force at the front of the peloton with VCL and Scottish Cycling West sharing the load.

A crash caused havoc in the last lap. While there were no serious injuries, the peloton was fractured coming into the home straight. Despite wet conditions it was an all out sprint to the finish with a fully committed Backstedt lunging across the line first. Imani Pereira-James (SC West) was close behind and Eva Young (SC West) took third. 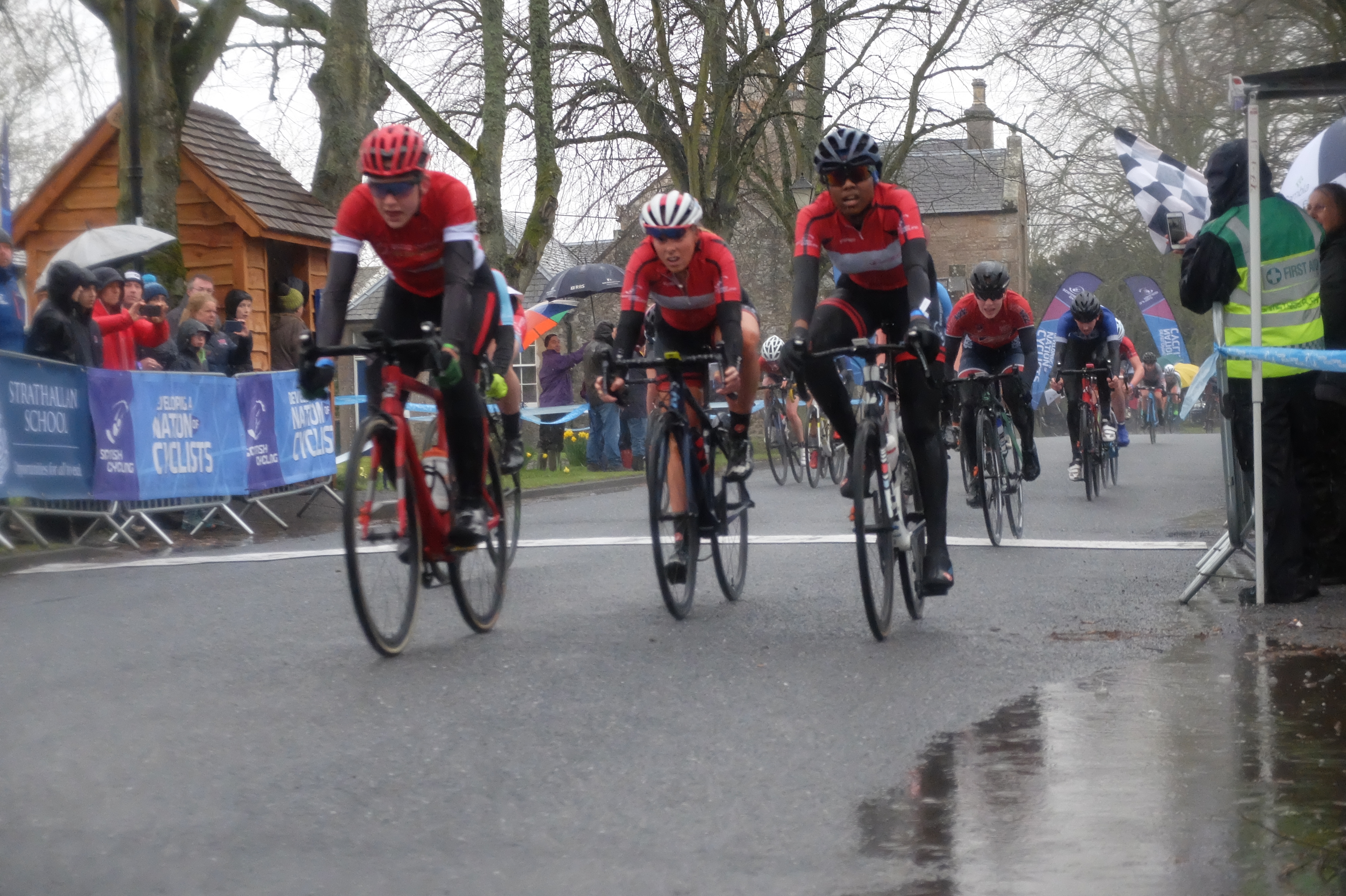 The Stage 1 jerseys were taken by stage winner Zoe Backstedt who swept up the red spotted jersey of the Queen of the Mountains and the green Points jersey. She will start the Team Time Trial in the all important yellow jersey as the leader of the General Classicifican.

Imani Pereira-James (SC West) will begin tomorrow in the Best Scottish Rider jersey and the team of Scottish Cycling West sit top of the Team Classifican having taken second and third on the podium.

The Peter Clark Award, given to the rider who showed the most grit and determination throughout the race was given to Natalie Bloomer of VCL.

The rain stopped just in time for the flag to drop on the boys race. Two riders clipped off the front straight away, but Scotland Green was having none of it, shutting the move down instantly. The technical decent and damp roads caused the peloton to string out. Some riders struggled with the pace early on, fighting hard to stay in the race in order to start tomorrow.

With four laps to go the bunch was largely all together, the teams of Yorkshire, Isle of Man and Scottish Cycling South West shared the work and the group spread across the twisty coutry roads of Perthshire. Five laps left and it was all go in the 46 strong peloton. The team from Yorkshire attempted a two break but nothing was sticking. The bunch was determind to take this race to the line.

Coming into the home straight, Scottish rider Daniel Kain launched his sprint to take the win, looking thrilled and surprised in equal measures. Benjamin Peatfield (Green Jersey RT) and Joshua Giddings (BC East Mids) making up the rest of the podium.

In addition to taking the General Classifican after Stage 1, Daniel Kain also won the best Scottish Rider. Joe Kiely (BC Eastern) claimed the King of the Mountains and Josh Giddings (BC East Midlands) took the Points jersey. Scottish Cycling North East boys team will join Scottish Cycling West girls in the red Team jersey for the Team Time Trial. The Peter Clark Award was given to Morgan Gibson Clay (BC South West) after riding on following a crash.

Scottish Cycling was pleased to welcome Wayne Harvard from Strathallan School, Forteviot community respresentative Diana Roth and Gareth Edwards from the Scottish Cycling Board to present the prizes for Stage 1.

The Youth Tour of Scotland continues tomorrow at St. David’s, Madderty with a Team Time Trial and Road Race.

The Youth Tour of Scotland headed to St. David’s near Madderty for Stage 2, a Team Team Trial and Stage 3, a road race. The community provided exceptional hospitality and spectators admired the dafodils while watching some brilliant racing.

The girls race set off at a brisk pace, having familiarised themselves with the course during the Time Trial. By the time the group had completed the first lap, their General Classification leader Zoe Backstetd of Team Wales had broken away. Throughout the subsequent laps she worked up a substantial lead despite teams from Yorkshire and Scottish Cycling West attempting to take up the chase.

Throughout the race, several riders dropped off the back off the bunch, suffering mechanicals, minor crashes or simply finding the pace too hot. These riders put in exceptional performances,fighting hard throughout the grueling 5 lap course in order to start tomorrows stage.

The Queen of the Mountain and Points competitions were swept up by Backstedt while on her solo mission around Madderty. The minor placings were taken by a variety of riders, hoping to gain a few bonus seconds and move up in the competition.

Backstedt celebrated her well deserved win, while the peloton launched a full scale assault towards the finish line. Flora Perkins (VCL) won the race for second and Lola Ellis (Sportcity Velo) took third. The winning team was Wales and the Peter Clark socks were awarded to Lucy Dalgleish of Salt Ayre Cog Set who battled mechanicals, crashes and injury to complete the stage.

Going into the final stage tomorrow, Wales leads the Team competition, Imani Pereira-James maintains her lead on the best Scottish rider, and will be in the jersery. Zoe Backstedt leads the GC, QOM and Points competitions.

All Change in the GC

After a storming effort in the Team Time Trial, Josh Giddings of British Cycling East Midlands went into Stage 3 as race leader and looked keen to maintain the lead. Unfortauntely, a mechanical issue held him up and he was forced to chase throughout the race.

Meanwhile, the peloton seemed content to amble through the Perthshire lanes contending the KOM and Points competitions. Joe Kiely (BC Eastern) rode a clever race, hunting down the King of the Mountains points and increasing his lead on the competition.

The most convincing breakaway attempt came contained Ross Birrell, Owen Lightfoot, Fredwich Newman and Josh Charlton. The foursome gained 14 seconds on the bunch only to be reeled in by the bunch.

After 9 laps of racing the peloton charged towards the line. Ben Partridge (BC North East) sprinted to victory, Ben Peatfield (Green Jersey RT) second and Daniel Kain (SC North East) claimed third. The winning team on the stage was British Cycling Eastern. The Peter Clark Award was given to Ben Houlihan of BC Yorkshire after he completed the stage one handed following a crash.

It's all to play for going into the final stage tomorrow. Only one second seperates first and second in the General Classification. Ben Peatfield (Green Jersey RT) wears the leaders jersey, but Daniel Kain is a close second. Ben is also leading the Points Classification. Joe Kiely leads the King of the Mountains and Daniel Kain maintains his lead in the Best Scottish Rider competition. The overall Team leaders are BC East Midlands.

Tomorrow will see riders race a fast and furious Kermesse around the grounds of the stunning Strathallan School which has played host to the Youth Tour of Scotland all weekend. It's going to be a spectacle, so don't miss out on the chance to see the countries best youth racers fight it out for the final podium places.

The final stage of the Youth Tour of Scotland takes place around Strathallan School with a Kermesse style course. The fast technical circuit challenges riders with speed bumps, narrow roads and a steep climb at 200 metres to go. A tough ride for a rider with fresh legs, nevermind those who have already completed two tough days of racing.

Girls kick off the Kermesse

The girls race saw our General Classification leader Zoe Backstedt launch another solo breakaway and gain over a minute on the peloton very quickly. Several riders were shed very quickly on the climb due to the pace of the bunch. They battled on up the incline to the cheers of brilliant supporters who were basking in the Scottish sunshine.

Victory for the King of the Mountains

It was the day of our King of the Mountains leader Joe Kiely of BC Eastern as he stormed to victory having been in the breakaway for nearly the entire race. His breakaway companions were Callum Thornley, Aiden Lawrence and Frazer Gault who forged a lead of over thirty seconds after 6 laps out in front.

A diminished peloton chased hard around the narrow course in an attempt to bring the breakaway back. Shelled riders formed smaller groups who worked together to ease the burden of this famously testing course.

As the bell rang to mark the start of the final lap, the breakaway had lost it's cohesion and was now down to two men, Kiely and Lawrence. Mountain goat Joe Kiely (BC Eastern) broke clear on the climb to sprint to victory and complete his supremacy over the KOM competition. Aiden Lawrence (Green Jersey RT) took a well deserved second and secured the overal General Classification win, and Lukus Nerurkar (BC South East) was third. Fraser Gault was Best Scottish Rider for the stage, Joe Kiely won the Points and KOM and Green Jersey RT were the winning Team. Jack Brough from BC East Midlands was awarded the Peter Clark award after suffering a mechanical and running with his bike for a lap and a half, covering nearly 5km on his feet!

The final prizes of the 2019 edition of the Youth Tour of Scotland were presented by Perth’s Provost Dennis Melloy, Chair of Scottish Cycling Kathy Gilchrist and Head Master of Strathallan Mark Lauder.

Scottish Cycling would like to thank Bridge of Earn Community Council of Forteviot, Forgandenny and St David's Village for their wonderful hospitality across the whole weekend. We would also like to extend thanks to all of the staff at Strathallan School and our fantastic volunteers and officials; the Youth Tour of Scotland would not happen without them.

Final, a huge thank you to all riders, Team Managers, Coaches and support staff who have given 100% throughout the weekend. The Youth Tour of Scotland team hope you enjoyed it as much as we did.

We look forward to welcoming you back next year.