In sharp contrast to the wet weather that caused the cancellation of the previous week's round, conditions were surprisingly good for the 329 competitors who made it down to the National Sports Centre last Tuesday night for round thirteen of Team Royal London 360 Isle of Man's Youth League. 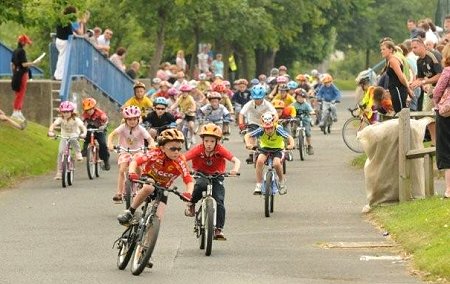 Off-island media interest in the league continues to increase and interested spectators on the night included a reporter from the Daily Mail newspaper and a film crew from a British government sponsored organisation called ‘Join In Local Sport’, who are making a series of short films to tell the stories of where Great Britain's Olympic medal hopefuls started out.

The novices race got the proceedings underway, with Sydney-Ella Patterson edging out Jessica Rich for the honours. Colby Newbold beat Summer Peters to the line for third and Fearne Bregazzi led Zack Bellhouse home for fifth. Chloe Hampson rode clear of the main chasing bunch to grab seventh, leaving twin sister Caitlyn behind to take the sprint for eighth. Cameron Hounsell and Sophie Hindson completed the top ten.

In the born 2007 and later age group Sam Cowin outsprinted Orry Lund for his seventh win of the series. The fast finishing Cian Howard was third and Charlie Morris pipped Alex Andrew for fourth, with William Curphey holding off Archie Dunn and Myles Le Geyt in the dash for sixth. T.J.Teare was a safe ninth and Lewin Scarffe won the eleven-strong group gallop for tenth. Jemma Quayle was the top girl in 14th place.

Strengthening his position at the top of the overall standings, Niall Colquitt got the better of Harry Kneen, Oliver Sykes and Mairi Harrison for his eighth victory in the born 2005 category. Oliver Corkish escaped from a chasing group of five riders to claim fifth and Chloe Dillon overcame Harry Boyle, Teddy Dunn and Alexander Deering in the gallop for the final place on the top six leader board.

In the born 2004 event Zac Walker snatched the win in a keenly fought sprint finish with Dillon Dowson. Onchan's Billy Kennedy was too fast for Toby Craig, Cameron Dudley, James Devereau and Kiera Prentice in the scramble for third, while Nathan Slack kept Joshua Dudley at bay for eighth. Daniel Keen rounded off the top ten.

Jonty Bregazzi emerged from a leading group of five riders to take the victory in the born 2003 race. Matthew Black was second followed by Chad Magill, Thomas Skillicorn and Jack Christian in that order. Joshua Glover got past Thomas Young on the finishing straight to secure sixth and Tyler Hannay led Darcy Cain in for eighth. Neill Maxwell was a lonely tenth and William Stokes stayed ahead of chasers Ryan Quirk, Emily Kinley and Megan Cannell to secure 11th.

A last lap increase in speed split the born 2002 class into four separate groups, with Charlie Gibson just getting the verdict over fellow frontrunners James Harrison, Will Corkill and Corrin Leeming in the final lunge for the line. Nicholas Kissack took fifth ahead of Aaron Lund, Shellan Leeming (1st girl) and Louis Dean. In the born 2001 and earlier grouping Adam Kelly was too strong for Lucas Mudie in the final rush for the chequered flag. Sam Batey lost contact with the two leaders and had to settle for third ahead of Kaitlin Slack, who pipped Emma Draper for the girls' prize.

The racing bike events brought the evening's action to a close. In the under 10's Charlie Gibson notched up his second success of the night, but in doing so had to fend off a strong challenge from James Harrison, who had been very active at the front of the race. Aaron Lund won the battle for third from Zac Walker, Charlie Moss and Will Corkill.

Recently crowned British champion William Draper went from the gun in the under 12's but was soon reeled in by Thomas Bostock, Tosh Teare and Adam Kelly. The quartet stayed away to the finish where Draper outsprinted his three companions for the victory. Max Walker was fifth and Emily Bridson the first girl in sixth position. In the under 16's twenty five lapper Leon Mazzone had the edge on breakaway companions Matt Davies, Matt Bostock, Matt Draper and Owen Dudley in the final sprint. Dudley was dropped by the leaders at one point, but worked hard to get back up to them and contest the finish. Elizabeth Holden, Sophie Black and Phoebe Ferguson were the top three girls in sixth, seventh and ninth positions