Race 12 report
The mood was definitely upbeat and as the sun came out, it was a perfect afternoon for the last race of the Winter series. The only downside to the finale for the series was a crash after the finish line at the end of the 3rd category race. 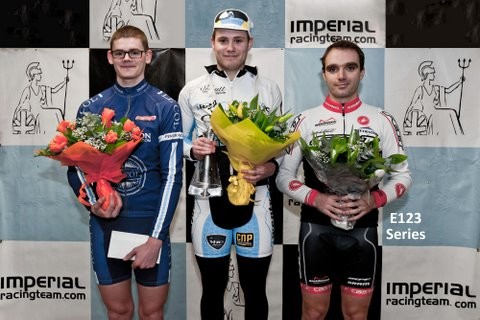 4th Category Race
The 4th cat race produced a surprise with Liam Stones (4s Road Club) breaking away on his own after half distance and holding on to his lead to win by 16 seconds. The bunch was led in by Jon Munns and Phil Holland (Arbis LLP/Roy Pink Cycles RT). The WyndyMilla 4th cat. prize was awarded to 12th place finisher Peter Green (CC Ashwell) who can look forward to a WyndyMilla ‘go faster’ cycle fitting at their Manor Farm Cycle Centre in Seale.

3rd Category Race
In the 3rd category race, previous 4th cat winner Conall Yates (In Gear Quickvit RT) produced the same effort as Liam had done to ride away and finish on his own. This is a remarkable feat considering that in January he was still a 4th cat! Jamie Pine (Le Col) took the series honours overall with consistent performances. The Maxifuel prize was awarded to 13th place finisher, Jai Watson (Dulwich Paragon ). He receives a Maxifuel pack comprising rucksack with Viperactive energy fuel and gels, bottles and T-shirt. 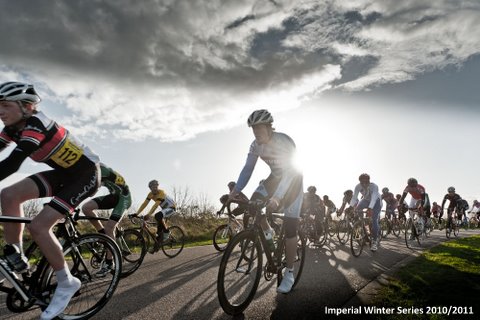 The Elite/1/2/3 race started more cautiously with the riders consolidating their positions rather than taking chances and losing out. But with attacking rather than with defensive riding more likely to succeed, Lewis Atkins (Twenty 3C Orbea), the overall leader took off after 25 km and the initiative was his and his alone.

Tao Geoghegan-Hart (CC Hackney) went across to Atkins and there was hesitation in the main group before several riders slipped away to join the leading two.  Firstly Andy Betts (Sigma Sport) and then his team mate Jerone Walters and later other riders bridged to form a leading group of 10. However, such was the pace that several lost contact namely Ashley Holding (GB MSTina RT), Arjan Planting (Dulwich Paragon) and Michael Widera (Inverse Racing/Cyclaim) leaving a leading group of Walters, Betts, Atkins and Jake Martin who gradually pulled away and opened a gap of one minute 30 seconds.

However, the main group still had life in it and super time triallist Steve Legg (Police Sport UK CRT) pulled away on his own with 10km to go. It was a courageous effort but, with 5km to go, it eventually drew a few riders across - Phil Hersey (Eagle RC), Geoghegan-Hart, Phil Holloway (Southend Wheelers) and Simon Henley (Team Corley Cycles).

Tom Smith (Felt Colbornes), lying in 2nd place overall, said he was happy to stay in the main group with the Perfs Road Race in mind on Sunday, the first race of the season on the road.  With two Sigma Sport riders in the leading four, it was expected that either Walters or Betts would attack and although trying several times in the last 5km, it was Atkins and Martin who were equal to their surges.

Finally, in the sprint, Martin tried his damnedest to distance Atkins but Lewis’s experience saw him cross the line first for another win with Walters and Betts 3rd and 4th. Geoghegan-Hart lead the second group in with Tom Smith and Vince Halpern (AW Cycles) leading the main group home. This was a fitting end to a fine series of races. 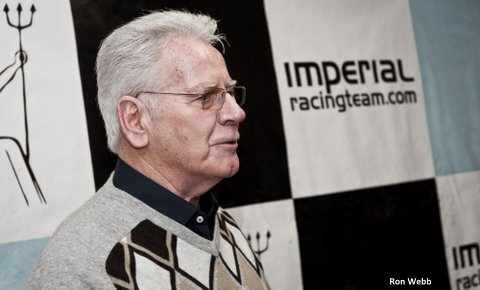 Ron Webb, designer of the velodrome at the London Olympics venue, was a special guest.

In the E/1/2/3 races we have again welcomed back old friends and met new ones and are glad that this mix keeps the racing and the series fresh. It was particularly good to see Lewis Atkins back. He first raced in the Imperial series in 2006/07 – and is now a consistent winner and a great ambassador for the sport and his sponsors.

The presentation was held inside the clubroom for the first time with special guest Ron Webb presenting the prizes. Ron said a few words about his design of the track for the London Olympics and hoped that many of the riders present would make use of the very fast unique track both before and after the Olympic event.

His message must have had a bewitching effect as his request for questions was met with deathly silence! The lucky draw included further prizes from series sponsor WyndyMilla and Maxifuel as well as £100 vouchers from Sigma Sport. The Doug Collins Combative Rider award went to Jake Martin who without doubt has been the most attacking rider. 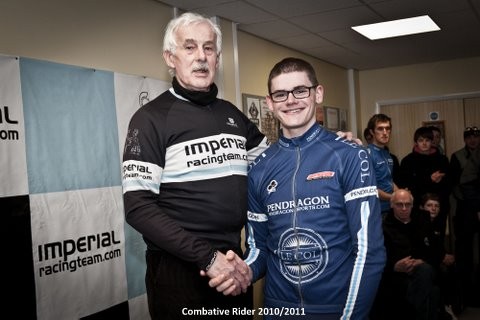 When interviewed, he said that he was looking forward to ‘smashing it up’ on the road in the coming months! Overall, Lewis Atkins thanked the Collins clan for organising the series, Henry Furniss of WindyMilla for his sponsorship and finally Alison the first aider who luckily, with the exception of the last day, had very little to do. Finally Mike Clark of Sport and Publicity presented Lucy with a bottle of wine and his sincere thanks on behalf of everyone for her dedicated efforts.

Each year, we review the format of the series to consider what has worked and what needs improvement. We appreciate any feedback received and try to take this on board. Despite being knocked back badly by the weather (we lost more races in the first 4 weeks than the total over the last 11 years!) we responded by adding another race on a Sunday.

For the first time, we have had a lead sponsor and are most grateful to Henry Furniss of WyndyMilla for his commitment and enthusiasm and also for bringing Maxifuel with him. This year we stuck with the two race format with 3’s and 4’s on the circuit at the same time and feel this went well with everybody respecting the need to keep apart.

We consider that smaller fields, whilst slightly disappointing from an organiser’s viewpoint, has helped minimise the number of crashes and we see no reason to switch the race direction to clockwise.

This year after consultation with Mark Doel, we introduced a mini series for Women and are absolutely delighted with the response. Beforehand, we would have settled for a field of 10-15, so to have 15-20 in all three races was a tremendous boost for us. Thank you all for your support - the racing was brilliant as well!

Thank you again from all of us to all of you – we hope you have a safe and successful Summer of racing and look forward to seeing you at the circuit on the 3rd December 2011 for the next Imperial Winter Series. Go to www.imperialracingteam.com for all the series action and photos. 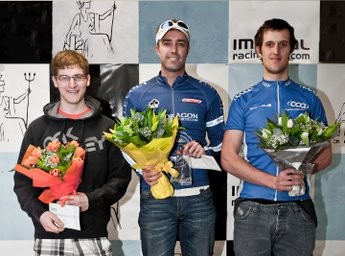