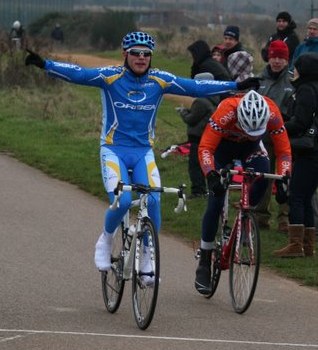 Race 10
It was a bitterly cold day with the strong wind tending to neutralise any attacks although a number of riders in the 3rd cat race made fierce attacks off the front. After 49 minutes of racing, the 4th cat race came down to a bunch finish with Rory Wilkinson (Dulwich Paragon) just beating Lewis Norris (Progressive Cycle Coaching Dev Squad). In 3rd place was James Fletcher (Inverse RT/Cyclaim) who was followed by Ben Smith (Welwyn Wheelers).

The WyndyMilla 4th cat prize is awarded to 19th place finisher Chris Rees (Pearson Cycles) and he can look forward to a WyndyMilla ‘go faster’ cycle fitting at their Manor Farm Cycle Centre in Seale.

Similarly, the 3rd cat race finished together but David Ladkin (Kingston Wheelers) with an exceptional burst of speed in the last 150 metres just kept hold of the win from Jamie Pine (Le Col) with only under half a wheel between them. Popular De Ver rider and long time supporter of the Winter Series, Vaughan Luff with Rob Griffiths (London Phoenix CC) in 4th place.

The E/1/2/3 race started at great pace again with Jake Martin (pendragon-lecol-colnago) shooting off the front almost immediately. However, this time no one went with him and he was brought back after 2 km alone at the front. Felix English (Science-and-Sport) did attempt to cross but was caught. Then after 10 km,  Alexander King (Cyclefit Racing Team), Ashley Holding (GB MSTina RT), Tom Smith (Felt Colbornes), Allan Ridler (Team Cycle Kingdom) and English did open a gap but perhaps too early to achieve a significant lead on the main group. 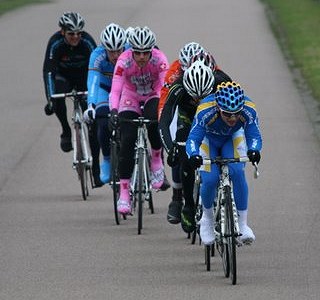 They moved away smoothly and working well together looked unlikely to be caught although in the main group, English, Martin and Smith, who all surprisingly had missed the move, worked very hard to keep in contention. The eight continued to distance themselves from the chase group, and soon there were continual attacks from King and Moss but Atkins was strong and vigilant and covered the moves.

With just 1 km to the finish, around the top hairpin, Moss attacked hard and strung the group out but to no effect. It was a very hard fought effort to the line where strength more than speed was to count. Pilkington was at the front with just 100 metres to go and it looked as if he had done enough to win but Atkins was determined and clawed his way past him for the line with Cotterell taking an excellent 3rd place holding off Planting and strong finisher Holding. 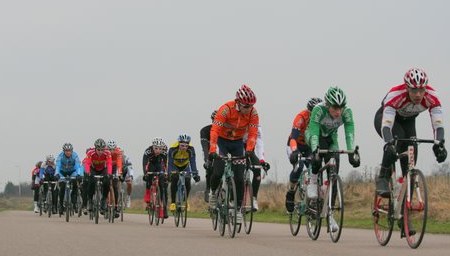 Moss’s effort told as he tailed off in 8th place, he really deserved more. Jo Skelton (Look Mum No Hands!) held off Vince Halpern (AWcycles), Tom Kruger (45 Road Club) and Smith leading the main group in. Another enthralling race with action all the way.