Last year saw the biggest ever increase in cycling on the UK’s National Cycle Network, with 40 million extra journeys made on bike than in 2010, according to a new report ‘Cycling Revolution’ released by charity Sustrans to mark the start of Bike Week. 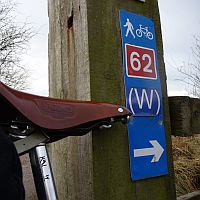 The report highlights how 484 million journeys were made by bike or foot on the network of paths and quiet streets in 2011, bucking the trend of a national decline in cycling and walking on our roads, as reported by National Statistics.

A third of cyclists now using the National Cycle Network could have driven but chose not to, relieving 52 million car journeys from already-congested roads.

Traffic-free walking and cycling routes pay back four times more than they cost in less than ten years – a much higher return on investment then other forms of transport.

Sustrans is calling on the Government to recognise the economic benefits of cycling and walking and invest heavily in this area to help turn the tide on rising levels of obesity and sky rocketing petrol prices.

“Cycling and walking are the answers to our rising petrol prices and expanding waistlines, but we need safe routes to feel comfortable travelling by bike and foot.

“People across the country are crying out for routes where they can get off the roads and make safe, healthy, cheap and green journeys.

“It’s time the Government had the foresight to properly fund cycling and walking.”

The report also reveals that:

For more information on the National Cycle Network go to www.sustrans.org.uk