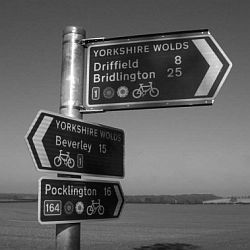 The route was officially launched on 13th July and is part of Visit Hull And East Yorkshire's (VHEY) Yorkshire Wolds Development Programme. The route goes west from Beverley to Market Weighton and Pocklington, as far north as Malton, across to Bridlington in the east and then back through Driffield, passing through 47 East Riding towns and villages.

The Wolds are often ignored as a Yorkshire tourism destination, with the Dales and the Moors often taking the limelight, However, the route's creators hope that it will raise the profile of the area as a destination for cycle tourists, with the emphasis on cyclists spending a number of days in region and savouring the many delights along the way.

The Cycle The Wolds project has been partly funded by the Coast, Wolds, Wetlands And Waterways Leader scheme, which is part of the rural development programme for England, with funding from Europe and Defra, and is managed by Yorkshire Forward.

The website for the Yorkshire Wolds Cycle Route can be found here - at the time of writing the site is still under construction. However, route maps area available from tourist information centres in Hull and East Yorkshire.