With under 12 hours to go before the Fourcross World Championships, we talk to Katy Curd and Scott Beaumont about their seasons so far and what it means to race for the rainbow jersey.

British fourcross has taken a hammering in 2010. Dan Atherton's spinal injury was the lowlight of a year to forget, a year which has featured zero British men in a World Cup final.

And although British women have faired much better - Fionn Griffiths winning in Maribor and Katy Curd third in Val di Sole - the search for a home World Champion in mountain bikings newest discipline continues.

Despite a quiet season, both Scott Beaumont and Katy Curd are upbeat about their chances at Mont St. Anne, as Luke Webber found out...

Anyone who has been reading your rider diary will know that your 2010 season has gone really wrong - and unfortunately for reasons out of your control...

"I can safely say that the year has been one to forget so far. A week before the first World Cup of the season in Houffalize, I lost a stone and went there like a wet lettuce, feeling like I lost all my strength. I rode safe but ended up getting sixth which was a great start to the year all things considered and it confirmed all the training I had done over winter had gone to plan and even dropping back 10%, I was still way above my level in 2009.

"From there I went to Maribor. I had my strength back, but I had a crash and that severely damaged the ligaments in my left foot, which has defined my 2010 season."

What did that mean for the season?

"Fortunately, with my result from Houffalize I knew I had qualified for the World Championships team; however, I knew I was in good shape so wanted to continue racing and get some results. I did anything to race - at the European Series and the Fort William World Cup I had my foot strapped up and wore one shoe two sizes bigger than the ‘normal' foot.

"What I really needed though was intense physio and rest, so I was enforced seven weeks off of the bike."

What did that mean for the season?

"Last year I won every race in the British Fourcross Series, and the overall, this year there was no chance of that, and along with it no chance of an overall placing in the World Cup Series.

"Watching the Leogang World Cup at home, it was really hard, it was the first time I ever watched a World Cup on TV and I don't want to do it again. It was an interesting time."

How did you handle the comeback, after so long off the bike in the middle of the season?

"In some ways, I think it helped, it staved off that mid-season burnout you get when you're just living out of a bag and racing. So I was excited to come back. My first race was the World Cup in Val di Sole, where I was ninth, but I felt I was better than that."

How about Mont St. Anne - what are your thoughts on the course there?

"I've raced there since 1997 and it's my favourite venue in the world, I get a good feeling from being there. I have been second three times in World Cups, I ride the terrain there well, the tracks that they build I normally really like. I can't wait to get over there. I loved the track there last year and ended up finishing tenth. It's a massive shame Dan (Atherton) can't be there, it's his kind of track too, but hopefully I can fly the flag.

What are your aims for the race? Obviously, last years World Champs didn't treat you so well.

"Last year, to go all the way to Australia and go out in the opening round bought it all home. One moment of lost concentration really ends all your chances of making it through the heats - let alone to the final. So this year will be different."

And how about the final training - is the ankle strong again?

"My training has been all about sprints and gates, and with the timeframe I've had post-injury it's nice to have a day to day programme that takes you up to the Worlds. I'm in great shape at the minute and I'm feeling really good, the ankle is fixed up and I'm ready to race." 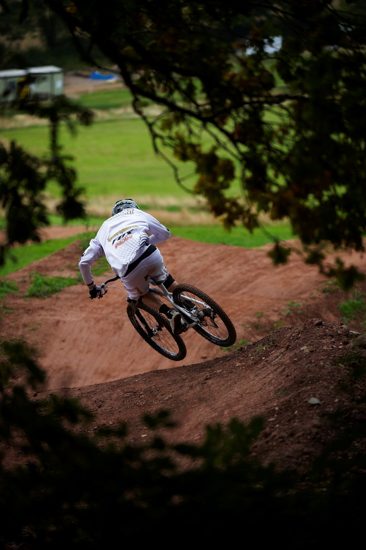 Last time you made the British team for the World Championships was back in 2007 at Fort William - and that was for downhill. So what's changed?

"This year at the big races, I have only done fourcross - even when there has been a downhill race on. I still enjoy downhill and it is good to improve your skills, but I can only focus on one big race at a time. That's why I have been focussing on fourcross more.

"I said to my trainer it is what I want to do and it does help not doing downhill at World Cups where there are both races - especially now the schedule is so tight. This year I have raced fresh - physically and mentally."

Do you miss racing downhill?

Not really. I did practice in Val di Sole but I wasn't having fun so I pulled out. I didn't want the risk of crashing, plus I knew I could do well in the fourcross, which is what I went for really.

Was getting to the Worlds the big aim of the year?

"Definitely - because I have not been there for a few years. But the main reason I am racing in Canada is because of my consistency and being injury free. In previous years I would crash a lot - usually in downhill - and have a lot of injuries. This year, although I had a bad start, it is all coming together, especially getting on the podium at the Val di Sole World Cup."

What has been the big change to your approach this season, resulting in selection?

"At Fort William I made some big mistakes which were a wake up call to get my head screwed on. Each race I do now I learn a lot from. In most race situations you don't have time to think, it's a reaction save and that's when things go wrong."

Taking that approach to the Worlds, what do you think is possible?

"The aim is to go out there and win it; I'd be over the moon with a top three. I think that's realistic, I have been training a lot and improving through the year. It's my first time racing in Canada, so I'm just looking forward to the whole experience."

You can watch Scott and Katy race for the rainbow in Canada LIVE tonight at around 1am.