Uk Bike park was dry and sunny and the course was nearly dusty in places for the opening round of the 2009 national 4-Cross series.
There was a great entry for the first round this year's series with a swap from the traditional season opener at Chicksands to the hard packed stone and flint of Dorset. 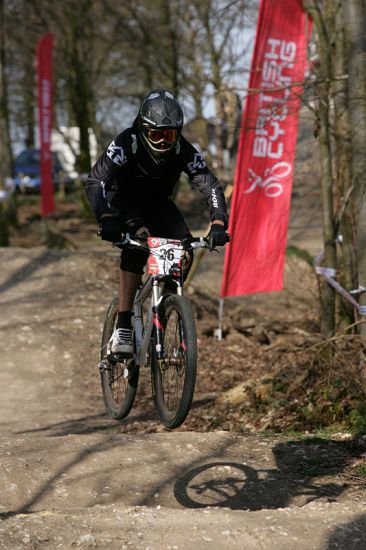 The course is built on hard stony ground with a long first straight with ends with a tricky quad section before entering the first tight berm, then off into double and then the choice of going round the long right hand berm or the tight inside line which leaves you with less speed to enter the mogul section with three different lines. The best option was hit the middle mogul and land just to the left of the next one to give a clean run through which is easy when you are leading but when your racing elbow to elbow this whole different ball game. Then it's onto the left hand hip down into the final berm corner which is built up the side of the trees into the short sprint to the finish.

The Second corner would prove to the real decider in most of the racing with most of the overtaking going off in the mogul sections. Last year's series winners got there new Number 1 plates so everyone can spot who the guys and girls then need to beat.

Racing started in lovely Sunshine - so who had been doing their winter training?

Juvenile - Dominic BARDEN was winning all his motos and took the win in the final with little Joe BUCK in second.

Youth - Alex METCALFE won the Juvenile series last year and continued in the same form to take the win in his first Youth race. Adam Thomas rode well to take second and will be hot on the heels of Alex at the next round. Isaac MUNDY would be another rider to look out for this year. He was really going quick but got T boned off the track in his Semi Final but was showing really good form on the day.

Juniors - this category was stacked with 20 riders and with quarter finals it make for quite an action packed day for the guys. Mike Yard last year was going well and has been training all winter and this really showed as he was soon winning all his qualifying motos. However, he fell foul of line cross at the start and got disqualified from his Semi final. But he will be another one to watch out for in 09. Tom Knight last year Youth Series winner took the top honours on the day and will be off to race a couple of World Cups this year along with 3rd place Scott Roberts, Gregory HOLLOWAY looked to have been winter training and took 2nd place on the day.

Spank were on hand to give out prizes to the top 3 three in seniors who picked some nice green rims and handlebar and stem combos. Spank will be at every round to hand over more goodies to different category at each round.

Masters - this category saw the return of Dominic BENT and Marc MCHALE and it looked liked these guys had been training hard over the winter. Dominic was flying down the track and took the win on the day from Marc, with series regular Paddy Baker in 3rd wearing the tightest skin jeans ever seen on man his size (Photos will no doubt appear on face book!). Dom also picked up the Halo Wheel Set to given to a different class at every round of the series this year.

Veterans - this is a great class of older guys but they still want to win a much as any one and David HERMAN on his little single speed was ripping it up in his first 4X race it was the speed of Jason Carpenter of Dargon Downhill fame that keep Dave off the top spot.

Women - this class is starting to grow with new riders and Kim Bent returning after a couple of years absence to try and regain her National Series title which is now held by Charlie PHILLIPS riding for the new 4Mountain team. Manon CARPENTER is the 16 year old daughter of Jason and her dad's skills have certainly rubbed off on the young Manon as she went on to take 2nd place in her first 4X race!

In the final it could have been all different if Suzanne LACEY had not fallen off coming down over the logs at the start. She took a hard fall to the ground and needed to Paramedic skills of Extreme Medics to check her over before being allowed to ride down and finish the final to loud applause of the spectators. 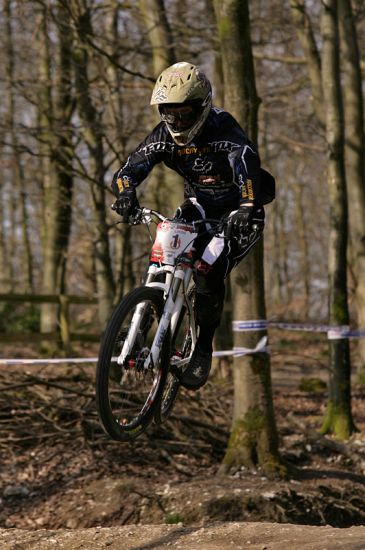 Elite - The Elite class was expecting to see the new 4mountains rider Liam Phillips take up the challenge of racing 4 Cross but after snapping his chain for the 4th time he decided to watch from the side of the track.

16 riders lined up for the start with new riders moving up into the Elite everyone is out to beat the Current Series Champion Scott Beaumont.

Lewis LACEY now signed up Chainreaction race team and riding his new prototype Intense hardtail made a clean sweep of his 4 motos. Will Evans was another rider all signed with a new deal from Morewood bikes who was flying down the track.

The final race of the day had Beaumont, Lacey, Evans, Ogden all lined up on the gate. It was going to be a drag race out the gate and quick hop of the four logs just after the start and then power down over the small table with small left hand kink in the track. The riders got bunched up before leading into the quad and at the first berm Beaumont had got the snap and was first into the corner.

He now had the choice of taking the tricky inside line or go round the long berm. Lacey in second went for the long outside berm giving him good speed into the moguls. Evans took the inside line and Oggy was chasing them all down in 4th place. Beaumont made a quick sprint out the corner to hold off Lacey. Meanwhile Evans was trying everything to find away past Lacey in the moguls but it was another Beaumont win followed by Lacey, Evans and Oggy.

The top three of Beaumont, Lacey and Evans hot footed it away from the podium with their prize money and custom made Hope Trophies to catch a plane to South Africa for the first 4X World Cup of the year.

The next round of the nps4x series is a double header at Bridgnorth on May 23/24th - All the stuff about the series on www.nps4x.com 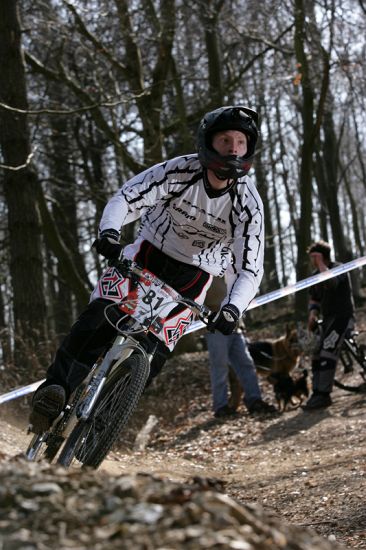 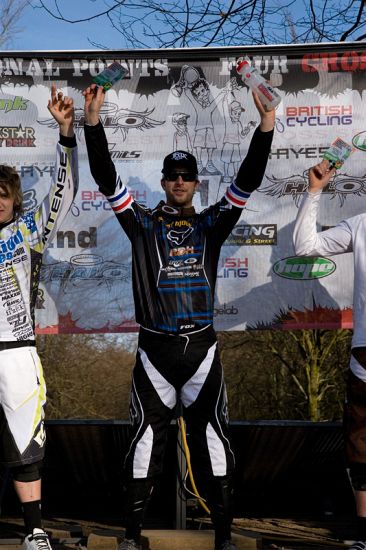