Joe Nally took a fine win in the opening round of the 2016 British Cycling Junior Road Series on a challenging 67-mile course around Boughrood in Powys.

The Hardie Bikes first-year junior held off the favourites to take a solo win on the long drag to the finish line at Llyswen. Owen Dudley (Isle of Man Cycling Academy) rolled across the line to take second, while Speedflex’s Conor Davies had to be content with third.

It was Dudley who made the opening move of the race, jumping away almost as the flag dropped as the neutral section ended with the tight, twisty lanes through the village of Cwmbach and Boughrood allowing the Manx rider to sneak away.

Matt Draper (Velocity Globalbike) also bridged the gap to Davies and the pair were away. A chase group of three - Matt Radford (Wolverhampton Wheelers), Conor Davies and Theo Hartley (DFL In-Gear) - took to chase the lead pair down but the gap remained at around 15 seconds. The main bunch looked to be content to sit and peg the chasers at 20 seconds. 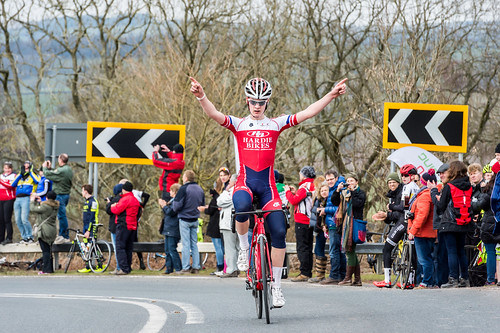 There was no real change for the first half of the race as small attacks went off the main bunch. James Tillet (Wales) and Gabriel Fowden (Eastern Region) tried to move across to the chasing three but to no avail, and were soon swallowed up by the main field.

With the race approaching half distance, a group of 12 tried to chase the leading pair down. Crossing the Llyswen Bridge across the River Wye, they looked well organised and the main field splintered into small groups.

As the race approached Boughrood once again the lead had changed. A new group of four had taken the lead, Will Roberts and James Tillet (Wales), Morgan Hughes (Pro Vision SJ Academy) and Jonathan Wong (Salt Ayre Cog Set) were heading up the race from a chasing pair of Joe Lineham (RP Vision RT) and Owen Lyons. The quartet looked as though they may stay away for the final few laps but it speed got the better of Wong and he dropped off the pace on the finish climb.

Tillet and Hughes upped the pace on the penultimate lap, but a flurry of small attacks soon had the bunch back together until the bell when Stephen Dent (SpokesRT) jumped away.

Hughes responded and chased the new leader down, the main field being led up the hill by Hargroves Cycles’ Harry Yates. The lead was up for grabs, until Nally made a play through the S-bends at Boughrood.

The first year junior was almost allowed to have his few minutes off the front, but sensing a win was possible he hit the bottom of the finish climb alone and was able to hold enough time to cross the line 14 seconds ahead of Dudley.

“I didn’t think I was going to get the win at the end, they were catching me really quickly on the climb but I stayed away,” said Nally. “I attacked with about half a lap to go, and caught the break. After about 20 seconds I went for it.

“It’s my first road race as a junior – I’ve only ever done crits before this, and I’m here on my own without any team mates.”