Abi Smith had to fight to the very end, but was finally crowned North West Youth and Junior Tour champion after an exhilarating concluding stage in Lancaster.

Campinense - Velo Performance’s Smith had taken the stage win on day two of the British Cycling Junior Women’s Road Series event on Sunday, and backed up that performance with another dazzling win on Bank Holiday Monday.

Smith had a GC lead of three seconds heading into the Third Stage, and powered out of the last corner to cement victory overall, ahead of Sophie Lewis with Amelia Sharpe (Liv Halo).

“I really wasn’t expecting to win today,” revealed Smith after topping the podium. “It was so tight at the top of GC I felt I had to contest all the primes and time bonuses.

“I’d have been happy with a podium but knowing how my legs felt yesterday on the hills, I thought I might have a decent sprint finish today.”

Racing on a tight criterium circuit around the campus at Lancaster University, a course which measured barely a mile in circumference saw the riders completing a bewildering 35 laps in search of victory in the GC and series overall.

The early action saw a series of solo attacks off the front of a fast-moving bunch as riders went in pursuit of valuable time bonuses on the primes.

Lewis (Team OnForm) was the first to have a dig and Lucy Gadd (Storey Racing) managed the best part of two laps dangling off the front of the bunch.

But it was largely a case of surge, string out, and regroup, as the peloton brought everything back following the primes.

With half an hour of a 90-minute race to go the race was largely shut down with the realisation that nothing was going to stick off the front, and the bunch set themselves up for a sprint finish. 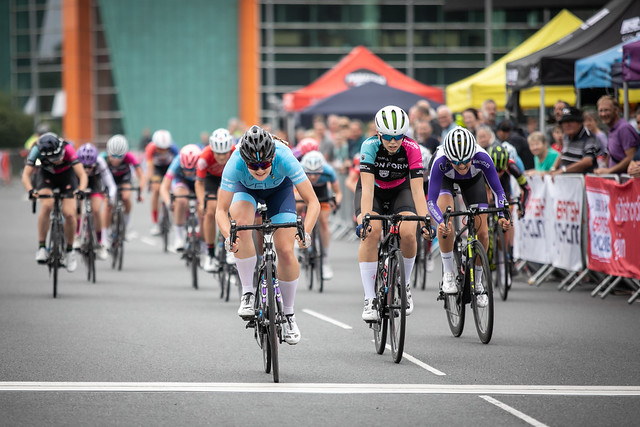