Following the opening of the new BMX track in Stanley Park back in the summer, this past weekend saw the launch of the brand new Go-Ride Club, ‘Blackpool BMX Club’.

The new club will be based at the Blackpool BMX track and will hold regular meetings and events for those interested in taking up the sport, regardless of their skill level. In order to support the development of the sport and the new club, Blackpool Council presented the new club with a cheque for £1000 which will help with their start up costs.

The club will organise training sessions for any young people interested in learning from its BMX coaches, as well as taking part in national level races and events.

The club has been set up with help from British Cycling, and as a part of this, former BMX world champion and Go-Ride coach Dylan Clayton will be available to coach the youngsters and will also be working with local schools to introduce more young people to the sport. 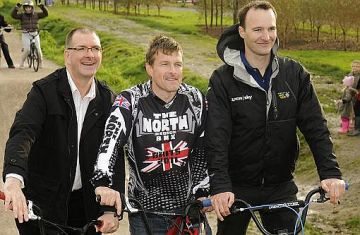 Already, two national level BMX riders, Andy Hill and his daughter Imogen, have signed up to become members of the club. Andy is ranked 10th in the country in the male veterans category whilst Imogen is ranked 2nd in the U9 girls.

Cllr Graham Cain, Cabinet Member in Blackpool Council for Tourism and Culture (far left) said: “Since the BMX track on Stanley Park was opened, it has been really successful, so to have an organised club is a great idea. I’m delighted that we can help to start up the new Blackpool BMX club, which will provide lots of enthusiastic riders with a way of improving their riding techniques and competing in national competitions.

“Hopefully the new club will make the most of the top class facility at their disposal and who knows, maybe we’ll see a future BMX world champion trained here too!”

John Mills, Coaching, Education and Development Director, British Cycling said: “British Cycling is proud to be working in partnership with Blackpool to promote and develop cycling. We are working together on everything from Go-Ride for children and young people, to Sky Ride for families and of course cycle sport at all levels.

“The BMX track is a fantastic facility and together with a range of new facilities across the UK, this will provide a lasting legacy from London 2012. We wish the new BMX club every success.”

The BMX track is the longest, national standard, BMX track in the country and was funded by Blackpool Council, British Cycling, NHS Blackpool and Cycling England.

Check out The Hub's new Facebook page for the latest Go-Ride updates. The more 'Likes' we get the better!

Getting the most out of HSBC UK Ready Set Ride

The toolkit, which will be distributed to each and every one of British Cycling’s 1845 affiliated clubs across the country, contains advice, tips and best-practice examples.

We can’t wait to show you what club life is all about! Simply search for your nearest Go-Ride Club to get started