Lancaster with Morecambe is one of the original Cycling Demonstration Towns, getting its status in 2005 and with it a host of improvements in terms of cycle routes, parking and other facilities. The city’s riverside and canal provide the framework of Lancaster’s cycle routes, with the iconic Millennium Bridge the keystone.

Lancaster has a well developed network of cycle routes, linking the town with Morecambe on the coast and the surrounding countryside.

The Millenium Bridge is the centrepiece and local symbol of the cycle network, crossing the Lune and providing the vital link between Lancaster centre and Morecambe. The Lancaster-Morecambe Greenway is a three mile long traffic-free path making it easy to commute by bike between the towns.

The River Lune Millennium Park stretches along the southern bank of the River Lune and provides a traffic-free commuting and leisure route into the town from north and south. The path runs 9km east to the village of Halton and Caton Green and 9km south along the Lune estuary to Glasson Dock. The Millennium Park forms part of National Cycle Network (NCN) routes 69 and 6.

The Lancaster Canal Towpath (part of NCN Route 6) is a further traffic-free artery into the city, crossing the impressive 60 foot high Lune Aqueduct on its way into the town centre.

15% of staff cycle to Lancaster University. It is linked to the built area with an off toad cycle path.

Within the city centre there are cycle lanes on the main one way street network, toucan crossings giving access to the central area and contra flow cycling on side streets. 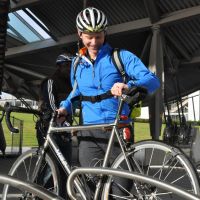 Lancaster’s Cycling Demonstration Town status means that the town is well provided with bike parking. A full list of cycle parking facilities can be found here.

There is a direct cycle route to the Railway Station from the Millennium Bridge. From the south you can follow quiet roads, cycle paths and the canal to get to the station.

Lancaster Station has 44 secure lockers plus cycle stands on platforms 1 and 3 and at Station Road. In terms of taking bikes on trains in the area, check with individual operators’ policies here.

Situated as it is in the heart of some awesome cycling country, it comes as no surprise that Lancaster has a variety of cycle shops. Destination Cycles is in New Road with Leisure Lakes also on Penny Street in the town centre. There’s also The Edge Cycleworks in Chapel Street. Use our bike finder to find shops in your area.

Due to Lancaster’s connected nature, it’s easy to escape into the countryside and coast on the area’s many cycle routes. Celebrating Cycling has a range of leisure guides and maps with great ride ideas for recreational riders and families. Morecambe Promenade with outstanding views across the Bay to the Lakeland Hills is one best seafront cycle routes in the country.