The walled city of York may be steeped in history but it’s bang up to date when it comes to cycling infrastructure. York has long been a cycling stronghold but since 2009 and its inclusion in the Cycling Cities and Towns initiative, the city’s infrastructure has been enhanced to rival any in Britain.

The result has been a marked and measurable increase in cycling in general and commuting in particular. Cycling City York’s workplace survey findings from 2011 suggested that a remarkable 15 percent of residents cycle regularly, with the figures as high as 35 percent in some pro-active local employers.

Two long distance National Cycle Network routes converge on the city. National Routes 65 and 66 form the Way of the Roses route which runs roughly east-west through the city, connecting York with Lancashire in the west and the Yorkshire coast in the east. NCN Route 65 runs south from the city on the traffic free York-Selby cycle route, joining the Trans Pennine Trail (NCN 62) at its southern end.

York’s ‘Orbital Route’ circles the city, overlaid on top of an inner network of local routes, both on road and on traffic free paths, providing ways of cycling safely into the heart of the city and out to York’s Clifton Moor industrial estate, the Monk’s Cross Retail Park, the university and the York Business Park. For more details download the York Cycle Map.

The Cycling City York project, set up to deliver the Cycling Cities and Towns project, cited increasing the quality and availability of cycle parking as a major objective. Now the city boasts over 50 on-street parking locations in its central core alone, chief amongst them the Cycle Hub located on the popular cycleway along the banks of the River Ouse. The adjoining riverside path also has a new direct link further along, with York Railway station. This was funded by Cycling City York, and is accessed through the short stay car park at the station's north end. The Cycle Hub has been created in a former electricity substation building and boasts secure parking for 100 bikes, a bike shop, showers, toilets and changing facilities. The Cycle Hub is run by the Cycle Rescue Project, which re-cycles bikes for local resale or donation to worthy projects.

As befits a city with a long history of cycling, York has a comprehensive network of bike shops, with large chains Halfords and Evans rubbing shoulders with around a dozen independents including Cycle Scene, Cycle Heaven and York Cycleworks.

The excellent York Cycle Map from iTravel York website gives a full overview of cycling facilities in York and is available as a free PDF download here. 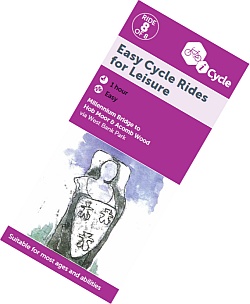 If you're hooked on cycling and just can't get enough, iTravel York's excellent series of eight leisure route guides are available to download here.

iTravel York - for comprehensive up to date information on cycling provision in York, cycle training, latest news and opportunities to get more involved in the ever growing cycling scene in the city.

York Cycle Show - the Cycle Touring Club's annual celebration of cycling drawing in cyclists from the city and way beyond.