Gee Atherton made the most of home advantage as he stormed to victory in the elite men’s race in the third round of the HSBC UK | National Downhill Series at Rhy-Y-Felin.

The Wales-based Atherton Bikes star followed up his impressive triumph in the second round at Fort William by making it back-to-back victories with a scintillating showing in tricky conditions.

In the women’s elite race, Becci Skelton topped the podium after producing a dominant performance to finish clear of her nearest rival, Chloe Taylor, in second.

With many of the elite riders opting to stay in Europe in preparations for the next World Cup, or out of action due to injury, Round 3 of the HSBC UK | National Downhill Series was wide open.

The venue, Rhyd-Y-Felin is a classic downhill track; long and fast with open rocky and roots sections giving spectacular views across the valley while challenging pilot and machine.

Proceedings started off dry and dusty but it wouldn’t be a typical British downhill race without a wet, slippery finale and Round 3 proved no different with the rain cutting in just in time for the elite men’s final run.

In the elite men’s seeding runs, it was the Atherton Bikes duo of Gee Atherton and Charlie Hatton who stormed to the first two spots, with Adam Brayton (Hope Factory Racing) narrowly nudging ahead of Joe Brendon (Intense Racing UK) to take third.

As the heavens opened it was only Atherton that seemed to be able to tame the track, coming first on home turf a mighty 11 secs slower than his seeding run but still two secs clear of Breedon.

The conditions took their toll elsewhere, with Hatton and Brayton both falling way down the rankings, leaving Josh Gleave (Twelve50 Bikes) to clean up third.

It the elite women’s race, it was Becci Skelton all the way, taking a convincing win ahead of Chloe Taylor, while Meg White took third to finish off the podium places.

Tea Jenson was the rider to beat in the junior women’s race, and she couldn’t be toppled from the top spot, taking the win with a near 2 second advantage from runner up Phoebe Gale, who in turn took nearly 3 secs over 3rd placed junior Kara Laing. 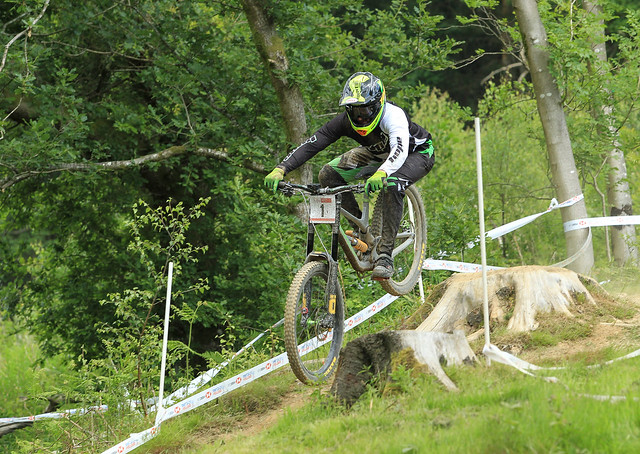