Grant Ferguson and Evie Richards clinched victory on a compelling day of racing in round three of the HSBC UK | National Cross Country Series at Aske Estate, Richmond.

Despite a heavy downpour during the night, the course was hardly affected, leaving the riders to battle their way through thick, loamy singletrack and rock-hard bumpy fields and making for an interesting day of racing.

Although illness had disrupted her preparations, Richards left that well behind her as she once again led from the front, stringing out the women’s Elite race from the word go.

As she increased her lead lap after lap, the battle was on for the remaining podium spots.

Keen to retain her overall lead, Marlena Drozdziok did what she could, taking second just over seven minutes down, while Richards’ team mate Ella Conolly held strongly onto third, a further 3.44 behind.

"Because I’ve been ill recently we were just going to treat this as a training ride and play it by ear and if I wasn’t feeling great then just pull out,” said Richards.

“Luckily I felt good and just went hard and kept the pressure on up front. I love climbing, so this course suited me perfectly, and sometimes when you know there are five specific climbs you can just count them down in your head.

“I thoroughly enjoyed the whole course, the organisers have done an excellent job.

“My World Cups start next weekend so we’ll see how that goes but I’m sure the competition will be tough, so this weekend has but me in good stead hopefully."

Olympian Ferguson bettered his last appearance at the first National Cross Country Series event, with a commanding win in Richmond.

The race started in earnest with a group of eight riders, including series leader Phil Pearce and Ferguson, taking up the early gauntlet.

Ferguson bided his time and by lap three had decided to ride his own tempo, opening up a narrow margin.

Having done so he pressed home his advantage, relishing the steep nature of the course to take the win with over a minute to spare over second-place Frazer Clacherty.

Pearce had to consolidate his place in the overall standings with third, another minute behind.

"There was a group of us early on, I just sat in there biding my time, while Giles Drake, Phil Pearce and David Fletcher put the pressure on,” said Ferguson.

“Then by lap three, I decided I wanted to hit the singletrack through the woods as first wheel.

“I didn’t intend to pull away, but I noticed a bit of a gap start to open, so I thought I’d try and open it up a bit more and then just buried myself for the rest of the race.

“I’m pretty pleased to take the win, it’s been a long time coming, I’ve not actually won a race since the National Championships!

“I’m looking forward to getting stuck into the World Cups now, the first one is next week with the second one the weekend after so hopefully my winning form will carry on." 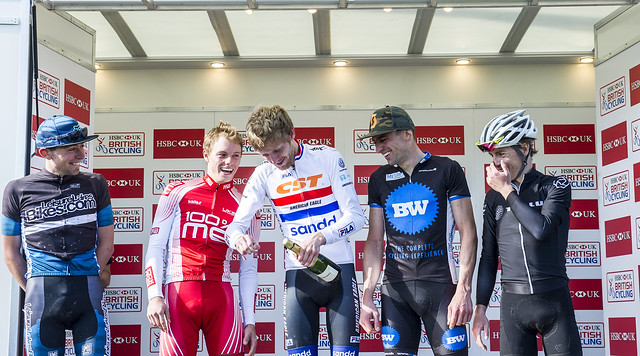