Helen Wyman pulled on the national stripes for a tenth time as Grant Ferguson won his maiden elite title at the HSBC UK | National Cyclo-Cross Championships.

Earlier in the day Tom Pidcock and Evie Richards put on awesome displays of powerful and precise riding to take the Under-23 titles at the Hetton Lyons Country Park.

While in the women's Junior category race there was success for Harriet Harnden, and Sean Flynn took the win in the Junior men's race.

Wyman back on top

“It’s really important to win the National Championships – you get to wear the jersey all year, which is really exciting,” said the 36-year-old.

“I knew it was going to be a good battle today and I really had to think about how to win that race because Nikki was super strong.

“I think it must have been exciting for the spectators. It was probably less than 15 second for the finish and I hope everyone enjoyed it. I really enjoyed being in the battle.

From the opening climb Wyman forced the pace and was joined by Brammeier as the rest settled for a third-place battle.

National Trophy winner Beth Crumpton was initially chasing alone before being joined by Team Kineses’ Hannah Payton, who then attacked and gapped her domestic rival.

However Crumpton worked her way back up to Payton, who then payed for making the effort as she was gapped herself – allowing the Storey Racing rider to ride away for bronze.

With three laps to go Wyman opened a gap on Brammeier with attacks both on bike and foot during uphill sections.

The MUDIITA Canyon rider responded, clawing her way back, but when Wyman went again on the uphill sections Brammeier could not follow – Wyman eventually winning by around 15 seconds to take her tenth title.

The national cross country mountain bike champion added the cyclo-cross title to his collection by attacking reigning champion Field (Hargroves-Ridley-Montezuma’s) – who was going for a sixth national jersey - with two laps to go and charging clear to victory.

“It means a lot, I’ve been trying really hard for this so I’m really happy,” said the Scot.

“I knew Ian and Liam would be the main competition so I was fully prepared.

“We were together at the early part and I didn’t realise Liam had crashed so there was a bit of a gap and me and Ian were away, so I thought ‘well, now is a good time to have a shot’.”

From the outset it was Steven James (Hope Factory Racing) who led the charge up the starting climb and forced a gap, taking Field, Ferguson and Liam Killeen (Malvern Cycle Sport) with him.

Field’s pace got rid of James, and then when the defending champion pushed on the descent it was the two mountain bikers who were struggling and a slip by Killeen led to a bike change and a gap forming.

After biding his time Ferguson was next to attack on the flat and increased his lead on the wooded climb as Killeen clawed his way back to Field who was unable to respond.

It proved the decisive move as he pressed on and allowed himself time to celebrate as he crossed the line, with Field holding off Killeen to take second.

Telenet Fidea Lions’ Tom Pidcock took his first Under-23 national title in emphatic style using his skill and strength to ride away from his rivals and win by almost a minute – even bowing for the crowd on the line.

The 2017 Junior National and World Champion bunny-hopped the hurdles at the end of the opening lap to form a gap on his rivals and then extended his lead as the race wore on.

“It’s a championship so you’ve just got to try and get as much time as you can in case something goes wrong – that was what I was planning to do,” said the champion.

“There was a lot of people here today, I think maybe as many as at Bradford last year so it’s pretty special.

“It’s good for British cyclo-cross that a lot more people are taking part in it and it is growing."

Ben Turner (Beobank-Corendon) returned after a season racing in Belgium and led on the opening lap with Pidcock just behind.

However, the talent of Pidcock, from Otley, shone as he rode clear to leave Turner chasing alone in second throughout the race.

The battle for bronze was an exciting one with local rider Thomas Mein (Hope Factory Racing) initially leading the chase before he was joined by a small group of five other riders.

Daniel Tulett (Specialized Racing) eventually joined Mein and as the two traded blows their rivals faded away – with Tulett making the decisive move for bronze with just over a lap remaining.

Evie Richards retained her under-23 women’s title in emphatic style, leading from the front and blowing her rivals away.

The former world champion from Malvern - who won a senior World Cup race in Namur before Christmas - powered up the opening climb forming a gap and increased her lead to over a minute by the finish.

“I knew I wanted to get away early on because it’s such a fast course and I haven’t been feeling great in the last few days – I felt a bit empty but I managed to hold the lead and that’s what I wanted to do,” said the two-time champion.

“I’m quite unconfident sometimes when it comes to the races. I was really shocked with that race in Namur, so every time I come to the race I’m really unsure of what I’m going to do.

“I just take each race as it comes and today was another good race so hopefully the confidence will build a bit before the World Championships.”

Tom Pidcock and Evie Richards the future of world Cyclocross, incredible bike riders and a joy to watch! #nationalCXchamps

There was drama in the opening road start with Sophie Wright (100% ME) hitting the barriers and seeing her chances dashed while several other riders also came down.

The medal placings in the under-23 was a tough battle between Ffion James (Abergavenny Road Club), Anna Kay (EDCO Continental) and Emily Wadsworth (100& ME).

A surge from Kay saw James put in trouble, leaving the two Under-23 rivals to battle it out for bronze – with the former eventually crossing the line solo to take the medal.

Ahead of that battle, Harnden was storming the Junior competition with Alderney Baker (Team Empella Cyclo-Cross.com) and Amy Perryman (Hargroves-Ridley-Montezum’s) locked in a close battle for second and third – Perryman eventually powering clear of her rival to take silver.

Sean Flynn (Edinburgh RC) held on to a narrow advantage from start to finish to clinch victory in the junior men’s event from a fast-charging Ben Tulett.

From the outset it was Flynn who flew out of the blocks and gapped his rivals, opening up a 15 second advantage on the chasers.

European bronze medallist Tulett (Beeline Bicycles RT) suffered a mechanical on the opening lap, having to get off his bike to remove a stick from his spokes.

However he soon worked his way back through the chasing group and closed in on Flynn, with Jenson Young (PH-MAS/Paul Milnes/Oldfield ERT).

Tulett’s chase on Flynn was too much for Young and the gap between the leading pair held at around 15 seconds as the Scottish rider held his narrow gap.

With a lap remaining Tulett had the gap down to less than 10 seconds but Flynn rallied and held on for victory, with Young coming in third. 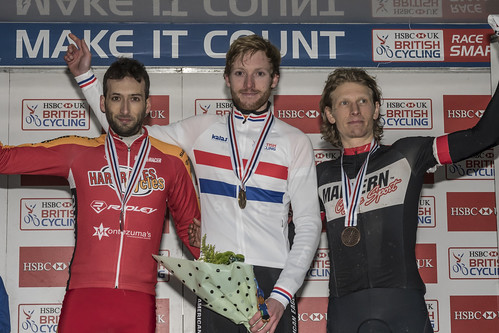