The 100km Tour of the Black Country takes in 20km of cobbled roads, stony farm tracks and bridleways in the West Midlands, Worcestershire, Shropshire and Staffordshire. Inspired by the epic European Classic Paris-Roubaix, it includes fifteen unpaved and cobbled sectorsand finishes on a large outdoor velodrome, at Aldersley Stadium on the outskirts of Wolverhampton.

The Tour of the Black Country is supported and promoted by V-Sprint Racing, a club based in Bromsgrove, Worcestershire, which was set up by Jim Varnish, former cycle speedway World Champion. His daughter Jessica Varnish, the 2012 Olympian and two-time World Record Holder also rides for the club.Local resident and four-time World Champion and Tour de France rider Hugh Porter (the BBC’s ‘Voice of Cycling’) is going to drop the flag to start the event (very fitting since the start is on Hugh Porter Way), and Wolverhampton professional Andy Tennant (former Team Pursuit World Champion) is currently down to ride.

The 15 unpaved sectorsvary in length from 300m to 1800m, and are all passable on a standard road bike, in all weathers. These sectors are concentrated in the final 40km, with the last sector leading directly onto the back straight of Aldersley Velodrome.Each sector is rated according to difficulty; one star being the most straightforward, five stars being the most difficult. The route is relatively flat, albeit with one challenging cobbled climb: the five-starred Waltonberg. The roads are virtually traffic-free, despite being located close to Birmingham, and the majority of the unpaved sectors are closed to all traffic.

There is also the option of a shorter 60km route, which skips sectors 8-12, but is otherwise the same as the 100km route.

The Tour of the Black Country begins at Aldersley Leisure Village on the western edge of Wolverhampton and proceeds westwards into Staffordshire and then south towards the first unpaved sectors. One of the sectors that best illustrates the nature of the Tour of the Black Country is the rocky but very fast Prestwood Drive. At over 1600m long, it is taken in the slightly downhill direction (at approximately 2%) The latter part irequires great concentration to navigate this four-star sector swiftly and safely.

The most southerly point of the course is the five-star Waltonberg cobbled climb, near to the village of Clent in Worcestershire. At 600m in length, and at a gradient of over 20% in places, with its rough, irregular and broken cobblestones, it exceeds even the infamous Koppenberg in difficulty - a climb which has reduced some professional riders to walking in the Tour of Flanders.

The approach to the base of the Waltonberg is downhill, and the first cobbles can be taken at a brisk pace. The road then bends to the right and pitches up sharply, where the cobbles are very uneven. Towards the top, some of the cobbles have been replaced by bricks, further increasing the irregularity of the surface. Past the farmhouse at the top of the cobbled section, the climb levels out into a wide gravel track, which leads to the open summit of Walton Hill at over 1000 feet with panoramic views over Birmingham and the Black Country.

Following the sweeping descent of St. Kenelm’s Pass, the course proceeds north back towards Wolverhampton and into the concluding series of unpaved sectors via The Field House, Whittington Farm and Gorse Lane.

The long and varied Hyde sector begins with a high-speed charge down a wide, straight, slightly downhill 800m gravel road. It then passes into a short section of bricks and cobbles before passing into a hard-packed mud track, and then emerging in the village of Kinver, famous for its rock houses, carved into the hard red sandstone of Kinver Edge. This sandstone, which underlies most of the route, drains very well and ensures that the unpaved sectors remain passable even during sustained periods of bad weather. 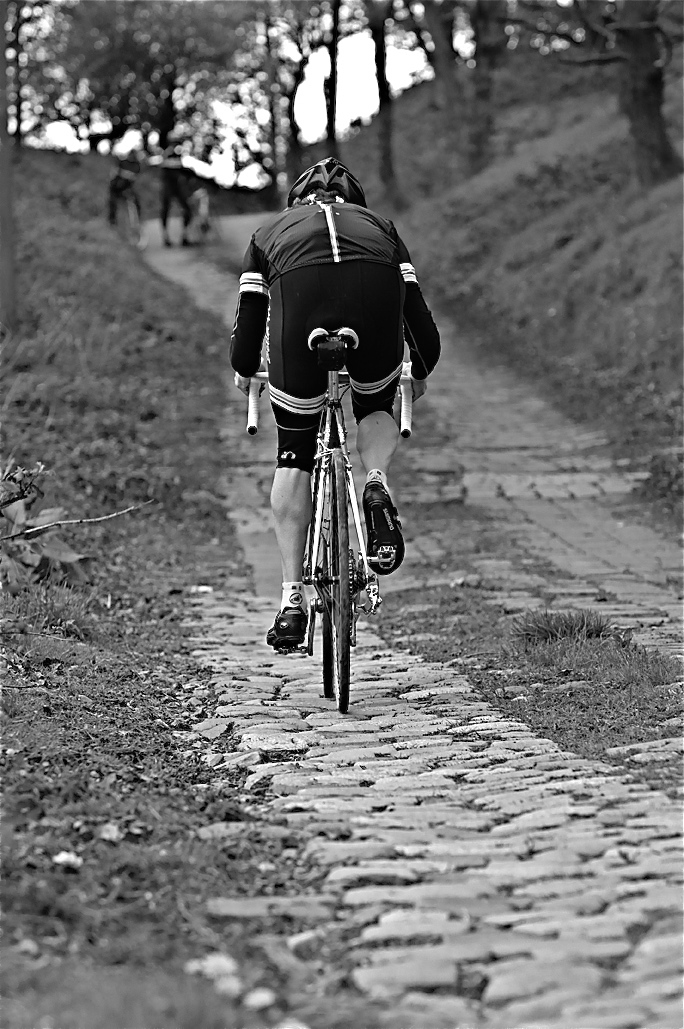 The last substantial unpaved sector at Castlecroft crosses the Staffordshire & Worcestershire Canal close to the major junction with the Birmingham Mainline Canal next to the velodrome, which made Aldersley one the most important centres of the industrializing world in the 18th Century. The approach to the velodrome is via a closed road under a railway bridge which leads through the stadium gates and directly onto the track. Riders finish by completing a lap of the velodrome.

“In putting together this route”, explains event organiser Francis Longworth, “what we were trying to do was to create a riding experience similar to that of Paris-Roubaix, but close to where we lived. Rather than travelling hundreds of miles to France or Belgium in order to seek out interesting and novel cycling experiences, we wanted to create something for ourselves at home - and then make this accessible to others. Only a small minority of professional cyclists ever get to ride Paris-Roubaix and we wanted to try to open up that experience to everyone. We also felt that the Midlands and the Black Country were rather undervalued and underrepresented in terms of cycling events, and wanted to support cycling in the region. The Black Country has a rich and proud heritage both in bicycle manufacture and bicycle racing, and we thought that with a bit of time and effort we could contribute something worthwhile and of value to the local community. We wanted to get away from the rather passive idea that you need to travel to other people’s events in order to do anything interesting, and to emphasise that by making imaginative use of the local resources available, you can create something new and exciting right on your own doorstep”. 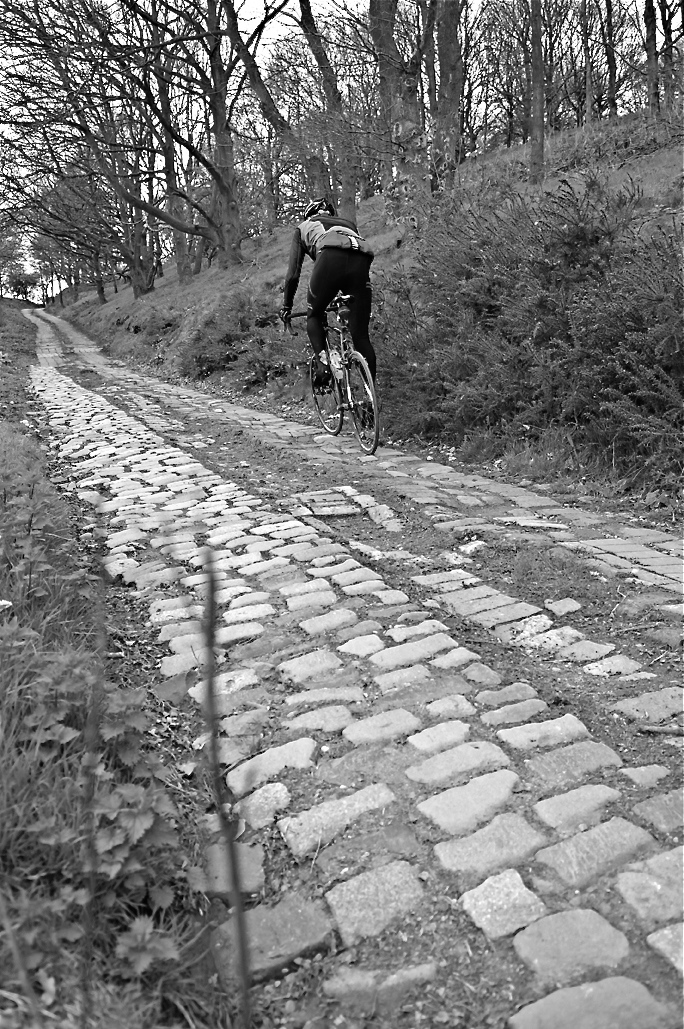 “We’d also noticed”, he continues, “that nearly all of the interesting sportives in Britain seemed to be centred or focussed on climbing; how many climbs, how long, how steep, and so on.We felt that creating a sportive based primarily around variations in the road surface rather than variations in gradient was a relatively underdeveloped and compelling idea; there seemed to be few events in which the excitement and interest came from the variability of the surface. We are fortunate in the Black Country in having an abundance of different types of road surface: cobbles, bricks, stony bridleways, gravel tracks, sandy lanes, hard-packed mud or limestone, each of which delivers its own unique riding experience. The principal appeal of riding on such roads is that the uneven surfaces greatly amplify and intensify the sensation of speed. Although the Tour of the Black Country is relatively flat, the majority of the unpaved sectors are either slightly uphill or slightly downhill at 1% - 2%. Taken uphill they can turn into something of a gruelling slog. In the downhill direction, however, they can be ridden hard and fast in a big gear; twenty-five miles an hour feels like fifty miles an hour. It’s anexhilarating sensation - probably a bit like white-water rafting or skiing over moguls, where the roughness of the ground creates increased G-forces on the body and heightens the feelings of speed”.

Longworth concludes by suggesting that “it’s strange that almost all of the descriptions of Paris-Roubaix and similar races focus entirely on the supposed pain and suffering involved. Of course such races are difficult, but then any race is hard if ridden fast enough. We wanted to focus instead on the exhilarating, thrilling, adrenaline-filled experiences that riding on unpaved roads can provide; the kinds of things that made bicycle racing exciting in the first place”.