I was offered the opportunity by British Cycling (bless ‘em) to participate in this event to mark the inauguration of the Bradley Wiggins Foundation, founded by the great man himself to help young people get into sport. 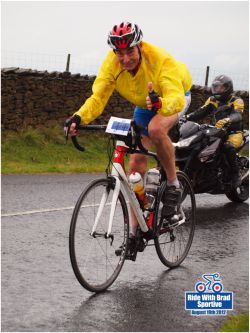 The first hurdle to overcome was the fact that this event took place on my 34th wedding anniversary! I will not weary you with the delicate negotiations that took place – let’s just say that my wallet was considerably lighter at the end of the experience…..

Given a green(ish) light, I organised a B&B in Laneshawbridge – Rye Flatts Farmhouse for two nights, situated about seven miles from the start in Barnoldswick. I did try to find something closer, but no joy. However, this place turned out to be fine – I’ve reviewed it on TripAdvisor should anybody be at all interested.

The die was cast. I got up at some ungodly hour on Sunday morning and cycled to the start. The weather was mild and there was little breeze. Got myself registered for the 100 miler and started attaching various bits to my person and my bike (why are drawing pins so awkward?)

Just as I was doing this, I got a tap on the shoulder. The perpetrator turned out to be Ian Phillips of British Cycling, who had been instrumental in getting me entered to the event in the first place. As we’d never actually met face to face, I asked him how he’d recognised me. Apparently it was a combination of the Team Milton Keynes kit and a picture I’d submitted in an earlier blog of me at the top of Winnats Pass in an earlier sportive that did the damage.

We subsequently met up with Gavin Hughes, a fellow blogger, and we all set off together at around 7.45. I have to say at this point that, apart from the dim realisation that we were in the North West of England, I hadn’t a clue where I was in any detail. Ian’s own blog explains it all far better than I ever could.

Beautiful rolling countryside to start with, nothing at all challenging, until we hit the timed climb of Waddington Fell. In truth, this really wasn’t too bad – it’s a longish pull, but not in the Alpine range. Ian shot off impressively and left Gav and me to it. Unfortunately for Gav, he dropped his phone on the deck, which delayed him a bit. The support we had on the way was amazing – I’m quite used to a few happy clappers on my way around a sportive, but this was on a different scale. Sir Bradley of Wiggins has moved the profile of cycling even more sharply upwards to a quite extraordinary level. Long may it continue.

Not long after the descent, we had to part company – Ian and Gav turned left, and I turned right onto the 100-mile course. Now, I’ve cycled in the Alps, and I’ve cycled in the Peak District, but this was different again. It’s not that any of the hills were particularly long, but there was absolutely no time for recovery – non-stop, seriously challenging undulations in some lovely countryside. In addition, the weather was beginning to turn nasty and eventually I had to don my rain jacket. Some of the lanes were very narrow, gravel-littered and steep – all pretty scary stuff, coupled with some atrocious road surfacing. Despite all this, I felt good and was really enjoying the ride. I only found out later that the rest of the country had been bathed in temperatures in excess of 30 degrees!

There were two other timed climbs – one up the Trough of Bowland (why a trough when it’s so high??) and Nick O’Pendle. One of them confused me totally, because it went DOWN after going over the timing mat and it was ages before it started to go up. I really thought I’d gone the wrong way - fortunately, not. Neither of these again were particularly tough.

However, I got my come-uppance on a brute of a hill near Quernmore – this was after we’d turned back south near Lancaster. I still don’t know exactly where it was – somebody said it was Jeffrey Hill, but I’m really not sure. It doesn’t matter – it was the steepest hill I have EVER climbed. Not long – just steep, certainly in excess of 20% for over 100 metres. Most were walking up it and I nearly perforce joined them. I was going so slowly, bent double over the handlebars, that I very nearly fell into the ditch at the side of the road. I just managed to make it without unclipping, but it was very, very close.

I upped and downed, upped and downed all the way back to the finish in Barnoldswick, and I was mighty relieved to go over the finish line. I was quite pleased with my time, given the fact that the last half of the journey was really tough – this was the second hardest sportive I have done after the Alpine La Marmotte.

I picked up my food and goody bag and had a quick look round for Bradley Wiggins. Nope. Besides, I was soaked through and I had a meal to buy in the evening as part of my anniversary penance, so decided to go back to the B&B for a shower, a rest and a change of clothes. On the way back, the heavens opened big-time – it has certainly been the wettest sportive I have ever done as well as one of the toughest. The goody bag was wringing wet when I got back, which did the impressive glossy brochure of Barnoldswick no good whatsoever. Fortunately, the “Ride with Brad” T-shirt was in a plastic wrapping…..

That shower was one of the best I have ever had.

A truly memorable experience. No, I didn’t get to meet Sir Brad, but as this seems destined to become a regular event, there might be opportunities in the future. It was more than compensated for by a really well-organised, challenging and beautiful ride, a great welcome from the locals, great cycling company and a huge sense of achievement. Also – and unusually for me – I suffered no punctures, mechanicals or even scary moments (apart from nearly falling off on that damned hill…..).